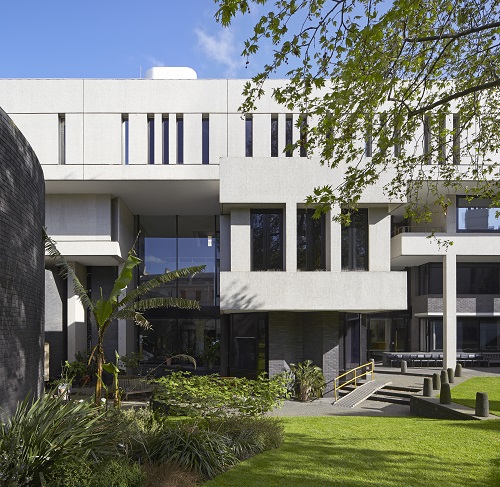 Designed by British architect Sir Denys Lasdun, the RCP is one of only a handful of grade I listed post-war buildings and is a firm favorite at Open House, the annual architecture festival that champions great design for all and opens up London’s most extraordinary buildings to the public.

The Royal College of Physicians (RCP) is one of London’s most important and provocative buildings. Designed by British architect Sir Denys Lasdun (1914-2001), the building is set amongst the Regency terraces of Regent’s Park – one of only ten Grade I listed post-war buildings in England.

The Regent’s Park building was commissioned in 1959 and opened in 1964. It is the RCP’s fifth home since foundation in 1518. The RCP was given permission to demolish a bomb-damaged Nash villa on the site on the condition that the new building harmonised with its surroundings. Lasdun was appointed after making it clear that he would not create a classical building. In 1992 Lasdun was awarded the Royal Institute of British Architects’ Trustees Medal in recognition of his work at the RCP, considered to be ‘the best architecture of its time anywhere in the world’.

The Royal College of Physicians' garden contains 1000 species of plants all with links to medicine. The myriad stories they tell come from diverse cultures, different countries and from every age in recorded history. The beautifully designed garden is a wonderfully calm space in the centre of London. Its unique and bespoke collections of plants offer living examples of the history of medicine from the era of the pyramids of Egypt to today’s life-saving prescription drugs. The medicinal garden will be open throughout the day to Open House visitors with continous tours by RCP garden fellows.

The expertise, the excellent guided tours, the exhibitions, the gardens, the volunteers who were wonderfully welcoming, enthusiastic, friendly and so so helpful. A wonderful informative and enlightening afternoon! Thank you all so much.

Open House London, the world’s largest architectural showcase will take place across the capital on 19 - 20 September. Over 800 buildings across London will open their doors to the public across the two-day festival, alongside a programme of neighbourhood walks and architect-led tours – all for free.

The event gives the public a unique opportunity to explore and learn about how the city is developing, and discover how great design – in architecture, urban design, planning and infrastructure – can transform the lives of everyday people for the better.

The RCP usually runs expert-led, guided tours of the building on the hour and last approximately 45 minutes covering the intertwined history and architecture of the RCP.  Guided tours are free and pre-book only. Tours will include the exterior and interiors of the building involving a fair amount of walking and several flights of stairs. Please ask at the registration desk if you would like the assistance of a folding museum stool during the tour.

Additional multimedia guides are available from the registration desk for self-guided tours.

Booking will open later in the year