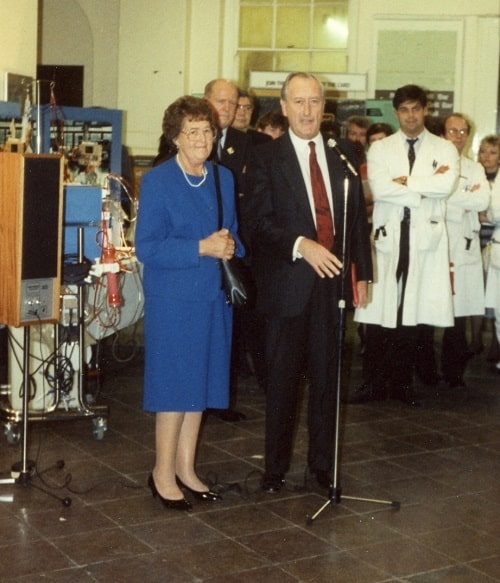 Dr Norman Jones grew up in Rumney, Wales. He studied at Christ’s College Brecon and Cambridge University and on graduating secured a position at St Thomas’ Hospital, where he went on to set up one of the country’s first renal dialysis units. He is a former treasurer of the Royal College of Physicians.

Here he remembers the joy of being able to save patients suffering from renal failure.

The full interview is available on the library catalogue.

It was easy to be blinkered in nephrology; because, I mean when I was a junior doctor, certainly as a student and junior doctor, kidney failure was just death, there was nothing else, and this revolutionised that. Even the primitive methods by today’s standards of the later ‘60s; in ‘68 for instance, the normal sentence, in a sense, for regular haemodialysis, was 15 hours three times a week, and if you developed certain complications, like neuropathy it was more, and that was a tremendous chunk out of the week.

I remember when our unit was being built and it opened in the summer of ’69, we were granted the use of two rooms in the intensive therapy unit at Thomas’, in which to do our dialysis and we could obviously only cope with a very few patients, but by the time it came that we could move into the new unit, we had seven people on regular dialysis going through that pretty well non-stop little unit, but what  I do remember is  that  when we had our, and of course methods were nothing like as sophisticated then as they are now, but when we had our 21st birthday party as a renal unit, five of those seven were there, 21 years later. That, I think, is one of my happiest memories.