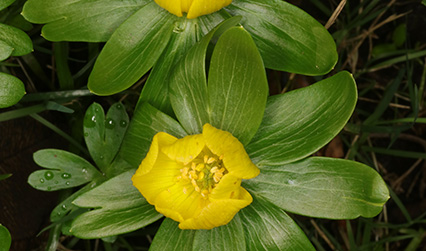 It glows in the sunlight above ruffs of bright, green leaves in late winter and early spring. Flowering en masse underneath the oriental plane tree in the RCP Garden of Medicinal Plants, it is a truly spirit-lifting sight.

The plant’s official name, Eranthis hyemalis, comes from the Greek er, meaning ‘spring’ and anthos, meaning for flower combined with the Latin hyemalis, meaning ‘winter-flowering’. The common name, winter aconite, alludes to the leaf shape, a characteristic by which plants were classified in the 16th century. Winter aconite has similar foliage to plants in the Aconitum genus, which includes monkshood and wolfsbane, and it belongs to the same family, the Ranunculaceae.

All members of Ranunculaceae are toxic, although they don’t all have the same chemical composition. Substantial ingestion of any part of winter aconite causes symptoms of nausea, vomiting, diarrhoea, colic, bradycardia, disturbed vision, dyspnoea and cardiac arrest.

E hyemalis contains pharmacologically interesting chemicals such as khellin. Khellin is a vasodilator but, because of its toxicity, it is rarely used therapeutically. It can be converted into khellin analogues such as sodium cromoglicate, which is used as prophylaxis against asthma attacks, and amiodarone, which has anti-arrhythmia actions and is used for atrial fibrillation and other arrhythmias. 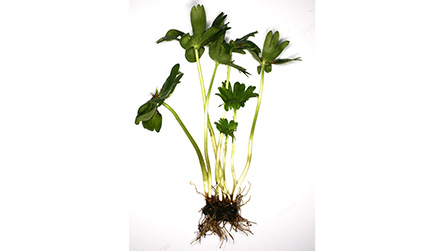 The whole of the winter aconite plant. Photograph © HF Oakeley.

E hyemalis is a clump-forming, full hardy perennial that grows in fertile, moisture retentive, humus-rich soil, in full sun or dappled light shade. It quickly forms large colonies, particularly in alkaline soils. The plant is native to Italy, Bulgaria, the Balkans, Turkey and Iraq but was introduced to Britain in 1596. It was first recorded in the wild in 1838 and is now naturalised in the UK. It provides welcome colour early in the year, and a number of cultivars such as the bronze leaved ‘Guinea gold’ or the double ‘Flore pleno’ are proving popular.

You should plant winter aconite tubers 5 cm deep in autumn and, if conditions are dry, then water them well: the tubers hate drying out. Like snowdrops, which are more tolerant of dry conditions, they need to be planted or transplanted ‘in the green’, ie while the foliage is still fresh and the plants are in active growth. Be vigilant of slugs eating the foliage and smuts (fungal diseases) damaging the plants.

To propagate winter aconite, collect up the seed once it has turned from green to black and scatter it around the lawn or bed or, to bulk up the clump, simply allow the seed to drop before clearing the dead foliage.

Over 1,000 species grow in the RCP Garden of Medicinal Plants: find out more about them in the plant database. The garden is open daily and tours are available.