Skip to main content
Wartime nursing: women on the frontlines

As part of our season of posts about women’s history, today we welcome Holly Carter-Chappell, collections officer at the Florence Nightingale Museum, writing about nursing during the First World War.

Nurses played a crucial role in the care of sick and wounded soldiers during the First World War (1914—1918). Throughout four years of bloody conflict they tirelessly nursed and comforted their patients in casualty clearing stations, field hospitals, ambulance trains, hospital ships and convalescent homes. Little could have prepared these women for the horrors of WWI, as newly developed weaponry such as tanks, machine guns and poison gas caused catastrophic injuries the like of which even experienced military nurses had never seen before.

At the outbreak of war in 1914, nurses had only been involved with the care of the British Army for 60 years. The first time being when Florence Nightingale famously took a party of nurses out to help care for British soldiers at Scutari Hospital during the Crimean War. One of Nightingale’s key achievements was setting up the world’s first professional training school for nurses, which contributed to nursing becoming one of the few respectable career choices for middle class women. 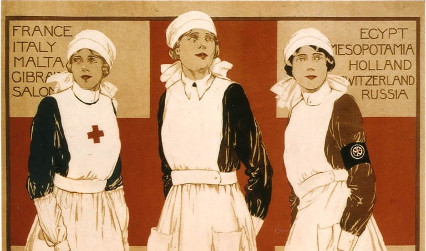 Alongside the trained nurses who signed up for military service during WWI, thousands of women, inspired by Florence Nightingale’s example, joined the Voluntary Aid Detachment to become volunteer nurses. VAD nurses received basic first aid training and were often mentored by the more experienced professional nurses. As the war progressed and the numbers of wounded requiring complex treatments dramatically increased, a shortage of doctors led to nurses taking on more independence and responsibility. 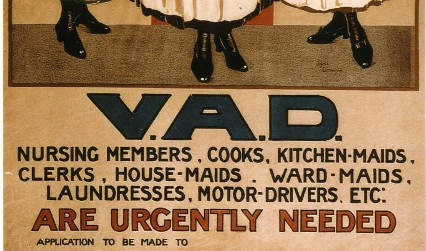 The extremes of war caused a temporary blurring of roles for nurses, who under the pressure of active conflict, frequently crossed the lines between surgery and nursing. A nurse that carried out the routine duty of cleaning wounds would remove pieces of shrapnel and shell, and daily examinations would also involve picking out pieces of dirt or clothing as they rose to the surface. In an emergency, an experienced nurse would even carry out a minor surgical operation. From the second half of the war, nurses were trained as anaesthetists, only to have this role removed from them after the Armistice.

Nursing on the frontlines could be very dangerous; it is estimated that as many as 1,500 nurses lost their lives during WWI. In one incident, 14 Canadian nurses were killed when their hospital ship HMHS Llandovery Castle was torpedoed off the Irish coast in June 1918.

However, by far the largest cause of death amongst nurses during WWI was Spanish flu. The 1918 influenza pandemic was the deadliest pandemic in history, killing an estimated 50-100 million people, and infecting up to a third of the world’s population. It gained nickname of ‘Spanish flu’ due to the fact that neutral Spain was the only country in Western Europe not under wartime censorship, and freely reported the true scale of the pandemic. 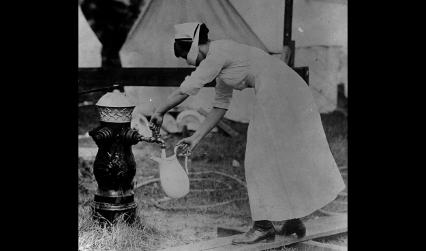 Nurses were the unsung heroines of the Spanish flu pandemic. In 1918, there was no effective flu vaccine, antiviral drugs, or even antibiotics to treat secondary bacterial infections. Patients could experience terrifying symptoms, the most distinctive being heliotrope cyanosis – a progressive blue flush, which started from the extremities and spread: caused by oxygen starvation as the lungs filled with fluids. Explosive nosebleeds were also common, as were vivid and disturbing hallucinations brought on by the patients’ high temperatures.

One of the few things that helped alleviate symptoms was good nursing; keeping patients comfortable, monitoring their vital signs and administering fluids and pain relief. Often nurses would contract the virus from their patients and many died.

After Armistice was declared in November 1918, women who had gained independence during the war years sometimes struggled to return to their previous lives. Many continued to nurse traumatised and maimed soldiers who needed continual care, but the majority of voluntary nurses were expected to abandon nursing for marriage, despite the catastrophic death toll meaning that there was a shortage of potential partners. Some women found themselves in limbo, unable to return to the life they had envisioned before war broke out, yet incapable of moving forward.

Perhaps the inner strength that the nurses found in the horror of the casualty clearing stations and the field hospitals helped them to return to a post-war world that would never be the same again.

Holly Carter-Chappell is collections officer at the Florence Nightingale Museum, and curated the exhibition Spanish Flu: nursing during history’s deadliest pandemic, which is on until 16th June 2019.