The RCP archives contain approximately 3,600 letters. The letters – dating from the 17th to the 20th century – reveal personal and professional interests across a broad range of subjects beyond medicine. The letters in the RCP collection were mostly written to, and not by, fellows of the college. They demonstrate some of these physicians’ eminence in society, and their wide and notable circles of friendship and correspondence. 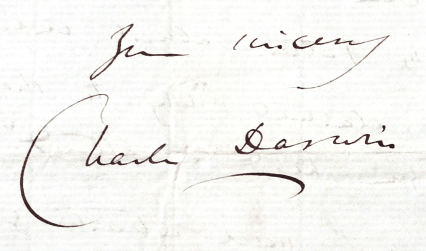 One such letter was written by Charles Darwin (1809–1882) to the physician George Rolleston (1829–1881). The letter dates from September 1861, almost 2 years after the publication of Darwin’s  famous work On the origin of species. In it, Darwin discussed his ideas on modifications of different populations within species.

Rolleston had sent him material to help with his further studies in modifications within species and Darwin explained how they would help his work. Darwin remembered being a very idle person before his, now famous, 5-year voyage on HMS Beagle. However, the scientific journey changed all that and his time on the voyage was characterised by hard work. 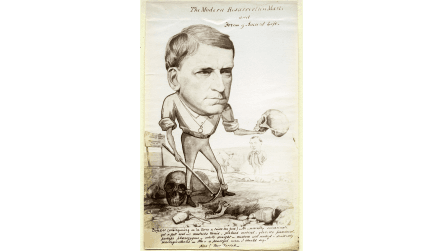 George Rolleston studied medicine at St Bartholomew’s Hospital, but left medical practice and turned to biological research in 1860 after being appointed as Linacre professor of human and comparative anatomy at the University of Oxford. His major work, The Forms of Animal Life (1870), was a pioneering text in the history of comparative anatomy.

Outside his work Rolleston was a man of varied interests. One of the most practical was an enthusiasm for efficient sanitation, something he advocated successfully for in the city of Oxford. 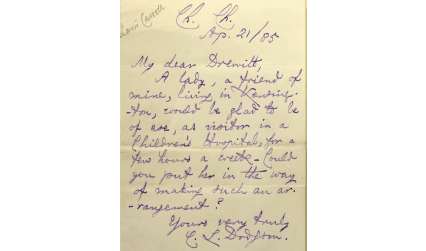 Another letter was written in 1885 by Charles Lutwidge Dodgson (1832–1898), much better known by his pen name Lewis Carroll. Dodgson was a lecturer in Mathematics at the University of Oxford, and wrote books on logic for children as well as his famous Alice series.

Dodgson wrote to Frederick Dawtrey Drewitt (1848–1942), chief physician at the Victoria Hospital for Children, London. He wrote on behalf of a lady friend – unnamed in the letter – who wanted to volunteer as a visitor ‘in a Children’s Hospital, for a few hours a week’.

Drewitt was a prominent physician and in later became a fellow of the RCP. In 1887, two years after Dodgson wrote to him, he resigned from his post at the Victoria hospital He continued to work at the West London Hospital until 1902. As a result of having a private income Drewitt was able to retire completely in 1902, at the age of 54.

For the rest of his life Drewitt devoted himself to the study of birds and plants. He also exhibited as a watercolour artist at the Royal Academy. Just before his death at the age of 94, Drewit wrote ‘I am thankful for a long and happy life, for pleasant friends, … and for an insight into the everlasting beauty and wonder of the world.’