Skip to main content
Touching for ‘the King’s evil’: a short history

To modern eyes, the idea that a king or queen could, by virtue of their status, heal disease might seem extraordinary. This was exactly the premise behind the ‘royal touch’, a practice used for many centuries in Europe.

The custom of healing by the royal touch has a long history and was practised of monarchs of many European countries.  The first recorded British monarch whose touch was claimed to show curative powers was the Anglo-Saxon king Edward the Confessor (1042–1066).  He introduced a ritual for ‘The King’s Evil’, a colourful name for a condition of swollen and discharging tuberculous lymph glands of the neck, also called scrofula.

Edward the Confessor, after touching the diseased patient, ordered that they be maintained at royal expense until they were cured.  During the 13th century this upkeep of the patients was replaced by the donation of a coin, probably a penny, by the monarch to each patient. 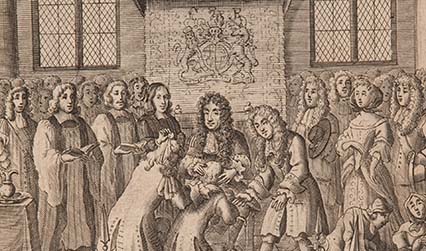 This cure was seen as painless, instant and miraculous and thus became very popular.  The practice of ‘touching’ was seen as an example of divine right of kings, a manifestation of the authority believed to have been granted by God.  It evolved into a ceremony of fantastic proportions: Louis XIV of France is said to have touched 1600 persons one Easter Sunday.  And the English Charles II, while in exile in the Netherlands in the 1650s, was in such demand that a number of potential patients were trampled to death in the rush to be healed.

The gold ‘Angel’ is a coin whose name is associated with its use in royal healing ceremonies. It was introduced into the English coinage in 1465 but it is generally believed it was not used in this connection until the reign of Henry VII (reigned 1485–1509).  The Angel’s name is derived from its design depicting the archangel Michael defeating a dragon, a scene from the biblical book of Revelation.  This image and its purity of gold gives the coin a special resonance.

After receiving the royal touch, the patient would be given an Angel, which had been pierced and threaded on a ribbon, hung round the neck by the monarch as a further means of warning off disease.  Since the Angel was made of gold and weighed 80 grains (about 5g) its use as a touch piece represented a valuable gift.

Shakespeare would have had many opportunities to witness this ceremony for ‘The King’s Evil’ at court.  He described it in the play ‘Macbeth’, transposed to the remote English past.

A most miraculous work in this good King,

Which often, since my here-remain in England

I have seen him do.  How he solicits heaven

Himself best knows: but strangely-visited people,

All swollen and ulcerous, pitiful to the eye,

The mere despair of surgery, he cures

Hanging a golden stamp about their necks,

Put on with holy prayers:  and ‘tis spoken

To the succeeding royalty he leaves

The healing benediction.  With this strange virtue

He has a heavenly gift of prophecy,

And sundry blessings have about his throne

That speak him full of grace.

This practice continued until 1642 when the issue of the Angel stopped and, when because of the Civil War, Charles I was reduced to using small silver coins as touch pieces for patients on whom he bestowed the royal touch.  During Cromwell’s period as Lord Protector, curative touching stopped completely, although patients travelled to France to receive ‘the touch’ from the exiled son of the executed Charles I, or used Angels from earlier ceremonies. 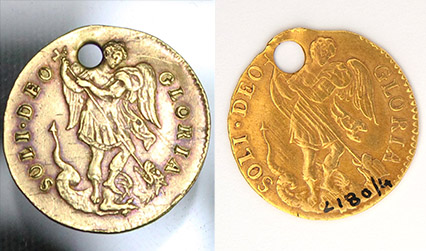 After the Restoration of the monarch in 1660, Charles II quickly re-established curative touching.  From 1660–1664 in the absence of a suitable touch piece, he used foreign gold coin and those of previous monarchs such as Charles I and James I for this purpose.  In 1665 special touch pieces were issued in gold and their design were similar to the old Angel coin.  Many thousands of patients were touched each year by Charles II and each received a touch piece during these ceremonies.

Although it was still practised after 1668 by James II in exile, using silver in the place of the previous gold touch pieces, royal curative touching was not practised by William III or his queen, Mary, it having been dismissed by William as a ‘silly superstition’.  There is certainly no reason why the monarchs touch should have curative powers apart from the sale of the gold touch piece which would provide adequate food to have a beneficial effect on health.

Queen Anne reintroduced the practice during her reign (1702–1714) and special gold touch pieces were issued for use in her ceremonies, but the number of people at these ceremonies was much lower than the in the reign of Charles II.  The death of Anne in 1714 marked the end of this ceremony in England although in view of their supposed curative powers, touch pieces from earlier periods continued to circulate for many years among the sick.  Interestingly the Stuart pretenders to the British throne continued curative touching in their various countries of residence (Scotland, France and Italy) until the end of the 18th century. 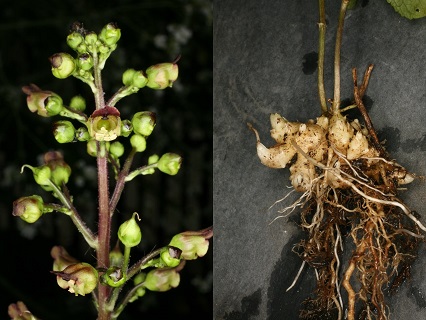 Afterword: a plant for treating scrofula?

The royal touch wasn’t the only historical treatment for scrofula. The plant scrophularia, or figwort (properly known as Scrophularia nodosa) was – as the name suggests – thought to help people with the disease. The plant’s nodular roots were thought to resemble the swellings on the lymph nodes present in scrofula, and according to the theory of the ‘doctrine of signatures’ to be useful to treating the disease. Nicholas Culpeper wrote in 1650 that the root should be hung round the neck of patients with scrofula. By the early 19th century, it was no longer used in human medicine, though was recommended for treating scab in swine. Scrophularia nodosa is one of the more than 1,000 plants grown in the RCP garden of medicinal plants.