Skip to main content
Thomas Young and the decipherment of hieroglyphics

2019 marks the two hundredth anniversary of a landmark article published in the Encyclopaedia Britannica, which outlined the first, crucial steps in the decipherment of Egyptian hieroglyphs. Written anonymously, the writer was later revealed to be Thomas Young (1773-1829), physician, renowned physicist, physiologist of the eye, unlikely expert on life insurance and an all-round astounding polymath.

But, if Young made those initial, ground-breaking steps, he was soon overtaken by the young French linguist, Jean-François Champollion (1790-1832), who, just three years later, announced he’d finally, definitively, cracked the Egyptian ‘code’, while refusing to acknowledge Young’s role. The rivalry between the two men – complicated by intense nationalistic squabbles – continued for the rest of their short lives. 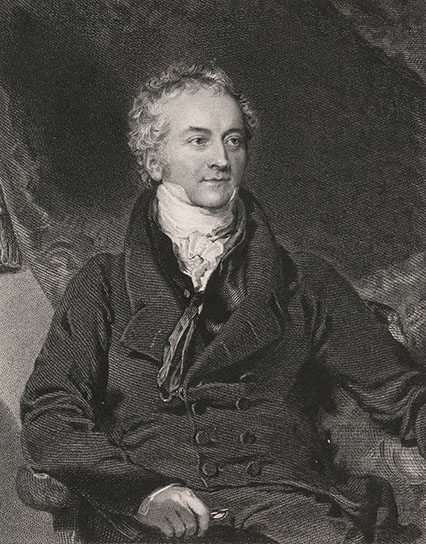 Hieroglyphs were used by Egyptians for thousands of years but, following the conquest of Egypt by Alexander the Great and the imposition of Hellenistic rule, the script gradually ceased to be used. Roman and Greek authors, who could not read hieroglyphs, believed them to be symbolic and not phonetic – a belief which went unquestioned, and effectively hampered decipherment for centuries.

The breakthrough came with the discovery of the Rosetta Stone. In 1798 Napoleon invaded Egypt and, in the spirit of Enlightenment enquiry, brought with him a party of ‘savants’ – scholars, scientists and artists – to record and analyse the history, culture and geography of the invaded land. In July 1799, the Rosetta Stone was unearthed in the village of Rashid (Rosetta) by some French soldiers and was immediately sent to the savants in Cairo.

The stone records a decree given by Ptolemy V in 196 BC and is, crucially, written in three languages: hieroglyphs; a then-unknown script later named ‘demotic’; and ancient Greek, which was immediately translated. The last line of the Greek inscription revealed that all three texts were equivalent in meaning: the stone was therefore a potential key, a means of deciphering hieroglyphics and demotic.

The enlightened savants sent copies of the stone to Paris and other European centres of learning, but the original was confiscated by the British when they invaded Egypt. Shipped to England, it was stamped with a fourth text reading ‘Captured in Egypt by the British Army in 1801’ and ‘Presented by King George III’ and displayed in the British Museum, where the two scripts remained untranslated, an elusive enigma.

It took until 1814 for the ever-distracted Thomas Young to turn his attention to the task of deciphering the stone. Young, nicknamed ‘Phenomenon’ by his Cambridge contemporaries, had shown an early aptitude for languages, as well as mathematics and science. With the encouragement of his mentor, his mother’s uncle, the prominent physician Richard Brocklesby, he decided to train as a doctor, studying in London, Edinburgh, Göttingen and Cambridge. He later established himself as a physician in London, where he continued his investigations as a prominent member of the Royal Society and the Royal Institution.

In 1813 Young wrote a review of a book on the history of languages by Johann Christoph Adelung and was intrigued by a note from the editor suggesting the unknown language on the Rosetta Stone ‘…was capable of being analyzed into an alphabet consisting of little more than thirty letters’. Young spent the summer in Worthing (and then the next four years) mulling over a copy of the Stone. 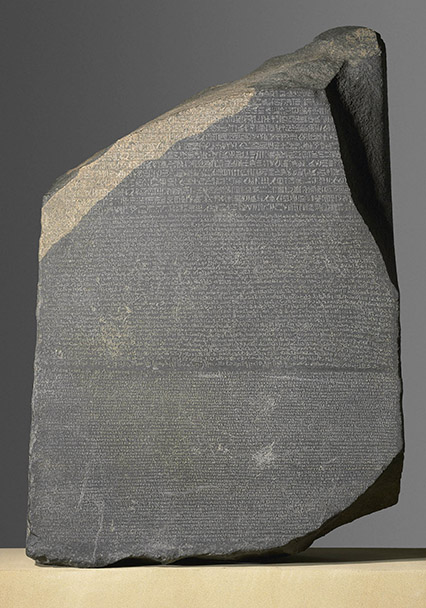 By 1819 he was ready to publish his findings, in a supplement on ‘Egypt’ for the Encyclopaedia Britannica. He said he had spotted ‘striking resemblances’ between demotic and hieroglyphs, the first indication that the two languages were related. Demotic, he believed, was made up of imitations of hieroglyphs mixed with letters of an alphabet: it therefore contained symbolic and phonetic elements. He was able to translate the ‘cartouches’ in the hieroglyphic text, the ovals that surrounded some of the inscriptions. From looking at the Greek translation, Young realised the six cartouches on the Stone must contain the name of the Greek ruler Ptolemy. He broke down the hieroglyphs in the cartouches, working out which symbols had been used phonetically to spell out each letter of ‘Ptolemy’. He was still unsure about the phonetic element in hieroglyphics other than non-Egyptian words, but in his article included proposed phonetic values for 13 hieroglyphs, cautiously labelled ‘Sounds?’ The article also included translations of 218 demotic and 200 hieroglyphic words, including proper names, things and numerals, and a ‘supposed…alphabet’ for demotic script.

Young had done something no one was recorded as having done for more than a thousand years: he had begun to translate and understand hieroglyphs and demotic. But, having made this breakthrough, being Young, he went on to other things. 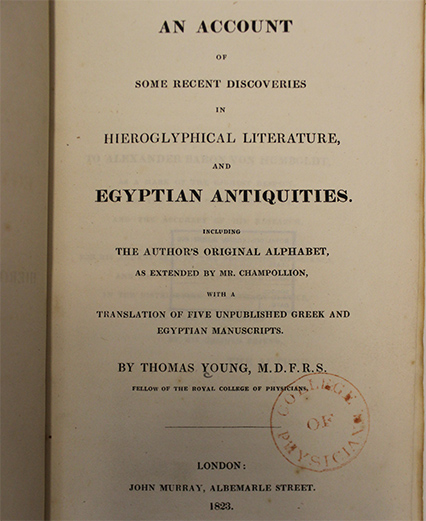 An account of some recent discoveries in hieroglyphical literature. Thomas Young, published London, 1823.

Exactly when Champollion read Young’s article and how far it influenced the Frenchman’s work is fiercely disputed, but Champollion also focused on cartouches, this time found on other monuments, and built up an extensive alphabet of hieroglyphs with their Greek equivalents. On 27 September 1822, he announced his breakthrough at a meeting of the Académie des Inscriptions et Belles-Lettres in Paris. By coincidence, Young was in the city, attended the meeting and sat next to Champollion as he read out his paper – the first time the two men had met.

While Young was enthusiastic about Champollion’s achievement, he was stung by the lack of acknowledgement of his own work. As he wrote to his friend Hudson Gurney: ‘[Champollion] has been wonderfully successful…How far he will acknowledge everything which he has either borrowed or might have borrowed from me I am not quite confident…’ When an acknowledgement was not forthcoming, in 1823 Young published An account of some recent discoveries in hieroglyphical literature, and Egyptian antiquities, giving the book the provocative subtitle Including the author’s original alphabet, as extended by Mr Champollion.

Champollion continued his investigation of hieroglyphics and in 1824 wrote his definitive statement of his decipherment, Precis du système hiéroglyphique des anciens Égyptiens. Perhaps chided by a colleague, an Italian linguist, Amedro Peyron, who wrote to Young ‘…there is universal regret that your versatility is so widely engaged in the sciences – medicine, astronomy, analysis etc etc that you are unable to press on with your discoveries and bring them to that pitch of perfection which we have the right to expect from a man of your conspicuous talents’, Young at last decided to focus, and spent his final few years on demotic. His extensive dictionary was published posthumously.

After he died in 1829 his widow campaigned for a plaque to be erected in Westminster Abbey. Here, among his other achievements, he is credited as being the man who ‘…first penetrated the obscurity which had veiled for ages the hiroglyphicks of Egypt’. Finally, he was given a partial acknowledgement, at least some of the recognition he desired.