Heraldry is an important visual symbol of status and power for families and individuals. Originally granted in 1546, the arms of the Royal College of Physicians (RCP) has become an important part of its identity.

The College of Arms still grants the formal coats of arms, unique to each recipient. Once granted, a coat of arms can be passed down and used by all succeeding generations. Similarly, for institutions, the granting of a coat of arms is in perpetuity, and an important privilege. 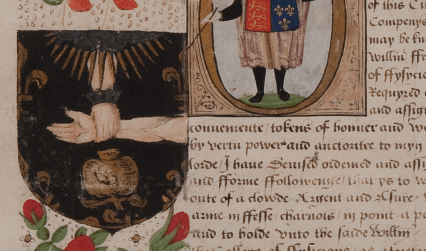 Grant of Arms by Christopher Barker, 1546

The design shows a hand with an ermine cuff coming out of a silver and gold cloud, feeling the pulse of an arm, above a golden pomegranate. The design can be adapted, to match changing artistic preferences. But the basic details of the blazon – a specific description of the imagery – cannot be changed. In the 1546 document, it is described as:

The specific elements which make up a coat of arms are carefully chosen to reflect the identity and interests of the recipient. In this case a hand feeling the pulse is an obvious medical act. The hand descending from the sky indicates divine authority for both the profession and the institution.

The pomegranate is a symbol of fertility and regeneration in classical mythology and in several religious systems. The Greek author Dioscorides mentions it alongside a whole range of treatments for which the various parts of the plant can be used.

It has been suggested that the pomegranate was chosen as a symbol for the College because of its association with Henry VIII’s first wife, Catherine of Aragon. Henry and Catherine were still married when the college was founded in 1518. But the coat of arms was granted in 1546 when Henry was married to wife number six, Catherine Parr, who outlived him to remarry for a fourth time. It is much more likely that the fruit was chosen for its classical allusions.

The RCP grant of arms was one of the items on display in our 2015 exhibition celebrating 800 years of royal authority, power and symbolism using charters, seals and deeds from the Royal College of Physicians collections.

The exhibition, Power and beauty: seals, charters and the story of identity, was on display in 2015.