Skip to main content
Smoke signals: the significance of the 1962 Smoking and health report for the RCP

In 1962 the Royal College of Physicians published a landmark report on the dangers of smoking tobacco, titled Smoking and health. It was the March object in our 2018 Curator’s Curiosities heritage trail.

The publication of Smoking and health marked a new era for medicine, public health and the role of the Royal College of Physicians. The report was a huge success, selling out its first print run of 10,000 copies in just two days, with a total of 50,000 copies distributed in just six weeks.  The report was published worldwide in a variety of languages. In America, 30,000 copies were sold in a matter of weeks. The report marked a real change in direction for the Royal College of Physicians, ensuring that the college would be an authoritative voice in matters of public health. The RCP continues to be involved in smoking and air pollution matters today, and in 2016 co-authored the report Every breath we take: the lifelong impact of air pollution, outlining the dangerous impact air pollution is having on the nation’s health.

The beginnings of RCP involvement on the issue of smoking and public health were turbulent. Whilst the college had published reports on issues of public health in the past, most notably during the great plague of 1665, it usually avoided issuing advice. Becoming involved in matters of public health exposed the RCP to criticism from people inside and outside of the college.  In fact, the RCP initially dismissed the idea when it was first put to the then president Lord Brain (1895–1966) in 1956. Brain’s initial response was that the RCP should not give advice, stating that ‘If we go beyond facts, to the question of giving advice to the public as to what action they should take … I doubt very much whether that should be a function of the college.’ 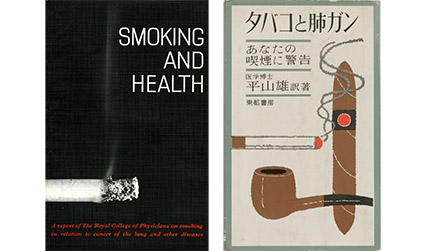 The following year the RCP gained a new president with a very different point of view. Robert Platt (1900–1978) was a president cast in a very different mould to Lord Brain. Early in his presidency, when he was asked whether the college should intervene he replied ‘Of course we should’. Platt, who had recently given up his chain-smoking habit, was determined to modernise the college and the issue of smoking and public health presented him with a perfect opportunity to do so.

Today we are fortunate to live in a society where the number of people smoking is in decline. The idea to us that the link between smoking and cancer could be a controversial opinion seems ridiculous. However, when the RCP published Smoking and health in 1962, the public’s attitude to smoking was very different.

By the mid-1950s smoking was habitual for a vast number of adults in Britain. Around 12 million men smoked an average of fifteen cigarettes a day, with 6.3 million women smoking on average 8 cigarettes a day. Smoking also provided lucrative tax revenue for Government and tobacco firms were a giant post-war industrial employer. During the Second World War, employment in the tobacco industry was larger than it had been in 1938, whilst tax revenue from tobacco products had increased from £84 million in 1938, to a whopping £409 million by 1945. 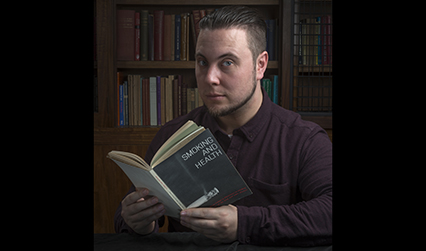 All of these facts and figures serve to illustrate the context in which the RCP chose to publish their Smoking and health report. Smoking was a hugely popular habit and a source of employment and revenue for the Government. It is hardly surprising that the RCP suffered some hostile reactions from some members of the press. By the time the college published its following report, Smoking and health now in 1971, a columnist for the Daily Telegraph stated that the RCP was ‘taking the place of the Church as the main threat to human freedom.’

A new era for the RCP

Regardless of the reaction to the report, for the RCP it marked a step change that continues to this day. The RCP continues to be involved in smoking and air pollution matters today, and in 2016 co-authored the report Every breath we take: the lifelong impact of air pollution, with a progress report added in 2018, outlining the dangerous impact air pollution is having on the nation’s health. The RCP’s Tobacco Advisory Group continues to investigate the harmful impact of smoking today.

Visit the RCP and see Smoking and health displayed in the Treasures Room until 15 April 2018.