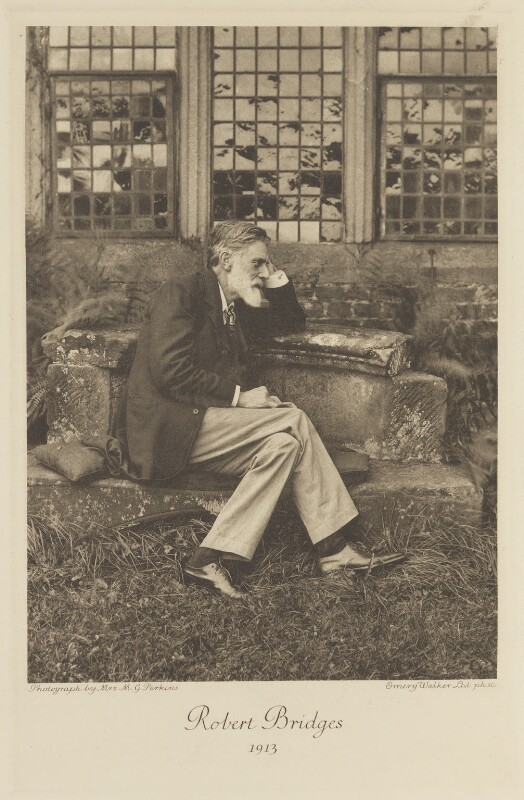 Robert Bridges (1844 - 1930), a physician at the Great Northern Hospital in London before he left medicine in 1881 to write full-time, is the only poet laureate with a medical background. During his long life he wrote poetry, verse plays and literary criticism, but is perhaps best known today for compiling the poems of his friend, the Catholic writer, Gerard Manley Hopkins.

Born in Walmer, Kent in 1844, the eighth of nine children of John Thomas Bridges and Harriet Elizabeth Bridges née Affleck, Bridges came from a solid, upper middle class background. He attended Eton, where he first began to write poetry, and then studied classics at Corpus Christi College, Oxford. Apparently a very convivial and clubbable man, at both institutions Bridges made close friends and connections, which he maintained for the rest of his life.

While he had a private income, he was expected to enter a profession and earn a living. Deciding on medicine, in 1869, he enrolled at St Bartholomew’s Hospital Medical School, just at a time when a more rigorous curriculum was being introduced, reflecting recent advances in science, medicine and surgery. Bridges went up to Oxford in 1873 to take his final examinations, but – ironically for a writer – failed his written tests. He spent the next year travelling in Italy and studying medicine in Dublin and retook – and passed – his finals in 1874.

His first post was as a house physician to Patrick Black (1813 - 1879), senior physician at St Bartholomew’s. A conscientious doctor of the ‘old school’, Black emphasised the intuitive art of close observation of patients, in contrast to the strict scientific analysis Bridges would have learnt at medical school. Despite his busy medical life, Bridges continued to write poetry throughout his training and, when he resigned as a house physician in June 1876, he sent Black a farewell poem in Latin, Carmen elegiacum, written, he said, mostly at breakfast.

Bridges’ next post was on St Bartholomew’s casualty ward. In 1878, a little over a year after he started, he wrote an article for the St Bartholomew’s Hospital Reports, describing the conditions on the ward and the almost impossible task of seeing all the patients. Of the more than 151,000 patients ‘relieved’ at the hospital between 1877 and 1878, Bridges calculated he had seen 30,940 (or 148 a day). He also noted the noise, which meant it was difficult to use a stethoscope. He described a vivid soundscape of a Victorian ward:

‘…the rattle of carts in the street, the hum of voices inside, the slamming of doors, the noise of people walking about, the coughings of all kinds, the crying of babies, the scraping of impatient feet, the stamping of cold ones, the chinking of the bottles and zinc tickets, and, after eleven o’clock, the hammering, sawing, and tinkering of the carpenters and blacksmiths who came not unfrequently at that hour to set things generally to rights.’

Bridges’ outspoken criticism probably meant he would have found it difficult to find another post at the hospital. He had also worked as an assistant physician at the Hospital for Sick Children, Great Ormond Street and in the outpatient department at the Great Northern Hospital, Caledonian Road and, in 1879, he was made a full physician at the Great Northern. Here he was credited with preventing a serious smallpox outbreak, moving patients to Homerton Hospital, arranging for fumigation and for vaccination.

But just two years later, in June 1881, Bridges’ successful medical career came to an end. He caught severe pneumonia, and in November took a leave of absence from his post. He toured Italy, apparently in the hope of recuperating, but never returned to medicine. He formally retired from the Great Northern in June 1885 to write full-time.

In his Times obituary, the poet and historian, Sir Henry Newbolt said it was always Bridges intention ‘…to practice medicine until he was forty, when he would retire; the experience would give him knowledge of men for his work as a poet’, but his biographer Catherine Phillips thinks his motives were more complex. She suggests he may have made the initial positive, humanitarian decision to become a doctor after seeing his father and two brothers die from disease.

Speaking late in life about his medical career in a lecture at Ann Arbor, Michigan, Bridges gave no indication that medicine was a temporary choice. He gave up medicine he said because he realised he didn’t have the ‘necessary disposition’:

‘First of all the uncertainty of medical science and the possible complications in any difficult case gave me an intolerable anxiety – Then again since medicine was not nor could ever be my sole or chief interest in life, I could not face the perpetual industry which was needful in order to keep up with continuing and rapidly expanding knowledge – and this was also in my case the more difficult from the fact that I have no mechanical memory.’

His friend and neighbour, Edward Thompson, also noted Bridges’ extreme sensitivity, which may have made it difficult to practise medicine: ‘He was so sensitive to physical suffering (more sensitive, I think, than any other man I have met) that he never passed the place in the Broad where Latimer, Ridley, and Cranmer died without shuddering.’

In practical terms, the deaths of several of his siblings meant that by 1881 Bridges was receiving a greater share of his family’s private income and could afford to retire. By this stage he had also published several volumes of poetry and, encouraged by the positive critical response, may have believed he had a future as a poet.

Bridges left London, married Monica Waterhouse in 1884, and settled down, initially at Yattendon on the Berkshire Downs, and then at Boar’s Hill, near Oxford. Over the next almost five decades, he wrote several poetry collections, verse drama and criticism, and promoted the work of his Oxford contemporary and friend, Gerard Manley Hopkins. In 1913, after Rudyard Kipling refused the honour, Bridges was appointed as the poet laureate, a post he held until his death on 21 April 1930.

Despite making the decision to leave the profession at 37, Bridges clearly valued his experience as a doctor. He maintained a long correspondence with his friend, the physician Samuel Gee (1839 - 1911) (their letters are in the archive at the RCP), and in December 1894 encouraged Gee to keep telling him about his medical work:

‘I take enough interest in medicine to be glad to hear all that you care to tell me. It is always very interesting – especially when you tell me what you are doing. … I for one believe in the future of scientific medicine and can be enthusiastic about it.’