19th century editions of Thomas Browne’s innovative and formative work, Religio medici are now available online as part of the UK Medical Heritage Library (UK-MHL). Religio medici is a fascinating work, discussing some of the personal and professional concerns troubling Browne and the wider community of physicians in the 17th century. It's just one of hundreds of titles from the RCP library now available to read online.

Sir Thomas Browne (1605–1682) was born in St Michaels Parish, London. Browne excelled in education, and obtained a scholarship to Winchester school in 1616. He was awarded the degree of doctor of medicine in Leiden in 1633. After spending time travelling, Browne settled in Norwich and opened his own medical practice. Browne was a polymath, excelling not just in medicine but numerous others subjects. He wrote many literary works but it was one, Religio medici, published in 1642, which made the greatest impact.

As a young physician Browne was concerned with matters of faith and science. He used the Religio medici as a personal sounding board to explore his opinions on religious belief, Christian charity and his life as a physician. In 1642 the book was published anonymously, without Browne’s permission, by the printer Andrew Crooke. When Browne realised, he released his own edition in 1643.

The popularity of the Religio medici has been attributed to a number of factors. Society at the time was undergoing an upheaval with the outbreak of the English civil war, religious debate, and great scientific exploration and writing. Browne’s promotion of tolerance, and following one’s own conscious in matters of faith and science resonated with readers.  Browne’s style drew people in through his ‘rare humour, warm feeling and abundant charity’ in his pursuit of knowledge (Bennett 1962). Despite Religio medici’s inclusion on the Papal index of prohibited books, it became an international best-seller which was translated into dozens of different languages 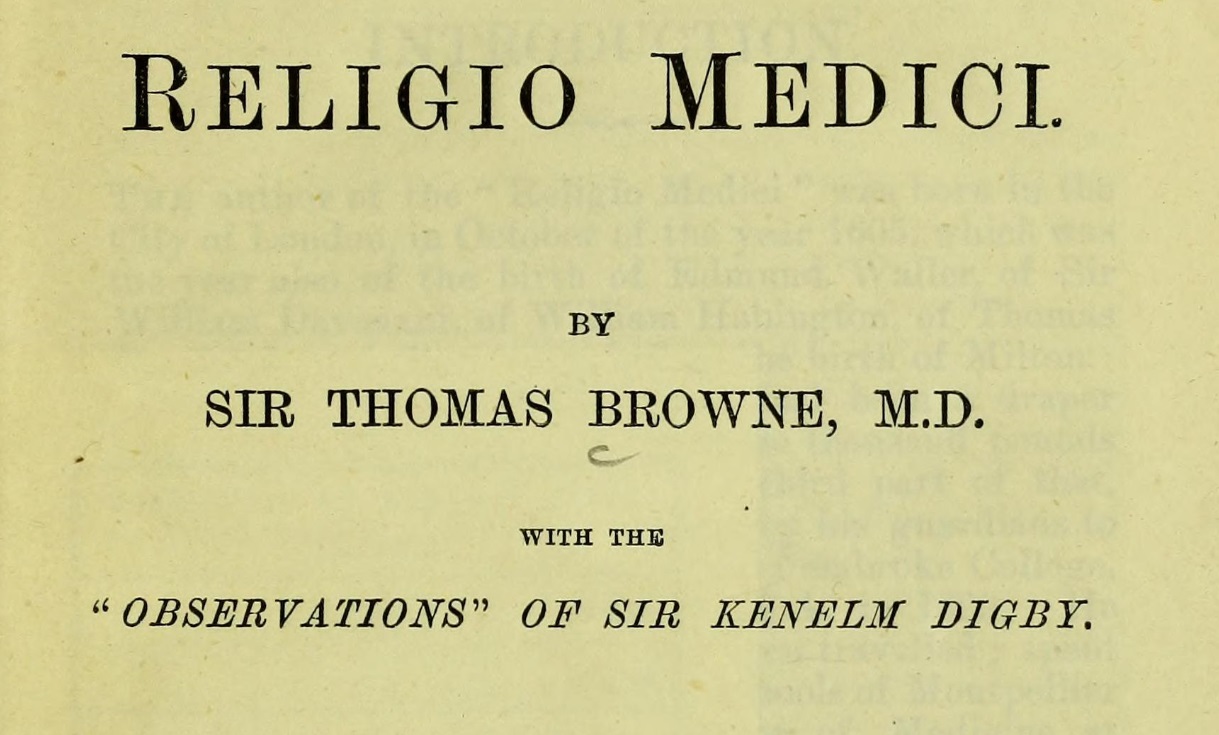 Religio medici with the Observations of Sir Kenelm Digby (1892), edited by Henry Morley

Some of the success of Relgio medici has been attributed to the observations made by natural philospher and courtier Sir Kenelm Digby (1603–1665). Digby read Religio medici while he was under house arrest and he formed and penned his observations all within 24 hours of receiving a copy. This edition, published by Cassel & Company, includes these observations with Browne’s approved 1643 text. Digby challenges many of Browne’s assumptions, logic and conclusions, showing either perspective on the debates of the time.

Henry Morley’s introduction summarises Browne’s life and career including some unsavoury aspects. He criticises Browne for his superstitions, and his involvement in a witch trial which resulted in the deaths of two women. This is a good edition for any readers looking for a questioning approach or a debate.

Read it online through the Internet Archive and the Wellcome Library.

This edition, previously owned by an RCP honorary fellow Bertrand Dawson, 1st Viscount Dawson of Penn, publishes three letters discussing the unauthorised first edition. The first letter, by Browne, details how it was an unauthorised edition and his plans for a copy which reflected his actual wishes. In the next letter Digby responds to criticism of his observations with praise of his own for the 1642 Religio medici. The final letter featured is from 'A.B.' criticising Digby for commenting on an unauthorised edition. For anyone looking to learn more about the history of the publication these letters are a must read.

Read it online through the Internet Archive and the Wellcome Library.

Rare books and pamphlets from the Royal College of Physicians began in be digitised in March 2015 for the UK Medical Heritage Library. There are now hundreds of books online, free to read and use. These items date from 1780 to 1914, and cover a wide range of scientific, medical, sociological and historic topics.

For more information on the Religio medici and Sir Thomas Browne the following references are recommended as they informed this post. All references are available through the RCP Library.