Skip to main content
The precious storehouse of the chirurgeon

In an age of anaesthesia and analgesia, when most of us encounter serious surgery under the cloak of unconsciousness, awaking in what is euphemistically termed ‘discomfort’, rather than experiencing howling agony the whole operation through, few items in the RCP collections draw more gasps or bring tears more easily to contemporary eyes than the contents of the Prujean chest. 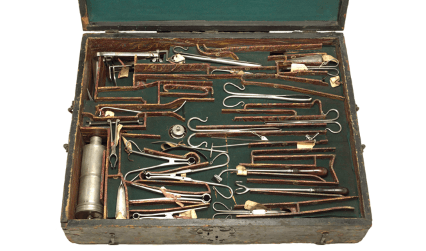 The chest, also known as a ‘chirurgeon’s storehouse’ contains one of the most remarkable collections of 17th century surgical implements anywhere in existence. It was presented to the RCP by Thomas Prujean (d.1662), son of then president Sir Francis Prujean (d.1666), and its donation marked Prujean junior’s admission as a candidate for membership.

Here are the tools with which a renaissance or enlightenment surgeon would have plied his – for the profession was officially exclusively male – trade. Probes and scoops for removing stones; heart-shaped equipage for gynaecological investigations; an innocent-looking circular saw for trepanation, the opening of holes in the human skull. All are present. 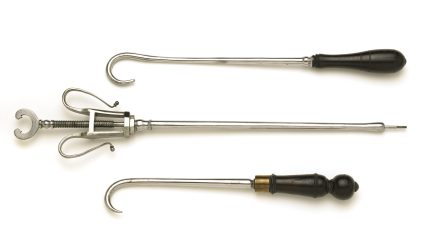 Three instruments in particular are worthy of special attention, especially when one considers the times in which the storehouse saw active service.

The Prujean Chest arrived in the college’s possession in 1653; the English civil war had ended just 2 years before, the Commonwealth was about to become Cromwell’s protectorate, rebellion in Scotland was continuing.

Bearing in mind the turbulent times, those apparatus concerned with the extraction of bullets may have seen more frequent and recent action than the 101 other devices the storehouse once held. Indeed the chest itself, which has proved sturdy enough to survive both the Great Fire of London and the Blitz, may have been built for the battlefield.

Though heavy and well-made, with intricately designed compartments lined with beautiful marbled paper, two drop handles on either side of the chirurgeon’s storehouse clearly indicate that it was designed to be carried, probably by a pair of men. Accounts from the time describe similar chests being mounted on carts and carried off to the scene of conflict where military surgeons performed emergency and rudimentary operations on the wounded.

In one of those ironies that illuminate history, Charles I, executed in 1649 at the peak of the civil war, had done much to advance military medicine, going as far as issuing an edict in 1628 for the impressment (effectively the conscription) of barbers and field surgeons.

Could the Prujean Chest have been part of the campaigns that ultimately led to King Charles' death?

Many other mysteries still surround this amazing object:

Such enigmas seem appropriate given that, to our modern minds, surgery itself is something of a mystery: undergone asleep, sedated or subdued.

Most of us may wince when we see the contents of the Prujean chest, but modern day surgeons and those who work inside operating theatres more often remark how little the machinery of their metier has changed down the centuries.