The RCP is in the process of digitising the photographs of deceased female fellows who have obituaries in Munk’s Roll. Among their number is musician and physician Margaret Macpherson.

There are thousands of photographs of deceased fellows in our archive as we encourage all fellows to submit a photograph when they are elected to the fellowship. Of these, just over 130 are of women thanks to the RCP’s determination to exclude women from fellowship until nearly the middle of the 20th century. One particularly striking photograph is that of Margaret Macpherson (1900–1993). The photograph is signed on the front by Sydney Weaver (active 1945–1970), whose work is also in the National Portrait Gallery. 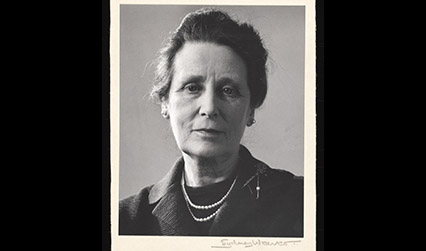 Macpherson’s Munk’s Roll entry is unusual and fascinating in that it talks about how her life was influenced by her friendship with AG Phear (1887–1959). Phear helped change the bye-law which admitted women as fellows of the RCP. As far back as 1907 Phear said that ‘every woman member ought to be able to look forward to being a fellow’. The decision to allow women to be elected to the fellowship was made in 1924 – the motion passed by 20 votes to 12 – but it took the RCP another decade to elect Helen Mackay (1891–1965) as the first female fellow. Macpherson became the ninth woman to be elected to the fellowship in 1945. Without the support of men such as Phear inside the institution, it was nearly impossible for women to progress very far, despite their brilliance.

Macpherson and Phear shared a love of keyboard music:

Margaret was often invited to musical evenings at his home in Weymouth Street and later she accompanied him and his wife on visits abroad, and to their unique Norwegian log cabin house in rural Surrey. Here they enjoyed possession of a clavichord especially made for Phear by the Dolmetsch family of Haslemere. A portrait of  G Phear playing the instrument was painted by Muriel Jackson; it hung in Margaret’s sitting room in Hampstead and passed to the College under the terms of her Will. 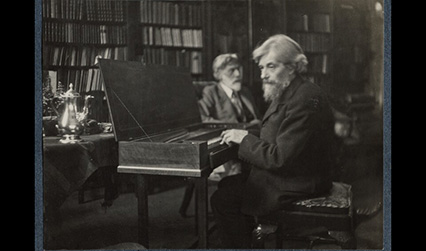 'Robert Bridges and Arnold Dolmetsch on the day of the presentation of the clavichord'. Vintage snapshot print by Lady Ottoline Morrell. October 1924. National Portrait Gallery.

The lifework of Arnold Dolmetsch (1858–1940) was the study of the performance of early music and the instruments on which to play it, such as the clavichord. With his family, he recreated historically authentic performances. Significant or representative examples of Dolmetsch’s work can be found in a collection of instruments at the Horniman Museum. The instrument in this painting bears many resemblances to a particularly popular model of clavichord produced at the suggestion of one of the finest clavichordists of the early 20th century, Violet Gordon Woodhouse, who was an early pupil of Dolmetsch. She also led a most colourful life (chronicled in the book Violet by Jessica Douglas-Home). 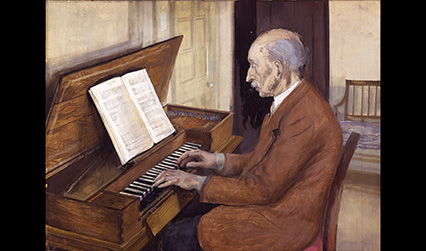 In the portrait by Muriel Jackson (1901–1978), the clavichord’s soundboard appears to be painted and these paintings were done by Mabel Dolmetsch (1874–1963), Arnold’s third wife, in egg tempera, which could have influenced Jackson’s use of tempera here. Jackson has kept the paint very thin so that that all the marks she has made are clearly visible. Jackson was a wood engraver as well as a painter and her portrait is on board rather than canvas. Having three boards joined together emphasises the wood in the portrait from the clavichord, the door, the chair Phear is sitting on and the seat in the background. Phear’s brown jacket echoes Jackson’s interest in the colour and texture of wood – the folds in the jacket mirror the grain of the wood of the clavichord.

Towards the end, the obituary mentions that Macpherson contracted ‘the Royal Free disease (ME)’ in 1955. 292 Royal Free Hospital staff in London, mostly nurses, physicians and administrators, were taken ill between 13 July and 24 November 1955. Before becoming the Royal Free, it was the London School of Medicine for Women – one of the few hospitals in which female physicians were allowed to work. At the time, 950 men worked there compared to 2,550 women and so women were more affected: 265 women compared to 27 men. Sufferers experienced both physical and psychological symptoms.

The Royal Free staff wrote about it in the British Medical Journal in 1957 and were in no doubt that they had experienced an outbreak of myalgic encephalomyelitis (inflammation of the brain accompanied by pain in the muscles), of which similar cases had been previously been recorded in other hospitals. However, when no cause could be found, in 1970, two male psychiatrists attributed it to mass hysteria, with disastrous effects for sufferers, like Margaret Macpherson, who experienced physical symptoms for decades afterwards. Dr Melvin Ramsay wrote in The saga of Royal Free disease that,

For the most part these unfortunate people were finally rejected as hopeless neurotics and there was at least one instance of a family breaking up when five doctors assured the husband that there was nothing wrong with his wife; she is now a chronic ME sufferer with permanent physical incapacity.

Geoff Watts considered these theories in New Scientist in 2002 and took the view that it was more likely to be hysteria than a mysterious infection. He wondered why the staff were so resistant to this label, describing female doctors who wrote letters in response as ‘huffers and puffers’. Watts wrote that ‘hysteria may be a diagnosis fit for schoolchildren and other ordinary folk, but not for medical staff’ completely ignoring the fact the word ‘hysteria’ originates from the Greek word for ‘uterus’, was once a common medical diagnosis for women and was essentially used to dismiss women’s experiences. Such a diagnosis reinforces the notion of the mentally weak woman and could be used as a tool to continue women’s oppression. As this happened at a time when women like Margaret Macpherson were battling to be accepted by the establishment, their wariness at a diagnosis of hysteria is understandable.