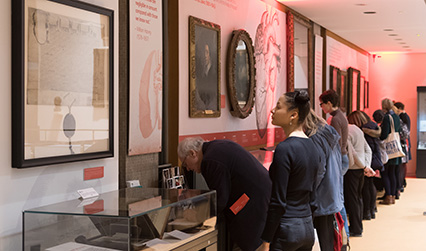 The RCP was founded in 1518, and the museum began its 500 year anniversary celebrations with an exhibition all about one of our most significant fellows.  From 19 January until 26 July 2018 we explore and celebrate the life, work and legacy of the ground-breaking anatomist William Harvey (1578–1657) in the exhibition ‘Ceaseless motion: William Harvey’s experiments in circulation’.

In this exhibition, we want to take you back to a particular time in the history of the RCP, to the year 1628.  This is the year that William Harvey published his work, De motu cordis.  The book represented a decade’s worth of painstaking research, all carried out by one man, Harvey.  The culmination of that research is what we now know today as blood circulation, the idea that the heart pumps blood through the body in a circuit of arteries and veins.  This idea challenged over one and a half millennia of accepted medical fact, and it would see Harvey defend his idea almost up until his death in 1657.

The exhibition was launched on Thursday 18 January with a public lecture and reception. The lecture, by Dr Andrew Cunningham of the University of Cambridge described ‘How William Harvey discovered the circulation of the blood and why he regretted it’. 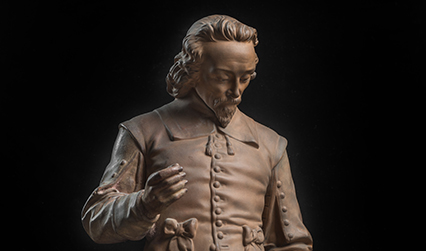 Many objects in the exhibition are being displayed for the first time together since the tercentenary of Harvey’s death in 1957.  Rare personal items like Harvey’s 1602 diploma from the University of Padua and his whalebone and silver anatomical demonstration rod are featured.  A 1628 edition of Harvey’s book De motu cordis sits alongside the 1653, first English edition, thought by some to be a truer reflection of Harvey’s original English research notes.  Loans from the Science Museum and British Cardiovascular Society also help us to tell Harvey’s story.

The exhibition also contains a selection of portraits and paintings of William Harvey, all with their own stories to tell.  This includes a loan from the National Portrait Gallery of a portrait of Harvey dating from around 1627, showing him as he would have appeared when De motu cordis was first published.  The portrait has had quite a journey, having been illegally sold to a private collector in the United States in 1960, before being returned to the National Portrait Gallery in 1977.

The exhibition is open 9am – 5pm, Monday to Friday, from 19 January until the 26 July 2018. The exhibition is open late until 8pm on the first Thursday of the month. No booking is  required, and the museum and exhibition are free to visit. A series of events for the Ceaseless motion exhibition and our 500th anniversary celebration will be taking place throughout the year.