'Harvey's disciples' is how esteemed cardiologist Evan Bedford (1898–1978) described his library of cardiological books, a collection of over 1,000 titles dating from the 16th century to the 1970s. The RCP library – which has traditionally been known as the Harveian Library – now houses this splendid collection.

Harvey may be regarded as the founder of modern cardiology … and it seems appropriate that the Harveian Library should contain a special section devoted to the heart and circulation, which I hope may be of service to Harvey’s disciples.

From the time of his training onwards Bedford collected books about the history and development of the specialty of cardiology. Bedford hunted books in far-flung locations including Cairo, Jerusalem, Beirut, Paris, Lyon, as well as the UK destinations of Aldershot, Salisbury, Liverpool, Leeds, and – naturally for any 20th century book collector – the second-hand bookshops of London’s Charing Cross Road.

Bedford chose books according their importance and usefulness to the history of the specialty, and disregarded their rarity, beauty, binding or any other features often prized by book collectors. 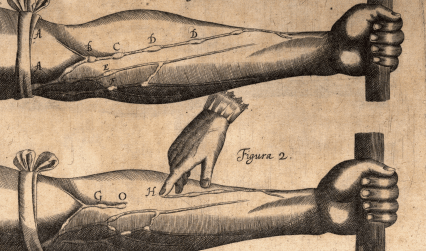 Illustration of experiments on the veins of the arm in Exercitatio anatomica de motu cordis et sanguinis in animalibus by William Harvey, published Frankfurt, 1628

Bedford arranged his books into thematic groups under headings such as the pulse, diagnosis, angina pectoris, rheumatic heart disease and many others. One whole section is devoted to the writings of RCP fellow William Harvey (1578–1657); Harvey’s famous study of the circulation of the blood, De motu cordis et sanguinis, takes pride of place among them.

Despite its small size – the first edition is only 72 pages long – Harvey’s De motu cordis is probably the most important cardiological book in the RCP library. Harvey wrote up his methods and findings after many years of research, during which he dissected the circulatory systems of many animals. In a series of lectures at the RCP beginning in 1616, he developed and refined his ideas in the face of a mixed reaction from other fellows of the college. The first edition of De motu cordis was finally published in 1628.

There are 22 copies of De motu cordis in Bedford’s collection, including translations from the original Latin into English, French, German, Spanish, Danish and Russian. Modern disciples of Harvey are welcome to consult these and any other books from the Evan Bedford collection, which are still kept according to Bedford’s arrangement in a dedicated section of the library.