William Harvey (1578–1657) was as a fellow of the Royal College of Physicians who encouraged his fellow Doctors to ‘search and study out the secrets of nature by way of experiment’.

His discovery of the systematic circulation of the blood, pumped around the body of all animals by the heart, is a legacy of scientific endeavour built upon the empirical pillars of observation and experimentation.  It would seem strange then, to associate Harvey with the arcane and superstitious world of magic and witchcraft.  Nevertheless, there was a time when William Harvey was drawn into the hysterical and tragic world of the witch-hunt.

The Pendle witch trials of 1634

There are two stories from Harvey’s life which involve witchcraft.  The first encounter took place during the Pendle witch trials of 1634.  Many instances of witchcraft had been reported in the Pendle area of Lancashire and between 1612 and 1634 many women were accused of being witches and committing crimes which included murder and cannibalism.

In the particular case Harvey was involved in, 17 women were found guilty of witchcraft, all on the testimony of an 11 year old boy named Edmund Robinson, who would later confess to having made up his entire story as a means to make some money.  Through the courts this case reached the notice of King Charles I.  Unlike his superstitious father, James I, Charles was a more sceptical man.  He ordered that four of the accused women were brought to London to be inspected by a selection of midwives and surgeons, under the guidance of His Majesty’s physician, William Harvey. 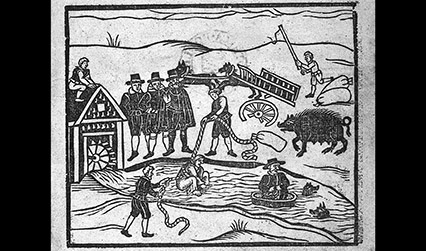 The four women were inspected for physical signs of witchcraft; either a mark of the devil, being an area of skin which had become callous and insensitive, or anything resembling a teat capable of suckling a witches animal familiar or a hellish imp.

Harvey, already sceptical of the existence of witchcraft, found no evidence of it upon the four women.  As a result these women were pardoned by the King.  Sadly, the women were then sent back to Lancaster Castle, where they were not permitted to leave until they paid for their room and board for the period they spent there on trial.  It is unlikely that any of the women could have afforded such a bill.

The toad of Newmarket

The second story occurred during a visit to Newmarket in 1632. William Harvey was accompanying King Charles I as his physician.  Whilst there, Harvey was told of a woman who lived alone on the edge of the town, who was purported to be a witch.  Harvey decided to investigate the claim and set off to visit the woman.

In order to gain her trust, Harvey claimed to be a wizard.  The women believed this, according to the story, because Harvey had ‘a very magical face’.  With his magical credentials established, the women produced a saucer of milk, opened a nearby drawer and began to make a noise like a toad. This noise attracted from the drawer a toad, which came over and began to drink from the saucer of milk.  The woman claimed that the toad was her ‘familiar’, a demon in animal form in service to the witch. 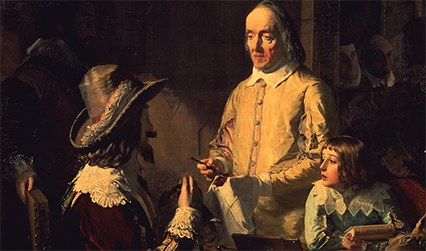 William Harvey Demonstrating to Charles I the Circulation of the Blood from the Heart of a Deer. Oil on canvas by Robert Hannah, 1848.

Harvey was determined to discover for himself if the toad was indeed a magical beast.  He gave the woman a shilling and asked her to go into the town to buy some ale for them to drink together.  Once she had left, Harvey immediately captured the tame toad and, as he had done so many times before at home, proceeded to slice open the poor animal to look at its insides.  On inspection, the animal was revealed to be nothing more than a toad, and Harvey was convinced that the woman was not a witch.  Naturally when the woman returned she was very upset to find her pet had been cut open, and ‘flew like a Tigris at his face’.  Harvey escaped the assault by claiming that he had been sent by the King to discover whether she was a witch, and arrest her if this turned out to be true.  This placated the distressed woman enough to allow Harvey to escape.

The tale of Dr Harvey and the frog may be a fanciful tale.  It appears in a letter written by an unidentified Justice of the Peace in Wiltshire to an unknown clergyman in Cambridgeshire in 1685.  It is possible that Harvey was in Newmarket with King Charles I during this period, and there is an account of a woman being hanged in nearby Cambridge for being a witch and keeping a frog as a familiar.  Nerveless, it may be prudent to take this particular toad tale with a pinch of salt.