If you open a book about 19th century dietary remedies it would be hard to find one that does not mention beef tea. It was a type of broth – made with beef and water – given to patients to drink if they were suffering from digestive problems, fever or weakness. People believed that the tea was nutritious and easy on the stomach, which would help patients to return to their former fortitude.

For those of you curious as to how this beef tea was made, two recipes appear in A universal formulary: containing the methods of preparing and administering officinal and other medicines. Ellis’ recipe required that one pound of lean beef be shredded and boiled with one quart of water for 20 minutes, with any scum that formed on the surface being removed. Once the tea was cold it could be strained and served. The recipe from AT Thomson recommended that a ‘good rump steak’ be shredded and sprinkled with salt and left in a hollow dish. Water should then be poured into the dish and left near a fire for 30 minutes. The mixture should then be transferred into a pan for a further 15 minutes. Water was then added to the mixture to make a drinkable tea. 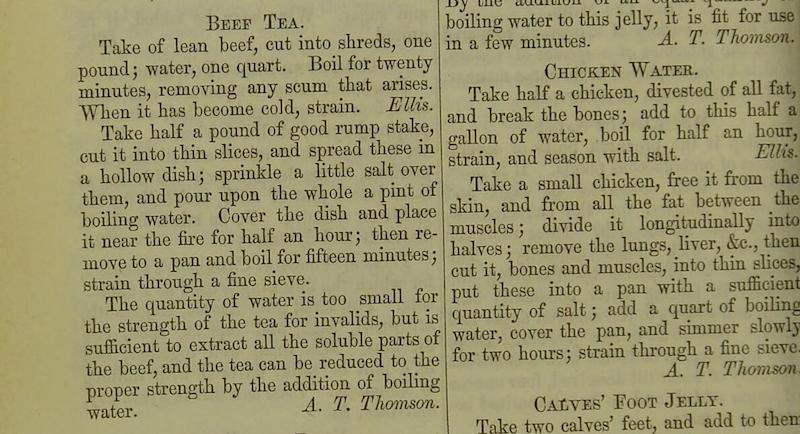 A universal formulary: containing the methods of preparing and administering officinal and other medicines. R. Eglesfeld Griffith, published London, 1851.

The Pharmacopoeia of the London Hospital is a guide created to aid staff and students of the hospital in ‘the art of prescribing’. It covers many aspects of hospital work including materia medica, how to take case notes on a ward, prescribing for children, poison antidotes and diets for patients. Beef tea featured heavily in meal plans; on being admitted to hospital, patients subsisted on a diet made up of 12 oz of bread, 2 pints of milk and 1 pint of beef tea. Children were fed the same diet but smaller quantities: they received just half a pint of beef tea. The beef was weighed after cooking to ensure that 8 oz of meat was included in each and every pint.

Despite beef tea’s popularity – it even appeared in classic novels such as What Katy did next – its efficacy was beginning to be questioned. This was important as it was reported in the Pall Mall gazette that 62,000 lbs of beef a year were being used to make the tea in one London hospital alone. T. Lauder Brunton, an RCP fellow, even went so far as to suggest that beef tea may potentially have been hazardous to patients, due to its high content of ‘muscular waste’. Florence Nightingale also doubted its reputation as a panacea, stating that it was a common error to believe that it was the most nutritious foodstuff that a patient could be given. However, this 19th century tea is reportedly making a comeback, though mostly for its flavour rather than for curing fevers.

For more digitised books from the RCP collection please visit the UK Medical Heritage Library via the Internet Archive or the Wellcome Library. The original copies of the books can be accessed in the RCP library reading room.