Many plagues affected Europe from the 14th to the 18th centuries, and could decimate populations. Physicians and other medical men invented imaginative concoctions in attempt – largely in vain – to treat and cure the disease. In the so-called ‘Great Plague’ of 1665, most physicians followed their wealthy patients in fleeing London, a city that was rife with plague. This largely left apothecaries to deal with infected people, and they adopted the costume of plague doctors across Europe. A 17th century poem describes an outfit that might be familiar from famous prints, topped with distinctive bird-like masks: 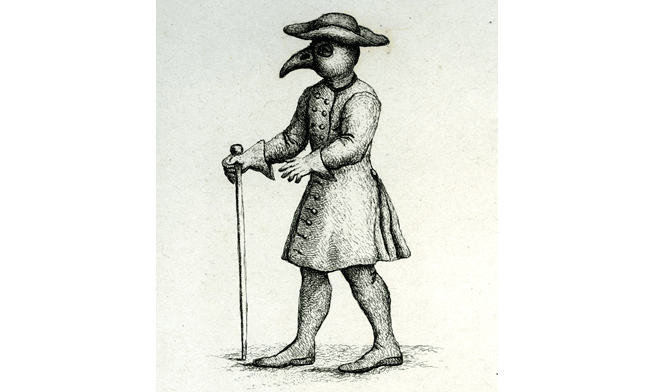 Print of Physician wearing mask at the time of the Plague, 18th century

‘Their hats and cloaks, of fashion new,

Are made of oilcloth, dark of hue,

Their caps with glasses are designed,

Their bills with antidotes all lined,

That foulsome air may do no harm’

So what was the thinking behind an outfit that might actually frighten the more delicate patient?

There was a longstanding belief that diseases travelled through the air. If you walked into a bad-smelling room the foulness was caused by the presence of disease – the air was polluted. This theory was called miasma theory.

Avoiding breathing in this disease-bearing stench was vital. How would you do this? Have nice smells to hand – or, rather, to nose! Thus the doctors wore beak-like masks. They could be stuffed with herbs and good smells to combat the disease in the air.

The rest of the costume was, ironically, more likely to be effective during the Great Plague of 1665. We know that the disease was spread so virulently by fleas, borne on rats (recent reports suggest that gerbils were the original carriers in Asia) that flourished in what was described as London’s ‘most beastly durtie streets’. The oiled and waxed, often floor-length coats worn by the doctors, along with hoods, hats and gloves, would have been effective barriers against the biting of fleas, as well as being easier to wipe clean.

The final element a plague doctor’s costume is given in the poem as:

‘The staff in hand must serve to show

Their noble trade where’er they go.’

For centuries a cane was a symbolic accoutrement for a physician – a well-crafted cane, with a fancy handle would give a patient confidence in the abilities of their doctor. If they could afford a good cane they were clearly successful. Such canes could also be a vessel for a pomander within the handle. A final practical use a doctor had for a cane was to keep a patient (and, during the plague, suspected plague carriers in the street) at a distance. They could prod or move clothing about from further than at arm’s length.

So, for all the bizarreness of the ‘beak doctor’ costume, it does make sense given the theories of the time. And yet today replicas are sold as Halloween fancy dress outfits!