Skip to main content
Banishing the ‘white plague’: innovations in the treatment of tuberculosis

Since 1518, the RCP has been collecting books, manuscripts, art and objects which reflect the diverse interests of its Members and Fellows. The RCP’s collections tell the story of life and death, health and disease, knowledge and superstition, fortune and catastrophe. For centuries, physicians were perceived to be at the top of the medical hierarchy. Their collections of silver, portraits and rare books reflect the prestige of the profession.

The captain of all these men of death…was the Consumption, for it was that that brought him down to the grave. (John Bunyan, 1680) 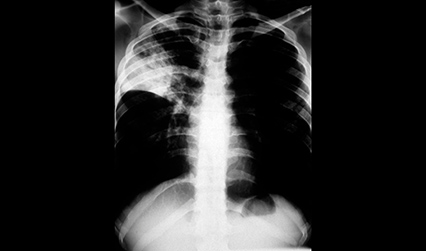 Chest x-ray of a young man with tuberculosis, Wellcome Collection.

In celebration of our anniversary year, the RCP Museum team has developed a new heritage trail called Curator’s Curiosities to allow us to share with the public some of the more curious stories behind our special collections. Alongside special purple signs around our Regent’s Park building, we are featuring monthly rotating displays of treasures from our stores which are rarely exhibited. For our first featured object, I have selected an artificial pneumothorax device, now on display in our Treasures Room until 15 February.

Tuberculosis (TB) is a bacterial infection caused by Myobacterium Tuberculosis, first identified in 1882 by Robert Koch (1843–1910). Known as ‘consumption’, ‘phthisis’ and the ‘white plague’, symptoms of tuberculosis include coughing up blood and flushed cheeks, characteristic of a constant low grade infection. TB has been described as a ‘romantic disease’, the gradual wasting from the infection being associated with famous romantic figures like Lord Byron (1788–1824). Indeed, some historians have suggested that the physical symptoms of TB influenced fashion in the 18th and 19th centuries 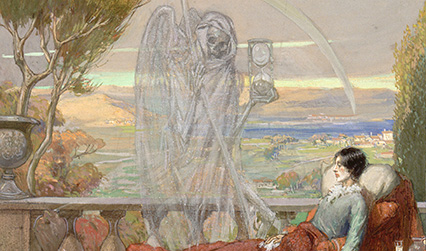 A sickly female invalid sits covered up on a balcony, c.1912. Wellcome Collection.

In terms of treatment, for most of history very little could be done to slow the progress of the white plague. Classical Greek and Roman texts suggested the use of remedies like the liver of a wolf boiled in wine. Drinking fresh milk and taking sea voyages also have a long history as a prescription for the disease. The belief that fresh air could ease lung complaints resulted in the sanatorium movement of the early 20th century – in which mountain air and sunshine were perceived to slow the progress of the disease.

However, surgical interventions were also found to be effective. In the late nineteenth century, Italian physician Carlo Forlanini (1847–1918) advocated the creation of an artificial pneumothorax in order to allow a lung to ‘rest’. The term ‘pneumothorax’ refers to the creation of an air bubble within the lung cavity which results in the collapse of a lung. This can happen as the result of disease or by accident and is considered a life-threatening medical emergency. However, Forlanini observed that TB patients experiencing such a collapse tended to survive longer – the ‘rest’ given to the affected lung allowing healing to occur to damaged tissues. From this observation, the ‘collapse principal’ was born. 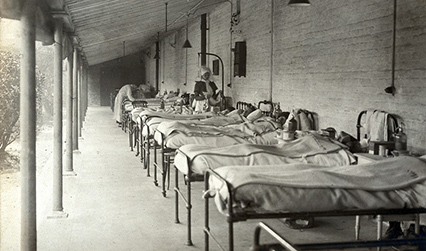 The item I have selected for this month is an artificial pneumothorax device used to collapse lungs. A large needle is inserted into the pleural (lung) cavity and air or nitrogen introduced to artificially stimulate a lung collapse. This object dates from the 1930s and was designed by Dr James Maxwell FRCP (1901–1962). Small and portable, this piece of equipment could be carried to treat a patient during an emergency. Fortunately devices like these were rendered obsolete by the introduction of antibiotics in the late 1940s.

I picked this object because it demonstrates the enormous changes to medical practice in the twentieth century. Antibiotics have allowed physicians to effectively treat diseases like TB, which would have proven fatal in previous centuries. However, even banishing the disease with (relatively) new developments like antibiotics has proven difficult. With the discovery of penicillin in 1928, there was a push to find a similar treatment for TB. However, white plague outwitted scientists and doctors for another 18 years. As the disease often lies latent or hidden in deep pulmonary cavities, it can be difficult for antibiotics to penetrate to the right areas to fight the bacterium. The first effective antibacterial drug streptomycin was introduced to treat the disease in the late 1940s. However, due to high instances of antibiotic resistance, a combined approach has been found to be the most effective. 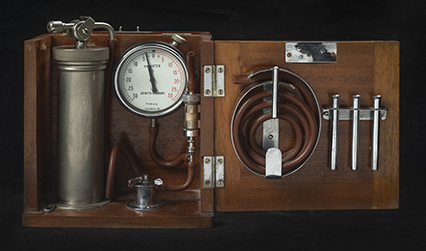 Contemporary treatments for the disease depend on whether the infection is active or latent, and whether it is resistant to certain drugs. NHS protocol for active pulmonary TB is a six-month course of isoniazid and rifampicin, with the addition of pyrazinamide and ethambutol for the first two months. Deaths from TB are rare if treatment is prompt and antibiotic courses are completed as directed. Antibiotic stewardship is an important issue for the RCP, with physicians working to ensure these drugs are used responsibly. Examples of the medications used to treat TB are displayed alongside the pneumothorax in the Treasures Room at the RCP until 15 February 2018.