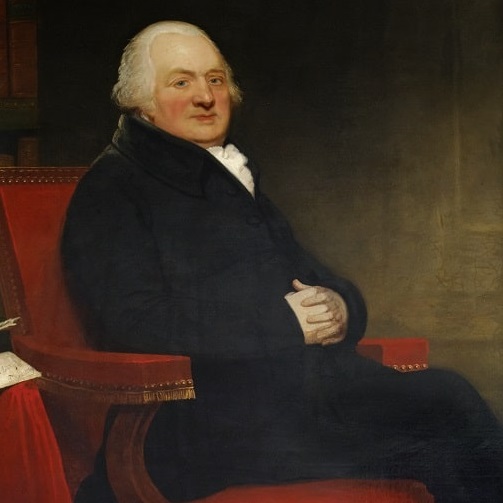 William Saunders, M.D.,was the son of Dr. James Saunders, an eminent physician at Banff, in the north of Scotland, and was born in that town in 1743. He received his medical education at Edinburgh, where he obtained the notice and friendship of Dr. Cullen. He took his degree of doctor of medicine in that university 28th October, 1765 (D.M.I. de Antimonio), and then settled in London. Dr. Saunders’s inaugural exercise gave ample proof of his attainments as a chemist, a circumstance which served probably to introduce him to Sir George Baker, who was then investigating the whole subject of Devonshire colic, and was assisted by Dr. Saunders in the chemical experiments necessary to the inquiry. He was admitted a Licentiate of the College of Physicians 26th June, 1769; and on the 6th May, 1770, was elected, chiefly through the influence of Sir George Baker, physician to Guy’s hospital.

Dr. Saunders’s attainments in science were considerable ; his industry and exertions indefatigable; and what he chiefly wanted to insure success was practical experience, which his hospital appointment now afforded him the opportunity of obtaining. Dr. Saunders’s progress to eminence was rapid; and in the course of a few years he was in the enjoyment of a very lucrative city business. He was early elected a fellow of the Royal and Antiquarian Societies; and on the nomination of his friend Sir George Baker, then the President, was admitted a Fellow of the College of Physicians, speciali gratiâ, 25th June, 1790. He served the office of Censor in 1791,1798, 1805, 1813; was Gulstonian lecturer in 1792 ; and Harveian orator in 1796. He was appointed physician extraordinary to the prince Regent in 1807; and died at Enfield (whither he had retired about three years previously) on the 29th May, 1817, aged seventy-three. His monument in Enfield church is thus inscribed:—
M. S.,
Gulielmi Saunders, M.D.,
Coll : Regal : Med : Lond : et Reg : Societ : Soc.;
viri probi, benefici, rerum sagacis,
artisq: suæ (ut testantur scripta) periti,
in hac ìllustranda felicissimi,
ejusq cultoribus strenue et constanter faventis.
Qui vixit Annos LXXIII. Ob : Maii XXIX, MDCCCXVII,
Hoc M. Patri optimo Liberi posuerunt.

Dr. Saunders’ portrait is at the College, to which it was presented by his son, Mr. J. J. Saunders. He was the author of—
Syllabus of a Course of Lectures on Chemistry and Pharmacy. 8vo. Lond. 1766.
A Letter to Dr. Baker on the Endemial Colic of Devonshire. 8vo. Lond. 1767.
A New and Easy Method of giving Mercury to those affected with the Venereal Disease. Translated from the Latin of J. J. Plenck. 8vo. Lond. 1768.
An Answer to Geach and Alcock on the Endemial Colic of Devonshire. 8vo. Lond. 1768.
Observationes de Antimonio ejusque Usu in Morbis Curandis. 12mo. Lond. 1773.
Observations and Experiments on the Power of the Mephitic Acid in dissolving Stones in the Bladder. 8vo. Lond. 1777.
Observations on the superior Efficacy of the Red Peruvian Bark in the Cure of Agues and other Fevers. 8vo. Lond. 1782.
A Treatise on the Structure, Œconomy and Diseases of the Liver, with an Inquiry into the proportions and component parts of the Bile and Biliary Concretions. 8vo. Lond. 1793.
A Treatise on the Chemical History and Medical Powers of some of the most celebrated Mineral Waters; with Practical Remarks on the Aqueous Regimen. 8vo. Lond. 1800.
Observations on the Hepatitis of India, and on the prevalent Use of Mercury in the Diseases of that Country, 12mo. Lond. 1809.