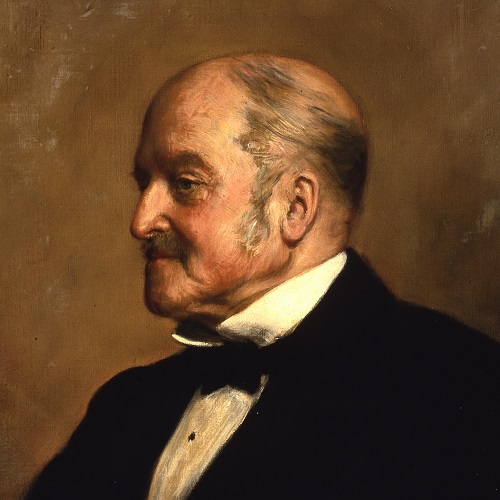 William Munk was born at Battle, Sussex, the eldest son of William Munk, an ironmonger, and his wife Jane Kenward. He was educated at University College, London, and at Leyden University where he obtained his doctorate of medicine in 1837. His first employment was as demonstrator of morbid anatomy at St. Thomas’s Hospital and was followed by honorary appointments at the Eastern, Tower Hamlets and Queen Adelaide’s Dispensaries, the Royal Infirmary for Asthma, Consumption and Diseases of the Chest, the Royal Hospital for Incurables, and at the Smallpox Hospital, to which he was physician from 1853 to 1893. He was recognised in his day as a leading authority on smallpox, and his plea for the increased use of narcotics and analgesics for the relief of pain in incurable diseases attracted considerable attention.

But it is as a historian that Munk is remembered by succeeding generations. He was appointed Harveian Librarian by the Royal College of Physicians in 1857, and his tenure of the office, which lasted till his death, proved him to be an ideal choice. It was in 1861 that there appeared, in two volumes, the first edition of his celebrated Roll of the Royal College of Physicians, providing a biographical record of Fellows and Licentiates of the College from its foundation by Linacre in 1518 to the end of the eighteenth century; a second edition, in three volumes, was brought out in 1878, carrying the record forward to the year 1825, in which the College moved from its old premises in Warwick Lane to its present site in Pall Mall East. Munk’s Roll, which was not originally intended for publication, lacks the detailed references to original sources and the methodical presentation of a modern historical work. Nevertheless it serves an essential purpose in providing historians and biographers with an invaluable and copious fund of information.

Another work by Munk to make a name for itself was his edition (1884) of The Gold-Headed Cane, originally written in 1827 by William Macmichael, Registrar of the Royal College of Physicians. This takes the form of the "memoirs" of a cane carried by Radcliffe, Mead, Askew, the Pitcairns and Baillie, and now preserved in the College. Munk, who was himself Senior Censor and, in 1889, Vice-President of the College, also wrote lives of two former Presidents, Sir Henry Halford (1895) and J. A. Paris (1857). He published a book on Euthanasia in 1887. Munk married in 1849 Emma, daughter of John Luke of Exeter, by whom he had two sons and three daughters. He died at Finsbury Square, London.