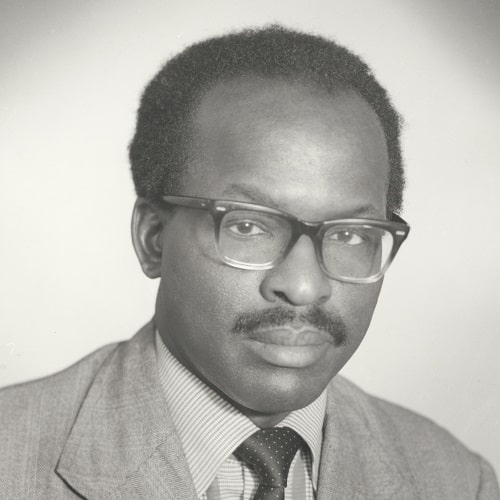 Thomas Ariba Ogada was a former dean of the faculty of medicine, University of Nairobi, and Kenyan ambassador to the United Nations, Geneva. He was the first indigenous Kenyan to be elected a Fellow of the College. He was born in Eldoret, the son of Mikail Kiyogo, chief of the Luo tribe. His maternal grandmother was a traditional midwife and was his inspiration. Tom Ogada attended Alliance High School in Kikuyu, Kenya, which bred great achievers in academia, the public service and politics in pre- and post-independent Kenya. He attended Makerere University Medical School, at that time the only medical school in the East African region.

After junior hospital appointments in Nairobi, his professional career continued as regional medical officer, followed by registrar training at Kenyatta National Hospital in Nairobi, and at Royal Northern Hospital in London. He served as lecturer, senior lecturer, and afterwards as professor of medicine and dean of the faculty of medicine at the University of Nairobi. He and his contemporaries, all graduates of Makerere University, were to have a major influence on the direction and development of medical services and medical education in their respective countries.

On relinquishing his post as dean of medicine, he was appointed director of medical services in the Ministry of Health of Kenya for a two year period. He was then appointed ambassador and permanent representative of Kenya at the United Nations in Geneva between 1989 and 1992. He represented Kenya at international agencies, including GATT, ILO, WHO, the International Red Cross, UNHCR, UN Disarmament Conference, and UN Human Rights Commission. He was president of the United Nations Trade and Development Board in the session of 1991 to 1992. On completion of his service in Geneva, he was appointed regional adviser to the World Health Organization at its office in Brazzaville. In 1998 he returned to Kenya. He remained active in an advisory capacity in the years that followed and was at the time of his death medical director of the Aga Khan Hospital in Nairobi.

Over the years he served on numerous medical and paramedical bodies in Kenya, but his greatest distinction was his election as president of the Association of Physicians of East, Central and Southern Africa, which enabled him between 1980 and 1984 to bring together in a single forum scattered groupings of physicians in post-colonial Africa. He was appointed Moran of the Burning Spear in recognition of his services to Kenya.

Outside medicine he had a particular interest in pre-colonial African history. He had a keen appreciation of western classical music, especially Bach, Beethoven and Berlioz, an interest that one daughter formally pursued in Europe as a professional musician. Not taking kindly to retirement, he went into farming, cultivating sugarcane, developing drip irrigation for horticulture and breeding pigs. He was killed in a head-on collision in a motor vehicle accident. He leaves a wife, Margaret, and three daughters and two sons, who have made their careers abroad.