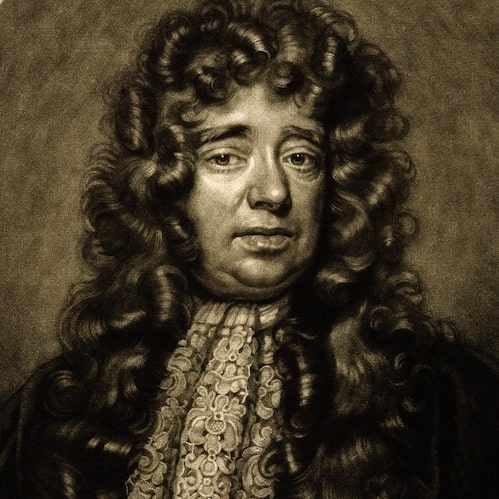 Sir William Petty, MD, was the son of Anthony Petty, a clothier, of Romsey, in Hampshire, where he was born 16th May, 1623. He was educated at the grammar-school of his native town, and whilst there acquired a competent knowledge of Greek, Latin, and French, as well as of those subjects in which he afterwards excelled, and upon which his reputation rests, namely, arithmetic, practical geometry, dialling, and the astronomical part of navigation. At the age of fifteen he was removed to the university of Caen, in Normandy, and, after some stay there, returned to England and entered the navy, but in what capacity is unknown. He did not long remain in that service, and, turning his attention to medicine, pursued its study successively at Leyden, Utrecht, Amsterdam, and Paris. He went to Oxford in 1648, and was constituted deputy or assistant to Dr Thomas Clayton, the professor of anatomy in that university. Soon afterwards, on a parliamentary recommendation, he was put into a fellowship of Brasenose college, and on the 7th March, 1649, was actually created doctor of medicine, by virtue of a dispensation from the delegates of the university, who, says Wood, received sufficient testimony of his rare qualities and gifts from Lieut-Col Kelsey, the deputy-governor of Oxford garrison.

Dr Petty was admitted a Candidate of the College of Physicians 25th June, 1650; and in the same year, being then resident at Oxford, was mainly instrumental in the recovery of Ann Green, who had been hanged in that city for the supposed murder of her child. On the 1st January, 1650-1, he succeeded his friend, Dr Clayton, as anatomy professor at Oxford; and on the 7th of the following month (February), was, by the interest of Captain John Graunt, elected professor of music in Gresham college. In 1652 he was appointed physician to the army in Ireland, and was physician to three successive viceroys - Lambert, Fleetwood, and Henry Cromwell. On the 14th July, 1655, he was elected a Fellow of the College, but being away from England, was not actually admitted until the 25th June, 1658. In January, 1658, he was elected a member for West Looe, in Cornwall, to serve in the parliament called by Richard Cromwell. On the dissolution of this parliament shortly afterwards, Dr Petty went again to Ireland, but returned to England at the Restoration, was presented to the King, and knighted by him 11th April, 1661.

Sir William Petty was one of the earliest members of the Royal Society, and was nominated on its first council. His studies and labours were directed to science and political economy rather than to physic, the practice of which he seems to have relinquished when he left Ireland shortly after the Restoration. His life affords but few incidents of a medical character, and may therefore be dismissed briefly in this volume. Those who desire particulars of his celebrated survey of Ireland, of his inventions, and numerous writings, will find a succinct account in Wood's Athenæ Oxon. vol. ii. p. 609. [P. For work by him see “English Topographer”.]

Sir William Petty died of gangrene of the foot supervening on gout, at his house in Piccadilly, the 16th December, 1687, aged 65, and was buried in the parish church of Romsey, close by his father and mother. [Eventually he is said in the Register of St James Piccadilly to have been buried there 31 Dec 1687. (1687 Dec 31, Sir William Petty, Reg of Burials) ?] Over his grave was laid a flat stone, with this short inscription, cut by an illiterate workman -
“Here layes Sir William Petty.”

”Sir William Petty,” says Wood, “was a person of an admirable inventive head, of a prodigious working wit, and of so great worth and learning that he was both fit for, and an honour to, the highest preferment!” His portrait by J Closterman was engraved by J Smith.

[British Library News, no.175 (Feb, 1993). Petty Papers Purchased. A generous grant of £700,000 from the National Heritage Memorial Fund has enabled the Library to purchase the papers of seventeenth century economist and virtuoso, Sir William Petty (1623-1687). Illustrating the breadth of Petty's work they include 103 large-scale maps from the Down Survey of Ireland, as well as treatises on economic, scientific, technical and religious subjects.

Little known today, Petty was an outstanding figure of 17th Century society when he was considered a visionary, advising both Cromwell and James II on affairs of state. The diarist Samuel Pepys described him as 'the most rational man that I ever heard speak'. Arms: Morison, Pantarum. Tab.12.Sec.4.]

Related pages
Reviving the physicians: the aftermath of the Great Fire of London
Browse Indexes Return to Results