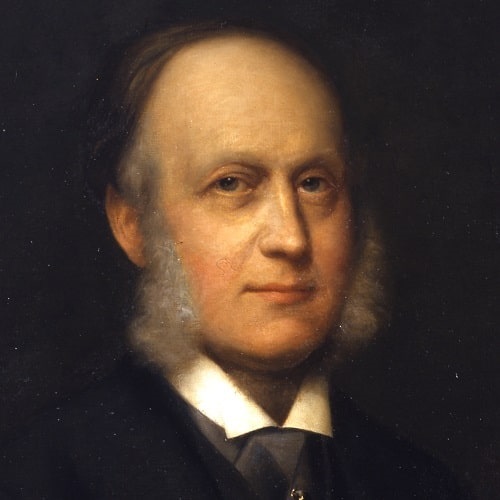 William Priestley was born at Morley Hall near Leeds, the eldest son of Joseph Priestley and his wife Mary, daughter of James Overend of Morley. His father was a nephew of Joseph Priestley, the discoverer of oxygen. He was educated at Leeds, King’s College, London, Paris and Edinburgh University. When he took his M.D. degree in 1853, he was awarded the Senate gold medal for his thesis on The Development of the Gravid Uterus. Two years earlier he had published a paper on Pelvic Cellulitis and the Fasciae of the Pelvis in the Female that had probably brought him to the attention of Sir James Young Simpson, and, after graduating, he became one of his assistants. Simpson was then at the height of his fame, and the two or three years that Priestley spent with him were invaluable to his later success. His marriage in 1856 to Eliza, daughter of Robert Chambers, of the celebrated publishing firm, gave him, in addition, the entree to the brilliant society of the Modern Athens, and not many young doctors could have arrived in London under more favourable auspices. In 1858, two years after his arrival, he was appointed lecturer on midwifery at the Middlesex Hospital and, in 1865, professor of midwifery at King’s College and physician-accoucheur to King’s College Hospital, in succession to Arthur Farre. But the reputation that he had brought with him from Scotland, Simpson’s known confidence in his ability, and his own personal charm of manner, rapidly brought him the largest maternity and gynaecological practice in London and, in 1872, at the early age of forty-three, he gave up his hospital appointments.

From the purely scientific point of view, this was no doubt a mistake. He had come to London as one of the pioneers of the infant science of gynaecology. But the claims of his practice were such that, as an investigator and man of research, he fell into the background. Indeed, in his later years, while personally respected and liked and immensely successful, he came to be regarded as somewhat reactionary and out-of-date in his own subject. But he was selected to be Physician-Accoucheur to Princess Alice of Hesse and Princess Christian of Schleswig-Holstein, and knighted in 1893. At the Royal College of Physicians he was Lumleian Lecturer in 1887 and a Censor. He represented the Universities of Edinburgh and St. Andrews in Parliament from 1896 to his death. Among his close friends were Louis Pasteur and Oliver Wendell Holmes and, at his house in Hertford Street, he and his wife dispensed proverbial hospitality. They were the parents of two sons and two daughters. He died at Warnham in Sussex.