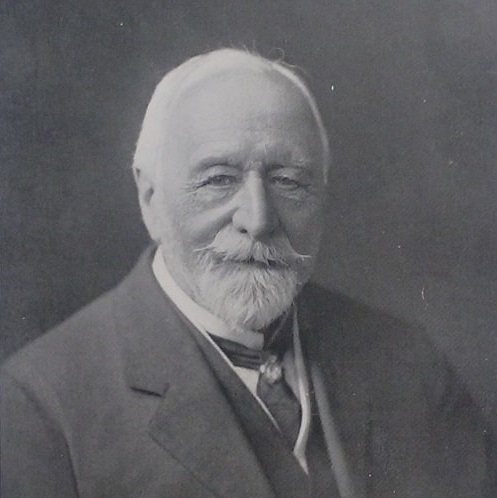 Clifford Allbutt was born at Dewsbury, the only son of Rev. Thomas Allbutt by his wife Marianne, daughter of Robert Wooler of Dewsbury. For his education, he went to St. Peter’s School, York, and Caius College, Cambridge, where he graduated as B.A. in 1859 with first-class honours in the natural sciences tripos. He did his clinical training at St. George’s Hospital, graduating as M.B. in 1860, and in Paris. He then settled as a consulting physician in Leeds, which remained his home for twenty-eight years. In 1864 he was appointed to the staffs of the Leeds General Infirmary, Dispensary and Fever Hospital, and lecturer on the practice of physic at the Yorkshire College, where two years later he began to lecture on anatomy as well. This period of his career was notable for his invention in 1866 of a short-stemmed clinical thermometer and for his original observations on the use of the ophthalmoscope, on syphilitic disease of the cerebral arteries and on the effects of strain on the heart.

In 1889, Allbutt, who had acquired an unrivalled reputation in the north, retired from consulting practice to become a commissioner in lunacy. After three years in London, however, a new phase of his career opened with his acceptance of the Regius chair of physic at Cambridge. There he soon exerted an influence that reached far beyond the bounds of the University. His most memorable achievement was his editorship of the famous System of Medicine, published in eight volumes between the years 1896 and 1899, to which he himself contributed fifteen articles; a second edition, in which H. D. Rolleston was associated with Allbutt, appeared subsequently in eleven volumes (1905-11). He was elected physician to Addenbrooke’s Hospital in 1900, and represented Cambridge on the General Medical Council from 1908 to 1918.

Allbutt was prominent in the affairs of the Royal College of Physicians. He delivered the Goulstonian Lectures in 1884, the Harveian Oration in 1900 and the FitzPatrick Lectures in 1909-10, was awarded the Moxon Medal in 1921, and became a Censor. He was an original member of the Medical Research Council, and at the age of eighty was elected president of the B.M.A.—an office which he occupied for a record number of years (1916-21). From the state he received the titles of K.C.B. in 1907 and privy councillor in 1920.

Allbutt’s energy was matched only by his versatility. A scientific physician who made valuable contributions to almost every branch of medicine, he was also a profound scholar versed in the history, classical and modern, of his art; not least among his writings were Greek Medicine in Rome and other Historical Essays (1921). A fluent and stylish writer himself, he deplored the slipshod English frequently to be found in scientific papers. His temperament was sanguine and equable, his bearing courtly and aristocratic. It is probable that George Eliot drew the character of Lydgate in Middlemarch from Allbutt whom she knew in his Yorkshire days. In his youth Allbutt had been a keen Alpine climber, and throughout his long and active life he preserved the best of health. He married in 1869 Susan, daughter of Thomas England, merchant, of Headingley, Leeds, but had no children. He died at Cambridge.