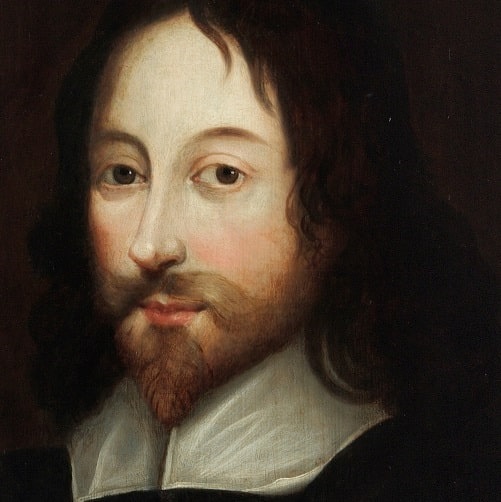 Sir Thomas Browne, MD –This learned physician and distinguished writer was descended from an ancient family settled at Upton in Cheshire. He was the son of Mr Thomas Browne, an eminent London merchant, by his wife Anne, the daughter of Paul Garraway of Sussex, and was born in the parish of St Michael, in Cheapside, 19th October, 1605. He was educated at Winchester, whence he was removed, in the beginning of 1623, to Oxford, and entered a fellow-commoner of Pembroke college, then called Broadgates hall. He proceeded AB 31st January, 1626-7; AM 11th June, 1629; and then, devoting himself to medicine, practised, as we are told by Wood, for some time in Oxfordshire. He next accompanied his step-father, Sir Thomas Dutton, to Ireland; subsequently he proceeded to France, studied for a time at Montpelier, and then, making the tour of Italy, and residing some time at Padua, on his way home visited Holland, and at Leyden took the degree of doctor of medicine in 1633.

He then settled as a physician at Shipden hall, near Halifax, and in his leisure hours began the work, “Religio Medici,” which has immortalised his name. In 1636, on the invitation of Sir Nicholas Bacon, and other influential persons in the county of Norfolk, and at the strong recommendation of his former tutor, Dr Thomas Lushington, rector of Burnham Westgate, he settled in Norwich, and on the 11th July following (1637), was incorporated at Oxford on his doctor's degree.

In 1641 he married Dorothy, the fourth daughter of Edward Mileham, esq, of Burlingham St Peter, by which union his connections in the county were greatly extended, his wife's family being numerous, and allied to several families of note in Norfolk. The publication of an unauthorised and very imperfect edition of his Religio Medici in 1642, and yet, more, the appearance of a corrected edition, published under his own auspices, at once brought him into public notice. From the first he acted on the principle which he was wont to impress on others, "secretum medicorum est judicium.”(1)

His reputation at Norwich rose to the highest pitch, and for many years he engrossed the whole of the professional confidence and emoluments of that city and neighbourhood. Editions of the “Religio Medici” appeared in rapid succession, and his fame, both at home and abroad, was fully maintained by the publication of other treatises, which, if not equal to his first work, were, nevertheless, highly creditable to him as a scholar, a critic, and a gentleman.

In December, 1664, he was elected an Honorary Fellow of the College of Physicians, as a person “virtute et literis ornatissimus,” and on the 28th September, 1671, he received the honour of knighthood from Charles II, then on his way through Norwich.

On the 10th December, 1840, a letter from Mr Robert Fitch was read at the Society of Antiquaries, giving an account of the discovery of the remains of Sir Thomas Browne, in the church of St Peter's Mancroft, together with an impression of the coffin-plate, which bears the following inscription:
Amplissimus Vir D'us THOMAS BROWNE, Miles, Medicinæ Dr Annos natus 77. Denatus 19 die Octobris anno D'nj 1682, hoc loculo indormiens. Corporis spagyrici pulvere plumbum in aurum convertit.

The coffin, which the inscription so quaintly describes as converted into gold, was found actually converted into carbonate of lead, a transition unusual for a period so comparatively short as 160 years. The bones were in good preservation, – the forehead low, the head long, the brain copious, and the hair profuse. The colour of the last corresponded with the portrait of Sir Thomas, which is preserved in the vestry room of the church.

“Of the brilliant qualities of the mind of Sir Thomas Browne, the reader may judge by consulting his works. For an account of his minute peculiarities we are indebted to the hand of friendship. Mr Whitefoot, who knew him intimately, says, his complexion and hair were like his name, brown, his stature moderate, his habit of body neither fat nor lean. In his clothing he had an aversion to all finery, and affected plainness both in the fashion and ornament. He kept himself always very warm, and thought it most safe so to do, though he never loaded himself with such a multitude of garments as Suetonius reports of Augustus, enough to clothe a good family. He was never seen to be transported with mirth or dejected with sadness. Always cheerful, but rarely merry; seldom heard to break a jest, and when he did he would be apt to blush at the levity of it; his gravity was natural, without affectation. Parsimonious in nothing but his time, whereof he made as much improvement with as little loss as any man in it; when he had any to spare from his practice, he was scarce patient of any diversion from his study, so impatient of sloth and idleness that he would say he could not do nothing. He understood most of the European languages, Latin and Greek critically, and a little Hebrew. He went to church constantly when he was not prevented by his practice, and never missed the sacrament of his parish, if he was in town (Norwich). He read the best English sermons he could hear of, and delighted not in controversies. He might have made good the old saying, ‘dat Galenus opes’ had he lived in a place that could have afforded it, but there was small scope at Norwich to acquire great professional gains." From the examination of his different works, all exhibiting very great talent, ingenuity, and acquirement, he will appear to have fully merited the distinction conferred upon him by the College of Physicians when they chose him an honorary fellow of their body; and to have abundantly deserved the character given of him on that occasion – virtute et literis ornatissimus – eminently embellished with literature and virtue. But it is not, continues Dr Macmichael,(2) on the praises of others, but on his own writings that he is to depend for the esteem of posterity, of which he will not easily be deprived, while learning shall have any reverence among men; for there is no science in which he does not discover some skill, and scarce any kind of knowledge, profane or sacred, abstruse or elegant, which he does not appear to have cultivated with success. However, if his style has great excellencies, it must be allowed that it is not without its faults. The pen of Johnson has characterized it as “vigorous, but rugged; learned, but pedantic; deep, but obscure,” with other pointed antitheses, in a manner not altogether free from the defects which he is himself reprehending. “He fell into an age,” continues Johnson, “in which our language began to lose the stability which it obtained in the time of Elizabeth; and was considered by every writer as a subject on which he might try his plastic skill by moulding it according to his own fancy. Milton, in consequence of this encroaching licence, began to introduce the Latin idiom; and Browne, though he gave less disturbance to our structures and phraseology, yet poured in a multitude of exotic words; many indeed useful and significant, which, if rejected, must be supplied by circumlocution, such as ‘commensality’ for the state of many living at the same table; but many superfluous, as ‘a paralogical’ for an unreasonable doubt; and some so obscure that they conceal his meaning rather than explain it, as ‘arthritical analogies’ for parts that serve some animals in place of joints. His style is indeed a tissue of many languages – a mixture of heterogeneous words, brought together from distant regions, with terms originally appropriated to one art and drawn by violence into the service of another. He must, however, be confessed to have augmented our philosophical diction; and in defence of his uncommon words and expressions, we must consider that he had uncommon sentiments, and was not content to express in many words that idea for which any language could supply a single term. But his innovations are sometimes pleasing and his temerities happy; he has many ‘verba ardentia’; forcible expressions, which he would never have found but by venturing to the utmost verge of propriety; and flights which would never have been reached but by one who had very little fear of the shame of falling.”(3)

The College of Physicians possesses a good portrait of this distinguished physician. Although I can find in the Annals no mention of the donor, we shall not, probably, be far from the truth, if we attribute it to Dr Edward Browne – Sir Thomas's son – a distinguished Fellow and President of the College.

Others of his writings were not published until after his death, viz:
Repertorium of the Antiquities of the Cathedral Church of Norwich.
An Account of some Urns, &c, found at Brampton in Norfolk, anno 1667.
Letters between Sir William Dugdale and Sir Thomas Browne of Norwich, MD.

Lastly, in 1716, there was published in 12mo –
Christian Morals, by Sir Thomas Browne, of Norwich, MD, printed from the original MSS by John Jeffery, DD, Archdeacon of Norwich.

Sir Thomas Browne's collected works have been several times published. The last and best edition (with a very complete biographical memoir) is that by Simon Wilkin, Esq, in 4 vols. 8vo. Lond 1836.