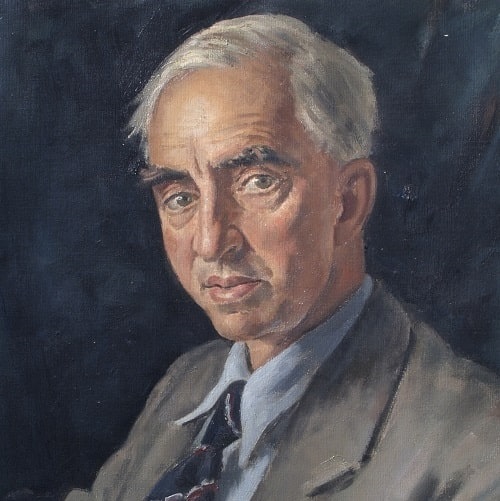 John Josias Conybeare was the son of F.C. Conybeare, a distinguished Oxford philologist. He was educated at Rugby School where among his school fellows were many who were to remain his friends throughout life, and not a few to attain distinction in his own profession of medicine. Even there, pugnacious and independent, he made his mark and, after he went up to New College, he expanded in the wider environment of Oxford, so that then, as later, "his name always set off a train of happy memories of enterprises and escapades, reputable or otherwise, but always colourful".

He read classics before turning to medicine and was very nearly qualified when war broke out in 1914. He immediately left for active service in the Oxfordshire and Buckinghamshire Light Infantry in which he was already commissioned as a territorial. He served in France on the Somme where his continued resourcefulness and humour gave strength to his battalion, and his continued courage was rewarded with the Military Cross. Eventually, the dearth of doctors in the Army caused the recall of senior medical students serving as combatants. Conybeare returned to England in 1916; he quickly gained his diplomas and rejoined the Army in Mesopotamia, this time in the Royal Army Medical Corps.

When the War was over, he returned to Guy’s Hospital and, after holding a postgraduate fellowship at the Johns Hopkins Hospital, Baltimore, he was appointed Warden of the College at Guy’s in 1923, the year before he obtained his Oxford doctorate. He was appointed assistant physician and Sub-Dean of the Medical School in 1925 and he was elected to the Fellowship of the Royal College of Physicians the following year. From the time of his appointment as Warden in 1923 until his death in 1967, his whole life, both professional and domestic - apart from further service in the War of 1939 - was spent within the precincts of the Hospital he served so well.

In 1939, he already held the post of civilian medical adviser to the Royal Air Force. He was commissioned as Group-Captain in September 1939. He served throughout the War, attaining the rank of Air-Vice Marshal and, at its conclusion, he was made a Knight of the British Empire. He became a Governor of Guy’s Hospital in 1946 and retired from the active staff as Senior Physician in 1955.

In 1928, there appeared the first edition of his Text-book of Medicine, which enjoyed such popularity that no fewer than thirteen editions appeared under his editorship. It was in this book, as in all his writing, that his precise thinking, with Latin clarity and brevity of style, made for a terse, readable text which was widely appreciated. In 1935 he wrote a Manual of Diabetes, with a supplement for the use of patients - a most valuable publication at the time. He wrote few papers.

Of striking and somewhat sardonic appearance with large features, his black eyebrows became more prominent as his hair whitened. Rather careless in dress, he was most often seen out-of-doors in the winter in raincoat and old school scarf; but, when he was going out to dine, his dress was meticulous and rigorous - black silk socks and patent shoes were essential and these, as far as is known, were always placed ready for the master, whatever the vicissitudes of post-war domesticity. His rich, rather nasal drawl, said to derive from his University days, was never modified; it was greatly valued by the Hospital Residents in their annual play, and vicariously used by all the many raconteurs who had another story to tell about him.

A radical, both by lineage and conviction, while remaining a believer in authority, he nevertheless was a supporter of the underdog. He could be a thorn in the flesh of the administrator; he would brook no delay in bringing to notice any case where he suspected an injustice. His dislike of administrative office did not prevent his gregarious and hospitable nature from seeking membership of many societies and groups where he was always welcome. No-one can have been a greater ‘diner out’ than ‘Cony’, as he was known, except to his old military friends who continued to call him "Conny". When not out to dine, it was rare that his house in the evenings was not subject to a constant coming and going of friends, young and old. He generated many circles round himself; one evening there would be his RAF friends, on another his old contemporaries from the earlier war and from Oxford, on another his juniors. Each group, with its separate relationships and sentiments, was steered into a separate compartment.

He had a multitude of interests. The possession of a steam car in 1913 brought him into close contact with William Morris who then kept a garage in Oxford; this long acquaintanceship must have deeply influenced Lord Nuffield in directing many of his benefactions towards medicine, and in particular towards Guy’s Hospital.

Music, painting and ecclesiastical architecture all found a place and enlivened Conybeare’s many travels abroad. For, although of a somewhat chauvinistic turn of mind, he enjoyed the air and the cuisine of foreign countries. Long luxurious cruises during the inter-war years - when Conybeare as well as any enjoyed the delights of those halcyon days - in more austere times gave place to modest visits to Italy and to France.

Strong and pertinacious, his judgements of people were sometimes imperfect; once having decided a man was not to his taste, nothing could convince him of his error. His opinion might turn upon some chance event, some real or imagined lack of quality, but on the other hand he could be understanding and patient with weaker vessels. He disliked pomp, fuss and hypocrisy; in his later years, he was modest in his own expenditure and eschewed the taxi for the omnibus. A good part of his resources was devoted in secret to the support of those he deemed in need. Only his intimate friends knew the extent of his generosity, which extended not only to the provision of money and the payment of fees, but also to regular visits to many bereaved families. It was typical that he should have left what remained of his fortune to Rugby School so that the masters might enjoy the advantage of foreign study and travel in the holidays - a project he had initiated and had supported for some years before he died.

His professional life was throughout a distinguished one. At his best by the bedside, teaching straight-forward medicine and tolerating not at all the careless and slipshod student, his shrewd clinical judgement was rarely at fault. Until 1939, he had a wide consulting practice and he was also chief medical officer to a number of insurance companies. His opinion was constantly sought by doctors for themselves and for their families - the accolade of the profession.

At his hospital he was a legend while he was alive; wherever a few Guy’s men were gathered together, it was rare for his name not to be mentioned and the latest news of him sought. In his later years, when his health became indifferent, he did not modify his way of life in any way and he never admitted that he suffered pain or discomfort. He died suddenly, beside Guy’s, as he would have wished.