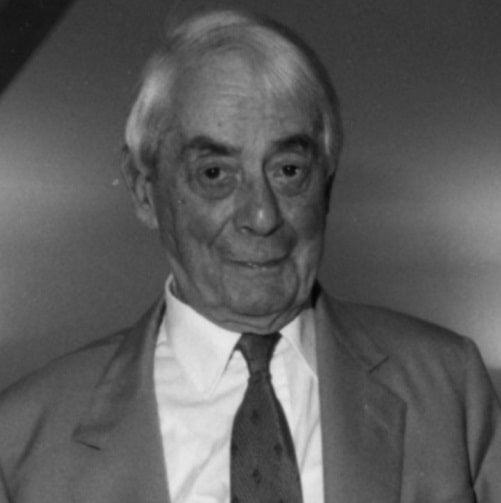 Denys Lasdun studied at the Architectural Association where he became a firm adherent of the modern movement. Le Corbusier’s Vers une Architecture was to remain an influence on him all his life. In 1937 Lasdun worked for Wells Coates (1895-1958), and then with Tecton – the progressive architectural group formed by Berthold Lubetkin (1901-1990), designer of the Highpoint flats in Highgate and the London Zoo penguin pool.

Lasdun established his independent reputation after the war with a delightful school in Paddington, innovative council housing in Bethnal Green, and a graceful block of flats in St James’s Place, overlooking Green Park. At Green Park and at the Royal College of Physicians he made unequivocally modern buildings harmonise with classical neighbours by careful choice of materials and an underlying sympathy for the proportions and principles of classicism.

In 1959 Lasdun established Denys Lasdun & Partners, winning numerous prestigious commissions including the new University of East Anglia in Norwich, and the National Theatre on London’s South Bank. The latter was to become the defining building of Lasdun’s career. From the start the National Theatre has divided opinion between those who dislike its grey colour and its sober architecture, and those who love the wood-marks in its concrete and the dramatic space of its foyers.

Lasdun defended many aspects of the modern movement when both its beliefs and aesthetics were facing severe criticism. His own massive and uncompromising concrete and glass structures often made him the object of attacks, the Prince of Wales famously declaring in 1988 that the National Theatre was ‘a clever way of building a nuclear power station in the middle of London without anyone objecting’.

Lasdun did receive much support and recognition; knighted in 1976 and made a member of the Order of the Companions of Honour in 1995, he was awarded the RIBA Royal Gold Medal for architecture in 1977. Elected to the Royal Academy in 1991, in 1997 the Academy honoured him with a retrospective exhibition and its architect members have rallied to defend Lasdun’s monumental legacy.

Related pages
Spotlight on modernist architecture: Denys Lasdun’s legacy
Happy Birthday Sir Denys Lasdun!
How do you exhibit a building?
The anatomy of a building: Denys Lasdun and the Royal College of Physicians
‘Respect the geometry’
Stories behind the iconic RCP building in Regent’s Park
The birth of a building
Browse Indexes Return to Results