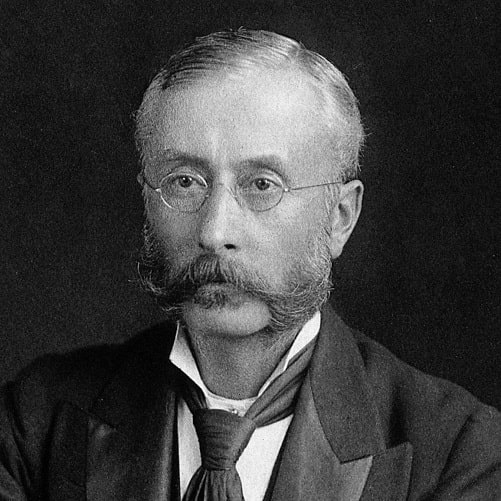 David Ferrier was born at Woodside, near Aberdeen, the second son of David Ferrier, by his wife Hannah, daughter of Alexander Bell of Brechin. He was educated at Aberdeen Grammar School and University and took first-class honours in classics and philosophy when he graduated as M.A. in 1863. In 1864 he went to Heidelberg to study psychology and a year later entered Edinburgh University as a medical student. On graduating as M.B. in 1868, he engaged in general practice at Bury St. Edmunds for two years. Realising that this was not his metier, he accepted the appointment of lecturer on physiology at the Middlesex Hospital in 1870 and, after a year there, became demonstrator of physiology at King’s College. In 1872 he succeeded to the chair of forensic medicine at King’s and in 1874 was elected assistant physician to King’s College Hospital. He became physician with charge of outpatients in 1881 and full physician in 1890, a year after being appointed to the chair of neuropathology specially created for him. Ferrier also held an early appointment at the West London Hospital and after 1880 was one of a distinguished staff of physicians at the National Hospital for the Paralysed and Epileptic.

It was in 1873 that he began at King’s his researches on the brain which, confirming and extending the work of Fritsch and Hitzig and providing experimental confirmation of many of Hughlings Jackson’s theories, soon established him as the pioneer of cerebral localisation in England. His book The Functions of the Brain, published in 1876, was immediately accepted as opening up a new continent of research, although at this period he was bitterly attacked on account of his experiments on animals. His was the hand that first made a map of the cerebral cortex from what was largely a terra incognita, and he lived to be the doyen of English neurology.

Among the honours received by Ferrier were the Marshall Hall prize (1883) and the Royal Medal (1890) of the Royal Society and the Cameron prize (1891) of Edinburgh University. At the Royal College of Physicians, he was Goulstonian Lecturer in 1878, Baly Medallist in 1887, Croonian Lecturer in 1890, Harveian Orator in 1902, Lumleian Lecturer in 1906, Senior Censor in 1907, and Moxon Medallist in 1912. He was knighted in 1911. Ferrier was a lover of classical literature, art, and the sea, and remained alert and dapper to the end. He married in 1874 Constance, daughter of Albert Crakell Waterlow of London and had one son and one daughter. He died in Kensington.