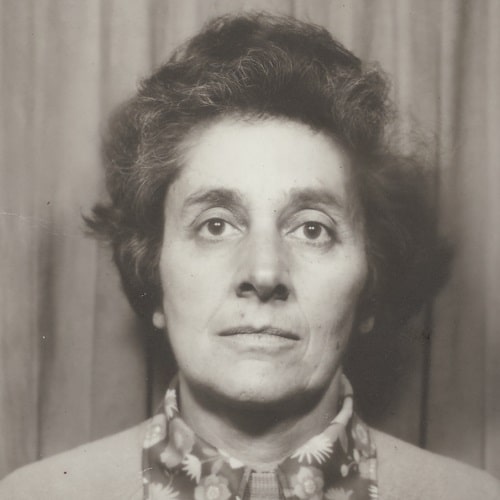 Shortly before she died Ruth Harris’s name had been included in the recommendations of Council to Comitia for election to Fellowship. She was born at Stoke Newington, London, where her father Judah Harris was a shoe factor; her mother, Annie, was the daughter of Soloman Swerdloff, a cabinet maker.

She was educated at the Parliament Hill Grammar School and the Royal Free Hospital Medical School, where she received several undergraduate awards, qualifying in 1950. Her first post was that of obstetric house surgeon at the Royal Free Hospital, and thereafter she held four resident posts in paediatrics - mainly in London hospitals. For the next two years she was a research assistant in the chemical pathology department at the Hospital for Sick Children, Great Ormond Street, where, under the guidance of WW Payne (q.v.), she studied the metabolic effects of treating fibrocystic disease with pancreatin, and laboratory guides to the prognosis of acute nephritis.

The foundation of her life’s work in electroencephalography was laid in the neonatal department of the Institute of Child Health at Hammersmith Hospital where, following a course of instruction at Queen Square, she worked from 1956 until 1960. She was the first British physician to study the EEG in healthy and sick newborn babies. In that research she displayed the technical expertness, the keen powers of observation and the scrupulously accurate reporting which characterized all her future work in electroencephalography -a subject that has not lacked its over-imaginative exponents.

From 1960 to 1967 she underwent her apprenticeship proper in electroneurophysiology under the guidance of G Pampiglione, as senior registrar at Great Ormond Street and for a further year at the National Hospital, Queen Square. In 1968 she was appointed consultant neurophysiologist to the Bethlem Royal Hospital and the Maudsley Hospital, and (from 1973) to the Queen Mary’s Hospital for Children, Carshalton. In both hospitals she enthusiastically developed the clinical neurophysiology departments, greatly increasing their versatility and usefulness.

She still held these appointments at the time of her death, when she had built up a solid reputation as one of the very few experts in this country on the electroencephalogram in infancy, childhood and adolescence. At the Maudsley Hospital she was reponsible for all the electromyography and peripheral neuro-physiological work in adults as well as in children.

Ruth Harris published, alone or in collaboration, upwards of forty papers and chapters in books covering many aspects of the electroneurophysiology of infancy and childhood. It would be untrue to say that most of her work displayed great originality; instead it was painstaking, thorough and above all accurate; work that had to be done and was done supremely well.

She wrote extensively on the EEG in mental retardation, degenerative disease of the CNS and psychosis in children, showing in the latter that the EEG might sometimes reveal unsuspected epileptic phenomena, and that these children improved with appropriate anticonvulsant therapy. The subject of the thesis for which she was awarded the London MD in 1977 was that of the EEG in children with infantile spasms treated with ACTH. In the same year she was elected MRCP under Bye-law 117.

She wrote a number of thoughtful and admirably critical review articles. She was a frequent contributor at meetings of the EEG Society and was well known and respected internationally.

In 1952 she married Sidney Ernest French who for many years was Secretary of the Surrey Branch of the Communist Party of Great Britain until, a few years before his death in 1979, he resigned to form the New Communist Party, the philosophy of which was to the left of the parent body. Husband and wife were a devoted couple and Ruth Harris, whose father was also a communist, shared the ideals that informed their political views. However, she had taken no active part in politics for many years. They had one daughter and one son.

Although most of Ruth Harris’s working life had been devoted to electroneurophysiology, she had all the qualities of a first-rate clinician — a profound knowledge of clinical paediatrics, astute judgement and splendid common sense. As a young woman she displayed admirable presence of mind in the case of Sisera’s syndrome when acting as doctor to a boys’ summer camp. The victim had fallen on the sharp end of a large metal tent peg and driven it into his skull up to the hilt. The case was thus named and successfully treated by Antony Jefferson, neurosurgeon in Sheffield.

Ruth Harris was the anonymous author of an article entitled ‘On Having Cancer’ (Lancet, March 31st, 1979, pp.715-716). This is worthwhile reading both as an account of the horrors — and the at least temporary efficacy — of chemotherapy for disseminated malignant disease, and also because it conveys a flavour of the woman herself — her courage, her modesty, her honesty, her consideration for the feelings of others and her robust sense of humour.

[FRCP nomination withdrawn at her death, but included in Munk’s Roll by consent of the College Officers.]