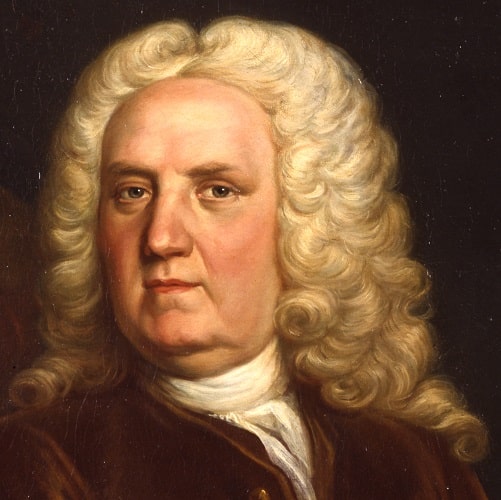 Richard Mead, M.D., was the son of the Rev. Matthew Mead, a celebrated nonconformist divine, and was born at Stepney 11th August, 1673. He received his early education at home, under his father and a private tutor, Mr. John Nesbitt, who resided in the house. In 1688 he was placed under the care of Mr. Thomas Singleton, and in the following year under the celebrated Grævius, at Utrecht. He applied himself to the study of the classics and philosophy, and in 1692 removed to Leyden, where he remained three years, devoting himself with great assiduity to the study of physic. There he was contemporary with Boerhaave, then a student like himself, and with that great and good man Dr. Mead ever afterwards maintained a frequent and friendly intercourse. In the early part of 1695, having completed the usual course of study at Leyden, he, in company with his brother Samuel, Mr. David Polhill, and Dr. Pellett, travelled into Italy, and, whilst at Florence, he had the good fortune to discover the Mensa Isaica, which for many years had been given over as lost. He took the degree of doctor of philosophy and physic at Padua, 16th August, 1695, and then visited Naples and Rome.

On his return to England, about Midsummer,1696, he settled at Stepney, in the house where he was born, and for the few years that he continued there did a considerable amount of business in that neighbourhood. His father was a man greatly respected, and possessed much local influence, especially among the nonconformists, a numerous and respectable body in Stepney. He availed himself of every possible opportunity to advance his son, and some curious anecdotes are recorded of his efforts in this direction, even from the pulpit. In 1702 Dr. Mead came before the public as an author, by the publication of his "Mechanical Account of Poisons." This work was received with great applause, and at once established his reputation. He was elected a fellow of the Royal Society in 1703, one of the council in 1706, and vice-president in 1707. On the 5th May, 1703, he was elected physician to St. Thomas’s hospital, when he removed from Stepney to Crutched Friars; at a subsequent period he removed to Austin Friars, and about that time was appointed reader of anatomy to the company of barber surgeons. On the 4th December, 1707, the university of Oxford conferred upon him the degree of doctor of medicine. Hitherto, for reasons which have never been explained, he had not presented himself for examination before the College of Physicians: now, however, being possessed of an English university degree, he appeared before the Censor’s board, underwent the usual examinations, and was admitted a Candidate 25th June, 1708. He was admitted a Fellow 9th April, 1716; was Censor in 1716, 1719, 1724; Harveian Orator in 1723; Elect 5th November, 1735; and in 1744 was chosen President by the Elects, but he desired to be excused, and was so. He was Consiliarius in 1745, 1747, 1748. On the 9th April, 1750, he resigned his office of Elect. On the 7th May, 1745, he was elected an Honorary Fellow of the College of Physicians of Edinburgh.

On the death of Dr. Radcliffe, in 1714, Mead removed from Austin Friars to his house in Bloomsbury-square, and, succeeding to much of that physician’s practice, resigned his office at St. Thomas’s hospital. At a subsequent period (1722), when at the zenith of his reputation, he removed thence to Great Ormond-street. On the accession of George II, Dr. Mead was appointed physician in ordinary to the King, an office he continued to hold to his death.

"After the most brilliant career of professional and literary reputation, of personal honour, of wealth, and of notoriety, which ever fell in combination to the lot of any medical man, in any age or country, Mead took to the bed, from which he was to rise no more, on the 11th of February, and expired on the 16th of the same month, 1754. His death was unaccompanied by any visible signs of pain. In practice he had been absolutely without a rival; his average receipts had during several years amounted to between six and seven thousand pounds, an enormous sum in relation to the value of money at that period. So great was the anxiety to obtain his opinion, that he daily repaired to a coffeehouse in the City, and to another at the West End of the metropolis, to inspect written or to receive oral statements from the apothecaries, and to deliver his decision. His charity and his hospitality were unbounded; the epithet "princely" has often been applied to him on this head; but he has truly left an example which men of all ranks may be proud to imitate according to their means.

These qualities in Mead were not the result of the accident which exalts or limits our means, but were the spontaneous expression of his heart. His gratuitous advice was ever open, not merely to the indigent, but also to the clergy, and to all men of learning ; and he devoted his emoluments to the patronage of literature and of the fine arts in a manner that requires a more distinct mention. Radcliffe was a worthy predecessor of Mead in the magnificent use which he made of his fortune. We may safely challenge any country to produce two individuals of the same profession, and flourishing at the same period, who have with equal generosity applied their revenue to the promotion of science and of erudition, and to the relief of misery. But Mead excelled all the nobility of his age and country in the encouragement which he afforded to the fine arts, and to the study of antiquities. Considered merely in the light of a patron, he would remain, perhaps, the most conspicuous example of that character which biography has celebrated; but when to his exertions in that difficult and often thankless career, are added the most eminent medical practice of his time, consummate acquirements and literary labours important to the healing art, we shall find it difficult to select his equal among the annals of any period. Those excellent traits do not, however, complete his portrait; a noble frankness, suavity of manners, moderation in the estimate of his own merit, and a cordial acknowledgment of the deserts of his cotemporaries; liberality, not merely of purse, but also of sentiment, must be drawn in order to finish the likeness.

"Mead possessed in an extreme degree the taste for collecting; but his books, his statues, his medals, were not at all confined to ornament a secluded apartment, or to amuse only his own leisure—the humble student, the unrecommended foreigner, the poor inquirer derived almost as much enjoyment from these unburied treasures as their ingenious owner. In his spacious mansion in Great Ormond-street he had built a gallery, which only his opulence and taste could have filled. The printed catalogue of his library contains 6,592 separate numbers ; the most rare and ancient works were to be found there; Oriental, Greek, and Latin MSS. Formed no inconsiderable part. His collection of statues, coins, gems, prints, and drawings will probably remain for ever unrivalled amongst private amateurs. His pictures alone were sold at his death for 3,4OOɭ. Ingenious men sought in his house the best aid for their undertakings, and in the owner their most enlightened as well as most liberal patron. He constantly kept in his pay several scholars and artists, who laboured at his expense for the benefit of the public. His correspondence extended to all the principal literati of Europe. They consulted him and sent him curious presents, but in such acts he was more frequently the creditor than the debtor. The king of Naples sent to request of him a complete collection of his treatises, and in return gave him the great work, which he was then encouraging, on the antiquities of Herculaneum; a compliment not the less flattering from an accompanying invitation to Mead to visit him at his palace. At his table might be seen the most eminent men of the age, both natives and foreigners, and he was often the only individual present who was acquainted with all their different languages. The good of mankind, and the honour of his country, were two of his ruling principles. He persuaded the wealthy citizen Guy to bequeath his fortune towards the foundation of the noble hospital which has honourably consecrated his name.

"Mead was twice married. By his first wife, Ruth Marsh, he had eight children. One of his daughters was married to Sir Edward Wilmot, bart., an eminent physician, who enjoyed the particular favour of George the second and third; another became the wife of Dr. Frank Nicholls, who was the most distinguished anatomical teacher of his time, and was the inventor of corroded anatomical preparations. Mead’s second wife was Anne, the daughter of Sir Rowland Alston, bart.

"Although his receipts were so considerable, and although two large fortunes were bequeathed to him, his benevolence, public spirit, and splendid mode of living prevented him from leaving great wealth to his family. The physician who was the Mecænas of his day, whose mansion was a grand museum, who kept a second table for his humbler dependents, and who was driven to his country house near Windsor by six horses, was not likely to amass wealth; but he did better—he acted according to his conviction, that what he had gained from the public could not be more worthily bestowed than in the advancement of the public mind, and he truly fulfilled the inscription which he had chosen for his motto, Non sibi, sed toti."(1)

The College of Physicians are indebted to Dr. Mead for the fine bust of Harvey in the library. It was done from an original picture in the doctor’s collection, and in the old College in Warwick-lane had under it the following inscription by Dr. Ward :—
Hanc Magni illins Gulielimi Harvell
senis octogenarii imaginem,
qui sanguinis circuitum primus monstravit,
medicinamque rationalem instituit,
ad picturam archetypam, quam in suo servat Museo,
effictam,
honoris causâ hic ponendum curavit
Richardus Mead Medicus Regius.

The College possess a splendid bust and three portraits of Mead. The former, executed by Roubiliac at the expense of Dr. Askew, and presented by him to the College in 1756, was in Warwick-lane supported on a bracket, which bore the following inscription:—
Hanc Richardi Meadii effigiem, literarum atque artis medicae statoris et vindicii perpetui, amicitiæ causa ponendam curavit Antonius Askew, M.D. 1756.

The larger and finer portrait was presented by Dr. Charles Chauncey in 1759; the portrait in profile by Mrs. Pelham Warren in April, 1836, and the remain ing portrait by Mr. Bayford on the 20th March, 1837. There is also in the Censors room a miniature portrait of Dr. Mead on ivory, which was presented to the College by the late distinguished surgeon, Sir William Fergusson, bart.