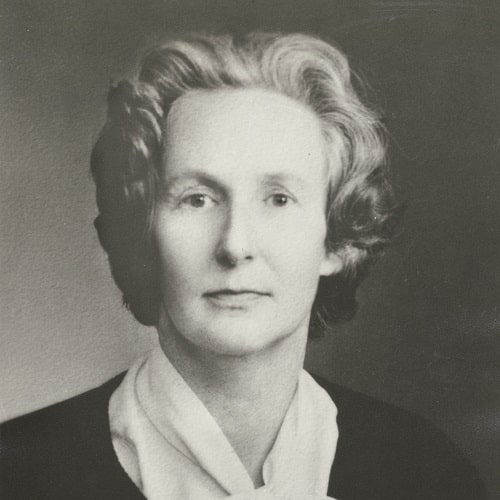 Patience Davies was born at Chippenham where her father, David Buxton Barclay, was a vicar. Her maternal grandfather was a bishop, and the discipline of service was a prevailing and pervading influence throughout her life. With this background, medicine was one obvious choice of career and, after preparatory school and public school in Essex, she entered the medical school of the Royal Free Hospital, taking her London degree in 1939.

After house appointments at the Three Counties Emergency Hospital at Arlesey, at Addenbrooke’s, and at the Radcliffe Infirmary, Oxford, she became RMO and registrar at the National Temperance Hospital in 1942. In 1943 she was appointed medical registrar at Great Ormond Street Hospital where she laid the foundation of her wide knowledge and skills in paediatric medicine. During her two years in this post she obtained her DCH; her chiefs there spoke of her obvious affection for and rapport with children, her capacity for prolonged hard work, her meticulous notekeeping, and her wide reading of both general and paediatric literature, and they predicted a distinguished career for her.

In 1945 she gained her membership of the College and in the same year, on VE-day, was conscripted into the RAMC. She was posted with the rank of captain to India, to Army hospitals at Agra, Jhansi, and finally Darjeeling. In Darjeeling she met Arthur Davies of the Burma Frontier Service, who was then recovering at the Darjeeling (Lebong) Officer Convalescent Depot from his three and a half years as a Japanese prisoner of war. They were married in Darjeeling on her birthday, 28 July 1946, and after a honeymoon in Nepal they returned to England in September of that year. The following year she joined F L King-Lewis, a children’s consultant physician, for three years in his general and specialist practice in London.

In December 1950, Patience and her husband moved to Kenya where she joined the Nairobi Clinic, a group of consultants, and it was in that country that the definitive part of her professional life was spent. She quickly established herself as the acknowledged consultant in her own field and she retained that position throughout her 26 years in Africa. The centre of her hospital work was Gertrude’s Garden Children’s Hospital, but she also held appointments at the Kenyatta Memorial, the Aga Khan, and the Mater Misericordiae Hospitals. She gave regular series of lectures and contributed several articles to the East Africa Medical Journal. She organized and dominated the practice of exchange transfusion for haemolytic disease of the newborn and her skill in intravenous therapy was legendary. She was responsible for founding the East African Paediatric Association and was its president for the first two years.

Patience was held in affection and immense respect by every member of the medical and nursing professions in East Africa. Some mothers were said to be in holy fear of her, for there was no sentimentality about her approach to her work or her patients and any criticism she might make of a parent’s inadequacies of care was direct, even forceful. But once the air was cleared and the way forward established she enjoyed their full cooperation and admiration. She gave selfless and devoted service to parents and children of all races and her positive manner, together with clear and concise appraisal and instruction, quickly established a feeling of great comfort and confidence that in her hands everything possible would be done. And, of course, it was done. In difficult and critical situations she had the gift of being both incisive and imperturbable.

Apart from her private work and hospital clinics, she had a large practice among the poor and needy whom she treated with equal devotion, in love, and for no reward save their recovery.

She and her husband left Kenya in 1976 and returned to England, where they settled in a charming house overlooking Dartmoor. For the next six years she did sessional work in the children's clinics in Plymouth. She finally retired in 1982.

Off duty, when she could relax, Patience showed the warm, generous person she was, and she was a marvellous friend. She and her husband enjoyed music and, for outdoor recreation, sailing. In Kenya they had kept a boat on the Nairobi dam. They had two children of their own: their son John is a chartered accountant and a successful business man in Kenya and Tess, their daughter, is married and lives in London. They also unofficially adopted, from early childhood, a brother and sister whom they saw through schooling and training, the girl becoming a nurse. Patience was also survived by a brother, an ENT consultant.

Her life was one of great value to many people, who will remember her with enormous gratitude.