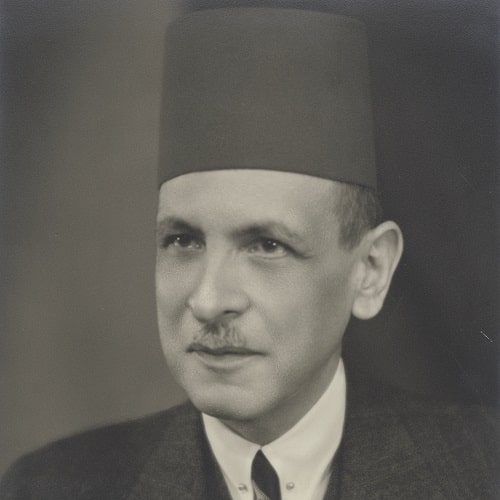 Naguib Mahfouz is justly considered to be the founder of modern obstetrics and gynaecology in Egypt. He was bom in Mansoura, a city north of Cairo, where he attended the American Mission School, obtaining the primary certificate in 1895. He was then transferred to Cairo, where he was accepted at the Tewfikiya Secondary School. There he distinguished himself by graduating in three instead of five years. He then entered the Kasr-el-Aini School of Medicine in 1898, graduating at the top of his year in 1902.

He was appointed house officer in Suez, where he spent one year. There he became interested in ophthalmology and started an outpatient department on eye diseases. At the end of the year, in 1903, he was transferred to the Kasr-el-Aini Hospital as an anaesthetist. It was during this period that he introduced spinal anaesthesia for the first time in Egypt.

However, his main interest was in obstetrics and gynaecology, and it was in the following year that he convinced the Dean, Dr. Keatinge, of the necessity for the opening of a gynaecological and obstetrical outpatient department. This was such a success that two wards were allotted for gynaecological and obstetrical patients. Until that time there was no gynaecological out-patient department at the Kasr-el-Aini Hospital and hardly any gynaecological operations or cases of labour admitted. Mahfouz was then relieved of his anaesthesia responsibilities, and appointed assistant to Professor Dobbin, who had been Assistant Master at the Rotunda and had been offered the newly created Chair. In 1929, Mahfouz was appointed first Egyptian Professor of Obstetrics and Gynaecology.

In 1932, he donated his collection of specimens to the School of Medicine. These remarkable specimens were all fully described, photographed and drawn in half tone or colour. This collection, the Mahfouz Museum, was and is one of the leading museums in obstetrics and gynaecology in the world.

Mahfouz was an extremely gifted surgeon, and was considered a world authority on genito-urinary and recto-genital fistulae. He travelled extensively and lectured in most countries of Europe. He wrote over sixty papers and authored two books in Arabic in obstetrics and gynaecology, and in 1947 published his famous Atlas in three volumes. In 1963, he wrote his autobiography The Life of an Egyptian Doctor. Prof. Mahfouz was a deeply religious, compassionate person who suffered much by the death of his wife and three of his five children. He was famous for his hospitality and his home was open to any gynaecologist visiting Cairo. He had great respect and admiration for British obstetrics and gynaecology and was a leading advocate for close Anglo-Egyptian ties.

Other than his medical achievements, Prof. Mahfouz was a major authority in Arabic language, literature and history.