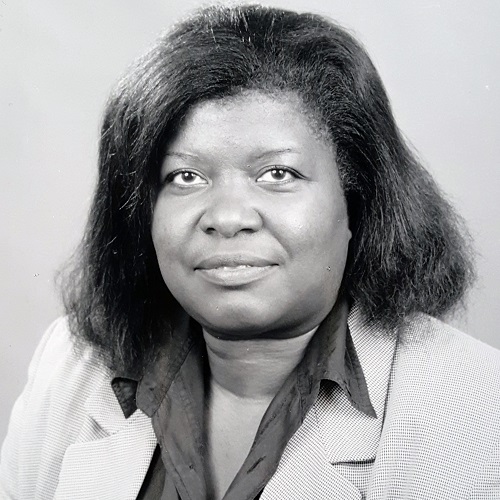 Muriel Buxton-Thomas, a consultant at King’s College Hospital, London, was an internationally-recognised physician in nuclear medicine who contributed actively to academic and clinical research throughout her career. The elder daughter of Claude Victor and Claudia Blanche Buxton-Thomas, she was born in Freetown, the capital of Sierra Leone. The family moved to London in 1955, where Muriel was educated at Wimbledon High School. She was admitted to Newcastle Medical School in 1965 and qualified in 1971.

Buxton-Thomas set herself a high standard in her medical practice and expected a high standard of work from her staff. Nothing was ever too much trouble at work and she was frequently to be found at her desk late into the evening and during weekends. She made it clear that she did not accept the second rate and was a vocal advocate for her department and the patients it served. The description ‘formidable’ has been applied to her character, but this appearance hid a sympathetic, kind and generous person who could not tolerate deception and who had an abiding Christian faith.

During her consultant appointment at King’s she was instrumental in the development of diagnostic and therapeutic nuclear medicine, overseeing the relocation of the department into the new golden jubilee wing of the hospital and the installation of one of the first PET gamma cameras in England. Her clinical work embraced many specialties, including endocrinology, adult and paediatric hepatology, osteoporosis and pulmonary medicine. All of these specialties benefited from her clinical enthusiasm and her support for new techniques.

Throughout her career in nuclear medicine and in spite of a busy clinical commitment, she continued enthusiastically with clinical research, publishing more than 50 research papers and contributing to three books. She was also an active contributor to many nuclear medicine meetings throughout the world, which resulted in more than 50 published abstracts. Her research work generated over £250,000 in research grants, a substantial achievement for an extremely busy clinician who ran her department single-handedly for many years.

Even after retirement her interest in nuclear medicine remained undiminished and she worked closely with colleagues at the Birmingham Neuroendocrine Tumour Centre to secure its status as a centre of excellence certified by the European Neuroendocrine Tumor Society.

Buxton-Thomas served on numerous committees during her consultant appointments, including important national roles for the Department of Health and the Administration of Radioactive Substances Advisory Committee (ARSAC). She was also instrumental in setting up the MSc in nuclear medicine with King’s College, London.

She always enjoyed her work, music, good food and the company of friends and she never allowed the problems of serious illness during her last few years to interfere with her lifestyle. She leaves a daughter, Rachel, a consultant respiratory physician at Brighton and Sussex University Hospitals NHS Trust, with whom she had a close relationship, and a grandson, Jago.