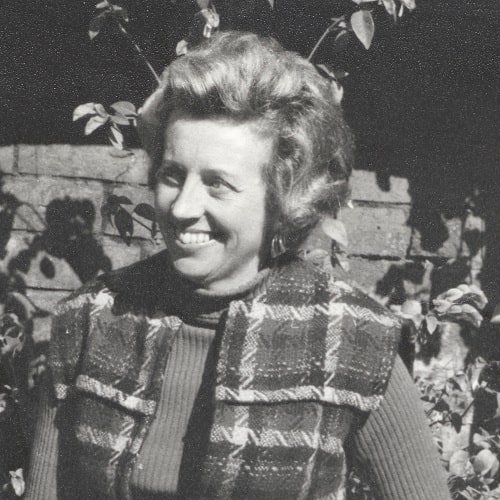 June Howqua was a distinguished consultant physician in Melbourne, having held appointments at Royal Melbourne Hospital and Queen Victoria Hospital. She was born in Melbourne, the daughter of Albert Henry Howqua, a financial adviser to the government, and Lillie Eileen née Currie, the daughter of a storekeeper. June was eight years old when the Great Depression arrived and those hard years left a lasting impression. Educated at Canterbury State School and University High School, June then won a scholarship to Melbourne Church of England Girls’ Grammar School. She excelled at school in all subjects.

June gained entry to Melbourne University to study medicine and was one of the early women pioneers in this profession in Australia. In the late 1930s there were only about half a dozen females amongst the 70 medical students. Ranking in the top ten of her graduating year, June Howqua gained a placement at the Royal Melbourne Hospital in the early 1950s. During this time, June developed an interest in heart and lungs, and decided to specialise in cardio-thoracic medicine.

To gain further experience, June moved to London, working as a ship’s doctor as a means of transport to the United Kingdom. She accepted a position at Brompton Hospital for Diseases of the Chest, which broadened her expertise in this field.

On returning to Melbourne in the early 1960s, June commenced work at the Queen Victoria Hospital in Lonsdale Street as a physician for in-patients. Established in 1896, the Queen Vic was the first women’s hospital in the colony of Victoria. June was to become one of its two leading physicians, the other being Priscilla Kincaid Smith.

While June’s specialty was in cardio-thoracic medicine, as a senior physician she could assemble a team for those difficult diagnostic problems in which she revelled.

When Monash University took over the Queen Victoria Hospital and its historic building in Lonsdale Street, the intellectual climate there blossomed. Its obstetric unit became the leading centre for in vitro fertilisation, while Dame Kate Campbell’s famous paediatric unit was expanded under Arthur Clark. June’s influence was considerable, as she became vice president of the hospital board of management.

June was a member of the Monash University assessment team for coronary surgery, and had established a coronary care unit at the Queen Victoria Hospital. She was also a member of the standing committee on ethics in human experimentation and IVF.

June initially established her private practice in Anzac House on the corner of Collins and Spring Streets, Melbourne. In the late 1960s, June purchased a rundown former boarding house at 135 Powlett Street, East Melbourne. With the help of her family, she was able to refurbish the building to create a residence and practice. Always busy, June continued her work at the Queen Victoria Hospital in addition to her private practice.

June Howqua retired from the Queen Victoria Hospital in 1989, when the hospital moved from Lonsdale Street to Clayton. She continued to see patients in her very successful private practice until 1996 when, at the age of 75, she commenced a gradual progression to full-time retirement over the following five years.

Throughout her long and distinguished career, June was highly esteemed for her extraordinary energy and focus, for her ability to be absolutely thorough, caring about the details, but mostly for caring about her patients.

June enjoyed her retirement from medicine. She was able to re-commence her education and opted for classical studies. Every year she enrolled in different classical subjects at Melbourne University, and she was so excited and passionate about her results! She was able to spend more time at her country property at Flowerdale, to the north of Melbourne, where she grazed cattle. She also engaged in volunteer work with the Brotherhood of St Laurence, where she assisted every week at a facility serving food to the under-privileged.

June will remembered by Helen as a loving sister, by her nephews, Ian and William, as a devoted aunt, by her friends as a trusted and loyal confidante and by her medical peers and patients as a pre-eminent and conscientious doctor and researcher, who made a difference to the lives of many. June asserted her egalitarian beliefs in the way she conducted her life, and it is no surprise that her entry in Australia’s Who’s Who, concludes with her creed, her formula: “Treat all people as equals”.