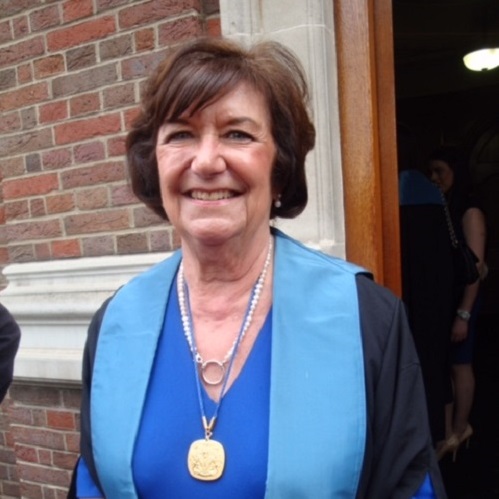 Judith Elizabeth (‘Judy’) Adams was professor of diagnostic radiology at the University of Manchester and an honorary consultant radiologist at the Manchester Royal Infirmary. She became one of the longest serving consultants in the Central Manchester University Hospitals NHS Foundation Trust, remaining in post until her death in 2017.

Born in Huyton, Liverpool, she was the first-born child of Barbara Lockyer (née Bailey) and Charles Lockyer. Judy and her younger sister Jane were blessed with loving parents – Barbara being a teacher and Charles a metallurgist. The family initially moved to Germany, where Charles served in the control commission with the British Army of the Rhine. In 1952, the family moved to Mufulira in what was then Northern Rhodesia, where Charles took up a post as refinery superintendent of the copper mine and Barbara taught in a local primary school. Judy’s joyful and carefree upbringing in Africa had an indelible impact on her and she spoke often and fondly of her time there. She and her sister enjoyed a vast menagerie of pets, including bush babies and a jackal called Kimmie. Judy was an accomplished horse rider and always kept a photo of her beloved horse Sir Yuki. She also excelled at school, not only academically, but also as a swimmer and diver.

Having completed O Levels at Mufulira High School, Judy went on to study A Levels at Roedean School in Brighton in 1961. This was a huge culture shock and being so far from home was a challenge, which instilled Judy with her characteristic resilience.  She studied medicine at University College Hospital, London. Whilst there, she enjoyed fencing, winning full colours and representing the British Universities team.

Having qualified in 1968, she held junior posts at University College Hospital, London, and at Addenbrooke’s Hospital, Cambridge. Her training in radiology began at the Manchester Royal Infirmary in 1972. Her mentors included Sir Godfrey Hounsfield, the inventor of X-ray computed tomography, and Charles Dent, who pioneered the study of metabolic bone disease in the UK. She also worked closely with Ian Isherwood both in research and in the Manchester radiology training scheme. She gained the fellowship of the Royal College of Radiologists in 1975, became a lecturer at the University of Manchester in 1976, a senior lecturer in 1979 and was appointed professor and head of clinical radiology at the Manchester Royal Infirmary in 1993.

In 1972, she married Peter Adams; they had met at Addenbrooke’s Hospital, Cambridge, where he was a senior registrar. Peter became professor of medicine at the Manchester Royal Infirmary. They collaborated on research into metabolic bone disease and enjoyed a happy and successful 45-year marriage. Outside of medicine, they had shared passions for travel, opera and gardening.

Judy was a member of many societies, including the American Society for Bone and Mineral Research, the European Calcified Tissue Society, the National Osteoporosis Society, the Bone Research Society (UK), the International Skeletal Society and the European Society for Skeletal Radiologists. From 2000 to 2001, she was president of the Manchester Medical Society, only the second woman to hold the position since the Society was founded in 1834.

Her clinical and research expertise lay particularly in adult and paediatric osteoporosis, bone densitometry, quantitative computed tomography and vertebral fracture recognition. She produced 34 book chapters and more than 200 peer-reviewed publications, the most recent of which was completed only weeks before her death. ‘She brought important and relevant clinical science to the discipline of radiology in the areas of osteoporosis, bone densitometry, and vertebral fracture assessment,’ says Harry K Genant, professor of radiology, orthopaedic surgery, medicine and epidemiology at the University of California in San Francisco. He added that: ‘She was gracious, thoughtful, engaging, generous, kind hearted, and beloved...she will be dearly missed by so many of us around the world.’

Judy loved teaching and trained hundreds of radiologists through her work with the Manchester radiology training scheme and the Royal College of Radiologists, where she served as head of training between 1993 and 2007. A number of her trainees said that her kindness, inspiration and commitment were invaluable to them. ‘Judy was a passionate medical researcher who inspired all around her,’ says Tim Cootes, who was a co-author on more than 20 papers with her during the latter part of her career. Cootes, of the centre for imaging sciences at the University of Manchester, adds: ‘She was always enthusiastic about her research and that of those around her. She mentored many people and nurtured the careers of numerous colleagues.’

She was an adviser and trustee of the National Osteoporosis Society, and a pivotal member of their clinical and scientific committees. In 2016, she was awarded the Linda Edwards award of the National Osteoporosis Society in recognition of her outstanding contribution to the field of osteoporosis. She was awarded with a gold medal by the International Skeletal Society in 2007, an honorary membership of the European Society of Musculoskeletal Radiology in 2012 and in 2015 she was invited by the Bone Research Society to co-present the annual Dent lecture. At the Royal College of Radiologists, she was an examiner, a regional education adviser, a member of council and of other boards, and dean and vice president. In 2016, she received recognition for her lifelong achievement when the College awarded her its gold medal.

One of Judy’s passions was travel and she felt fortunate that her job allowed her to visit many wonderful places. She regularly travelled the world, attending and speaking at conferences, as well as examining in Hong Kong, Singapore, Finland and Malaysia. She always ensured she got the most she could from her trips abroad, both professionally and socially. A colleague, John A Shepherd, fondly recalled Judy’s sense of fun when, following a meeting in Monterey, California, she demonstrated her limbo and hula-hooping skills on the beach, lightening the mood after a long day of meetings. One of her close colleagues Michael Machin commented that Judy was ‘a towering figure who inspired respect, admiration, affection and love in all those fortunate enough to collaborate with her.’

Latterly, Judy used her expertise to elucidate skeletal pathologies in ancient Egyptian mummies both human and animal, collaborating with researchers at the University of Manchester, including Rosalie David and Lidija McKnight. This included making a diagnosis of a case of Osteogenesis Imperfecta Type V, 3000 years later!

She bravely battled cancer in the last months of her life, but was still able to find the energy to make her final examining trip to Singapore in February 2017. She predeceased her loving husband Peter by just eight days.

Despite her international reputation and significant professional achievements, Judy remained selfless and humble, preferring to hear about the news of friends old and new rather than talk about herself. She will be remembered as an outstanding radiologist, but also a generous and energetic colleague, teacher and friend who loved bright clothes and possessed an infectious laugh. She was an adored mother to her sons Charles and James, a beloved sister to Jane and a doting grandmother to Robyn, Evan and Lola. Her fourth grandchild, Neave Judith Elizabeth Adams was named in her memory in February 2018.