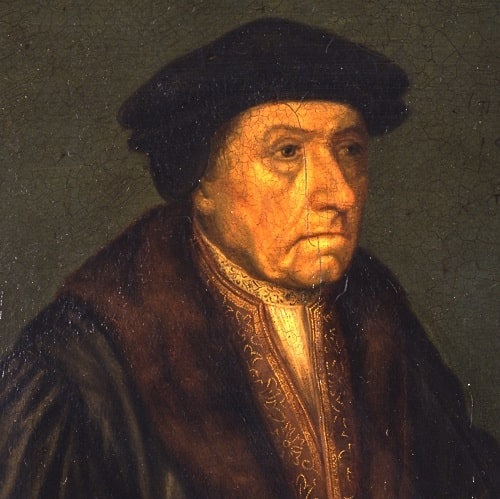 John Chambre, M.D., the first in order of the six physicians specially mentioned in the letters patent of Henry VIII for the foundation of the Royal College of Physicians of London, is remarkable rather for the position there assigned to him than for his services to the infant institution, in the management and success of which he does not appear to have been warmly interested. Though surviving the foundation of the College for more than thirty years, I meet with him but once as elected to any office, namely, to that of Censor, in 1523.

Dr. Chambre was a native of Northumberland, and was designed for the priesthood in early life. In the Church, unlike his distinguished colleague Linacre, who received ordination when of middle age, he obtained preferment before he attached himself to the study of medicine. Of Chambre’s family nothing is known. In 1492 he was elected to a fellowship of Merton College, Oxford; and about that time was presented to the church of Tychmarsh, in Northamptonshire. Having taken the degree of M.A., he, in 1502, travelled through Italy, and studied at Padua, where he graduated in physic [in 1506. He was at Rome and entertained at the English College there 24 Sept 1506. Vide Foleys Records of the Society of Jesus, 8vo Lond 1880, Vol. VI, p.546]; and, on his return to England, became the King’s physician.

In 1508 he was presented by the widow of Lord Scrope to the church of Bowden, in Leicestershire; and he became canon of Windsor in 1510. In 1522 he obtained the prebend of Combe and Harnham, in the church of Sarum; and in 1524 was collated to the archdeaconry of Bedford. Two years afterwards he was elected warden of Merton college, to which he was a benefactor. On the 29th October, 1531, he was incorporated doctor of physic at Oxford: “a certificate of it,” says Wood, “was sealed with the university seal, the 16th November following, and forthwith sent to him.”

In 1536 he subscribed [Munk strikes out the words ‘he subscribed’ and adds: 1534 he subscribed to the Royal Supremacy and in 1536] to the Articles of Faith, in a convocation of the clergy, as dean of the collegiate chapel of St. Stephen’s, Westminster. In 1544 he resigned the wardenship of Merton, and in 1545 the treasurership of the cathedral church of Bath and Wells, of which he had also been possessed. He held likewise the archdeaconry of Meath, from which he was exempted residence by letters patent of Henry VIII, on account of his attendance on the King in quality of physician. He succeeded Linacre in this station when the health of the latter precluded his residence at court; and was the messenger to him of the King’s pleasure, that his translation of “Galen’s Method of Healing” should be dedicated to Henry.

Dr. Chambre stood high in the estimation of his sovereign, of which his pluralities in the Church may be received as proof. He appropriated a portion of his wealth to the Church, from which he had obtained it, by building cloisters to his collegiate chapel at an expense of 11,000 marks. This splendid act of liberality was done at a time when benefactions to the Church were growing out of use.

With his medical qualifications we are acquainted only from a MS. Pharmacopoeia of plasters, spasmadraps, and unguents, in which are several recipes which he composed jointly with Dr. Butts, Dr. Cromer, and Dr. Ang, principally for the King’s use. (1) The mode in which these medicaments are directed to be prepared is very complicated, and, like all the prescriptions of the sixteenth and seventeenth centuries, they contain, amongst a few efficacious articles, many which are foreign if not useless to the purposes for which they are designed.

Dr. Chambre died in 1549, [His will 1549 is at Somerset House (36 Popelwell?) Mr. J. C. C. Smith’s Notes] having outlived the five other physicians specified by name in the charter of the College, and was buried in the church of St. Margaret, Westminster, [Munk strikes out the words ‘in the church of St. Margaret Westminster’ and adds: in the crypt of St. Stephen’s chapel and when the architect of the new Palace of Westminster was proceeding to erect the new crypt on the old site the body of John Chambers the dean of St. Stephen’s was found buried in a (?). It was deemed right to remove and reinter it in the north cloister walk of Westminster Abbey. A (?) grave stone was displaced and the remains deposited and the grave stone was replaced. This was in Dean French’s time and Dean Stanley had a short inscription cut on the stone. From Mr. Henry Poole of 40 Adelaide Road Haverstock Hill, formerly of the Old Rectory Smith Sq., Westminster. 5 Feb 1887] having lived to see the destruction of the buildings which he had reared at such great cost, and the appropriation of the revenues of his deanery to the augmentation of the royal purse. (2)