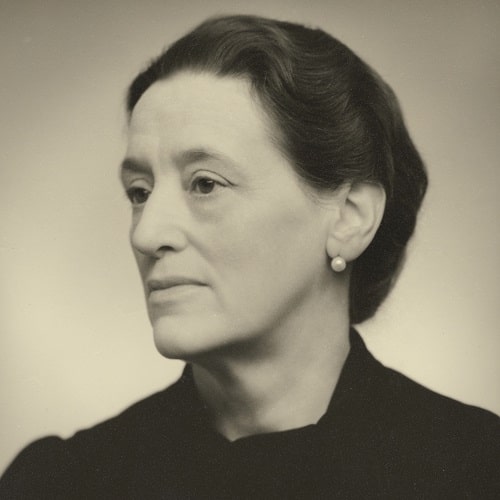 Janet Aitken was born in Buenos Aires, Argentina, of Scottish parents, being the second of five sisters. Her grandfather was the engineer concerned with the building of the ill-fated Tay Bridge. When she was four years old the family returned to Lancashire, England.

Janet could have succeeded in almost any walk of life, certainly in music —which was her first love— and in medicine or administration. In fact, in these three things she succeeded admirably. She was educated at St Leonard’s School, St Andrews, where she became head of her house. She studied piano, taking her LRAM, and also singing, being a pupil of Madame Fillunger who was a friend of Robert Schumann. The Manchester School of Music awarded her the gold medal for singing in 1912, which almost decided her future career.

When the first world war broke out, however, she trained as a masseuse and passed the examinations for the Incorporated Society of Masseurs, which led to an interest in anatomy and physiology and a decision to study medicine. She entered the London School of Medicine for Women in 1917 and qualified in 1922, proceeding MD in 1924, and obtaining the MRCP in 1926.

She began her medical career at the Elizabeth Garrett Anderson Hospital as house physician, was clinical assistant during time spent in general practice in Kensington, and was appointed consultant physician in 1929. In that same year she was appointed physician in charge of the Kensington Supervisory Rheumatic Clinic for Children, and juvenile rheumatism remained always of special interest to her. From 1930 to 1934 she was vice-dean of the Royal Free Hospital School of Medicine, a member of the Central Health Services Council and of four hospital management committees. She was appointed CBE in 1950.

Janet was a tall, handsome and dignified woman with a lovely sparkle, whose entry into a room could not be ignored. She was dark, with brown wavy hair and dark eyes. She was a very warm person, infinitely generous with her money, and her possessions, her time and her concern. No one ever went to her for help, advice or interest and came away empty-handed. Her beautiful speaking voice had a Scottish lilt which became more pronounced when she was excited. And she was such fun; her twinkling brown eyes, wit, humour — always kindly, but sometimes critical and sharp - were unforgettable.

She enjoyed everything she did, and did it well; playing as hard as she worked. She performed as a solo singer at the Queen’s Hall Proms and enchanted her colleagues by singing in the Royal Free productions of Gilbert and Sullivan.

During the second world war she remained in London in charge of the casualty clearing unit at the Elizabeth Garrett Anderson Hospital, and her presence, well dressed and elegant, had a magical effect on hospital and patient morale. She would talk to the residents calmly and naturally as the bombs fell.

In addition to her work and her music, she loved books and dachshunds, and revelled in the beautiful Donegal island home of her friends, Helen Mayo and Andy Sharpe. Although she never married she had a large and devoted family, among whom she was a leader, and she delighted in all her nephews and nieces. In her last years she was devotedly cared for by her companion and friend, Althea Jackson, and her niece Lilias Grey-Turner.

She aged remarkably little in appearance; her hair was barely streaked with grey and her eyes were as bright as ever. Even when confined to a chair, and later bedridden, she loved to see her friends and hear of their doings. She was quick to enjoy the company of young people, to whom she transmitted much of her wisdom, with unfailing wit and humour.