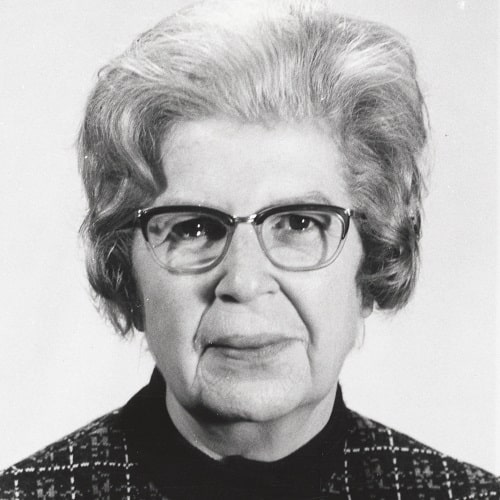 Ina Cook was assistant secretary and then secretary of the Royal College of Physicians, beginning her career in 1934 and retiring in 1969. She was born in Anstruther, Fife, the daughter of David Cook, a solicitor and his wife, Janet. Ina was educated at Laird Academy, Anstruther, and the University of Edinburgh where she gained her MA and LLB. The new female graduate found there were few openings for a woman of her qualifications in Scotland and so she came to London. She applied for a job as assistant secretary of the Royal College of Physicians of London. She was interviewed three times, first by Lord Dawson of Penn [Munk’s Roll, Vol.IV, p.446], the President, then by Sir Raymond Crawfurd [Munk’s Roll, Vol.IV, p.427], the Registrar and then there was an appointments committee.

Ina arrived one September morning in 1934 at the old College in Pall Mall East on the side of Trafalgar Square. There was no proper office and Ina occupied the small library next to the Censors’ Room. It was made absolutely clear that this was a library and not an office, but she managed to find a table, a chair, a typewriter, a small supply of headed paper and a telephone. At first she had it to herself, but later shared it with Frank Ridehalgh [Munk’s Roll, Vol.VII, p.495], the Prophit Scholar, and also the auditor. Later on all the College officers, with the exception of the President, joined her.

The Treasurer, Sidney Phillips [Munk’s Roll, Vol.IV, p.351], was over eighty and kept all the books in his own illegible hand until he got too blind when he had the auditor in to help him. One of Ina’s duties was to listen to the Treasurer’s stories of how he caught a spy, part of his experiences as a special constable, while Ina was hopping from one foot to the other trying to coax him to sign the cheques.

There were no filing systems at all and Ina managed with great difficulty to clear some shelves in the small library and start a lateral filing system, very much against the wishes of the registrar who was "against filing". At that time there were about five hundred Fellows so when Comitia was summonsed or there was a circulation to be done all the envelopes had to be typed. Ina did this twice and then asked for an addressograph. The next request was for a duplicator as all memos had to be typed with carbons several times. At last this was also agreed and the College moved one step nearer an efficient office administration.

Relations with Mr Barlow, the secretary, were very strained. He tried to get rid of Ina several times. On some mornings Sam, one of the porters, would sweep at the very end of the pavement, warning Ina that the secretary was after her blood. Then Dodd, another porter, would warn Ina as she came in the door that the secretary was on the war path. She and Mr Barlow would then have a shouting match and things went on as before. Occasionally Ina was asked to do some of the secretary’s typing. He wrote his letters by hand and then had them typed, he would not do any dictation.

Another of Ina’s jobs was to interview candidates for the membership and hand out regulations. There was a kind of index card system but they were never kept in any kind of order. But at last Ina suggested that there should be a proper alphabetical index. The written examination for the membership and the path viva (the correct name was the first oral examination) and the final oral were all held in the College in the large library. It was Ina’s job to inform the candidates of their failure or else demand a cheque for 30 guineas, or 10 guineas if they were already licentiates of the College.

In 1944 the secretary Mr Barlow became ill and had to retire so Ina continued, although she was to remain as the assistant secretary for many years to come, with no secretary appointed.

When Sir Charles Wilson (Lord Moran) [Munk’s Roll, Vol.VII, p. 407] became President of the College he began to use the Censors’ Room as his office and required lunch. As it was war time the College acquired a catering licence. So that a sufficient number of meals were consumed Ina had to have lunch at least three times a week at his desk. The wife of Mr Dodd the head porter became cook-housekeeper. Although she was a good cook Ina had to eat tinned herring and rice pudding for days on end.

Sir Raymond Crawfurd was succeeded by Sir Henry Tidy [Munk’s Roll, Vol,V, p. 414], who was also a general with little time for the College. However, one of the excitements was being driven by Sir Henry to attend meetings at the BMA or RCS. He explained to Ina that taxi drivers and policemen were much more polite when he drove down one way streets against the traffic when he was in uniform. So far as the administration was concerned this did mean that Ina was allowed to attend Comitia, draft and type the minutes of this and the various committees. It also gave her an opportunity to expand the staff.

While Lord Moran was President Lady Moran also came and worked in the College as her husband’s secretary. There used to be quite a contest for Ina s desk and typewriter. Often she would come in to find Lady Moran already installed.

Before the war there had been talk of a move out of Trafalgar Square which was really too confined for any expansion. The problem was the 999 year lease. However under Lord Platt’s [Munk’s Roll, Vol.VII, p.470] Presidency these discussions were renewed and the decision was taken by Comitia that a move should be made. Eventually the move out of Pall Mall East was made after 137 years and on the final evening a candlelight party was held in the old Censors’ Room.

The staff moved to what is now the Albany Street end of the present building while building work continued on the main part of the College. Ina was responsible for the ceremonies, the laying of the foundation stone by the Queen Mother and the opening of the College building itself by HM the Queen.

She retired in 1969 after 35 years service to the College. She was a sound administrator, although perhaps rather old fashioned. It was impressed on everybody that the punctilious traditions of the College should be observed.

Ina’s work for the College was recognized by the award of an MBE and also election to an honorary Fellowship. She lived in her retirement in Brighton in a house with her friend Ellinor Grant (always known from her initials as Egg). They became friends at Edinburgh University. Egg first came to London, getting a job on The Lancet. It was she who through a contact made the introduction to Sir Raymond Crawfurd, the Registrar of the College.