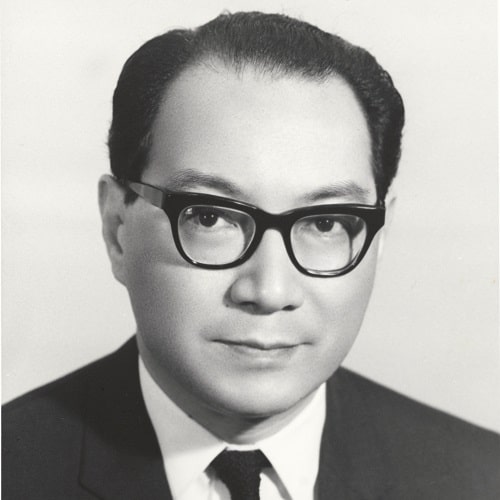 Gerald Choa was a distinguished director of medical and health services in Hong Kong and founding dean of medicine at the Chinese University of Hong Kong. He came from a prominent local family, attended a Jesuit secondary school and was a devout Catholic from an early age.

Medical studies at the University of Hong Kong were interrupted by the Pacific War but continued at Cheeloo University Medical School in Free China. He qualified MD Cheeloo in 1945 and MB BS Hong Kong in 1946. From 1944 to 1945 he was a major in the Chinese Army Medical Corps. An outstanding student, he underwent postgraduate training at the Universities of Liverpool and Birmingham and at Queen Square, London, and obtained the DTM&H and the MRCP.

He was a lecturer in medicine at the University of Hong Kong from 1952 to 1956. A superb clinician and gifted teacher, he applied his expertise, particularly in cardiology and neurology, to the benefit of patients, undergraduates and trainees. Although outwardly stern, he was kind and generous and always helpful when approached. Impeccably dressed, he was the gentleman physician.

In 1956 he became the first Chinese to be appointed specialist in medicine at Queen Mary Hospital, Hong Kong, where he was in charge of a large medical unit. From 1963 to 1967, he was senior specialist. His publications included observations on haemolytic anaemia in typhoid fever and the neuroparalytic accidents of anti-rabies vaccination. Some of his trainees have become professors, consultant physicians or senior medical administrators.

Much as he loved clinical medicine, and was in turn highly regarded as a physician, he left clinical practice at the invitation of the Hong Kong government to join the medical and health department. He quickly progressed through the ranks and in 1970 was appointed director of medical and health services, a post he held with distinction until 1976.

In this period, Hong Kong saw a rapid expansion of hospital and outpatients' services, the establishment of community and geriatric nursing and a re-organisation of family planning. The health problems of the 'boat people' from Vietnam were ably dealt with.

He was chairman of the Action Committee Against Narcotics and introduced methadone treatment clinics for drug addicts. He also served on the Legislative and Executive Councils of the Hong Kong government, as well as being chairman or a member of many professional and charitable organisations. He was adroit and effective in committees and honest and fair in his deliberations. In 1972 he was awarded the CBE for services to the community.

While most senior civil servants in Hong Kong retired at the age of 55, he accepted a new challenge and became founding dean of the new faculty of medicine at the Chinese University of Hong Kong in 1977. His leadership in the planning of the teaching hospital and curriculum, and recruitment of teaching and research staff contributed to its great success. He was also appointed professor of administrative medicine and later pro-vice-chancellor of that University. He retired at the end of 1987 and was awarded an Hon LLD. However, he really did not cease to work and remained honorary adviser to the vice-chancellor and continued to serve on committees of many charitable and professional organisations. He also returned to part-time clinical practice and was in charge of a health assessment clinic.

Gerald Choa had a deep interest in history and was an authority on the development of western medicine in China. His two books reflect this. The life and times of Sir Kai Ho Kai (Hong Kong, Chinese University Press, 2000) is a fascinating biography of the first Chinese in Hong Kong to qualify in medicine and the second Chinese barrister to be admitted to the Supreme Court. His second book is a meticulously researched account of the Protestant medical missionaries in China and describes how they contributed to the establishment of western medicine and medical education in the country. It also details the medical scene when Hong Kong fell to the Japanese in 1941.

He will be remembered for his leadership in the profession and a life dedicated to public service. Notwithstanding his many achievements and high office, he remained a modest and unassuming man. He married Peggy Leung in 1954 who survived him. They shared a wide circle of friends and were gracious hosts. His hobbies included swimming, hill walking, stamp collecting and listening to mainly Britten, Mahler and Wagner.