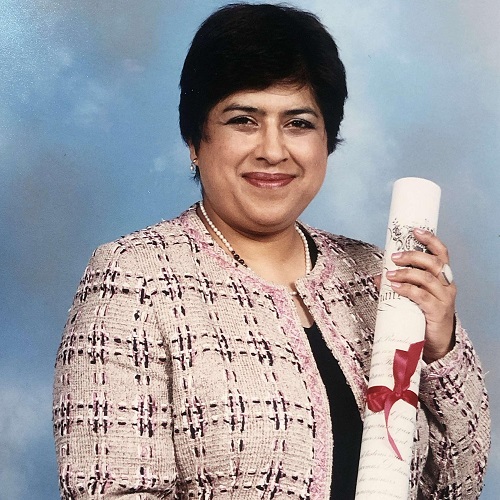 Faieza Qasim was a consultant renal physician at Manchester Royal Infirmary. She was born in Nairobi, Kenya and at the age of four decided she was going to become a doctor, a commitment and passion she held throughout her life. As the first Muslim pupil at Bradford Girls’ Grammar School, she excelled in her studies and blazed a trail for bright children from all backgrounds. In spite of the devastating loss of her father, who died a few months before her A level exams, she achieved the highest mark in the UK for biology A level.

In 1980, she went on to Newnham College, Cambridge University on a scholarship, at a time when the university and medical student intake were overwhelmingly white and male. What would now be termed microaggressions in relation to race and gender were endemic, yet trivial compared to the blatant racism and sexism of some senior doctors and academic staff. Faieza directly challenged these behaviours and had a simple belief that she and her colleagues should be judged on their merits. She was a popular student, was elected president of the Clinical Students’ Society, and threw herself wholeheartedly into student life.

She qualified in 1985 and, following house jobs at Addenbrooke’s and in Leeds, and a registrar rotation in Newcastle, she returned to Cambridge in 1992 for a PhD, and was awarded a Medical Research Council fellowship. She carried her scientific interest in transplantation and vasculitis forward into her clinical career, securing grant funding and supervising research students.

In 1999, she was appointed as a consultant nephrologist in Manchester. She was an active supporter of the Kidney Patient Association, involving patients in research and education programmes. She was also a consultant to the Noor Foundation, a charity which provides free haemodialysis to patients in Pakistan.

Following her retirement from the NHS, she was a Care Quality Commission inspector and remained active in teaching and training. She undertook regular teaching sessions at the Royal Free Hospital and was about to complete a masters degree in medical education.

She was an enthusiastic tennis player at the Northern Tennis Club, a regular at the ballet and opera, and an avid reader and talented cook. She had planned to continue in medical education, and write both her autobiography and a novel.

Faieza died suddenly at home from an acute myocardial infarction. She inspired her two younger brothers into medicine, one is a professor of cell and gene therapy, the other an interventional cardiologist. She had devoted the last year to caring for her mother and sister. Her family and friends, and their children, who could always count on auntie Faieza for help and support, mourn her loss and, with fond memories, celebrate her life.