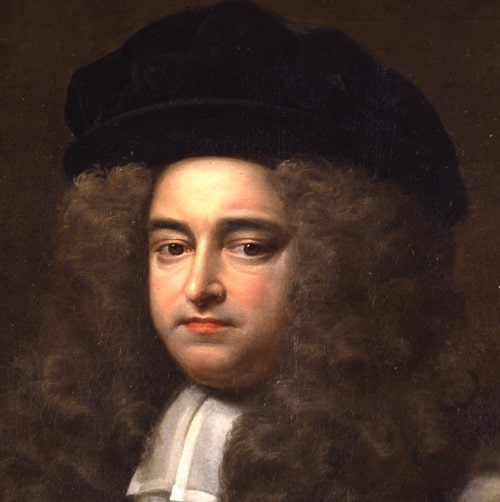 Edward Tyson, MD, was born, according to some accounts, at Bristol, according to others at Clevedon, co. Somerset; but was descended from a family which had been long settled in Cumberland. He was educated at Magdalen hall, Oxford, as a member of which he proceeded bachelor of arts 8th February, 1670; master of arts, 4th November, 1673. His degree of doctor of medicine he took at Cambridge, in 1680, as a member of Corpus Christi college. Dr Tyson was admitted a Candidate of the College of Physicians 30th September, 1680, and a Fellow 2nd April, 1683. He was Censor in 1694, and held the appointments of physician to the hospitals of Bridewell and Bethlem, and of anatomy reader at Surgeons' hall.

He was a fellow of the Royal Society, contributed several valuable papers to the Philosophical Transactions, and was the author of the following works:-

Dr. Tyson is the Carus of Garth's "Dispensary," and is thus described: -
Slow Carus next discover'd his intent,
With painful pauses mutt'ring what he meant;
His sparks of life, in spite of drugs, retreat
So cold that only calentures can heat.
In his chill veins the sluggish puddle flows,
And loads with lazy fogs his sable brows;
Legions of lunaticks about him press,
His province is lost Reason to redress.
So, when perfumes their fragrant scent give o'er,
Nought can their odour like a jakes restore.
When for advice the vulgar throng, he's found
With number of vile books, besieged around.
The gazing throng acknowledge their surprise,
And deaf to reason, still consult their eyes.
Well he perceives the world will often find
To catch the eye is to convince the mind:
Thus a weak state by wise distrust inclines
To numerous stores and strength in magazines.
So fools are always most profuse of words,
And cowards never fail of longest swords.
Abandoned authors here a refuge meet,
And from the world to dust and worms retreat.
Here dregs and sediments of auctions reign,
Refuse of fairs and gleanings of Duck-lane;
And up these walls much Gothick lumber climbs,
With Swiss philosophy and Runick rhymes;
Hither, retriev'd from cooks and grocers, come
M- works entire, and endless reams of Bl-m.
Where would the long neglected C-s fly,
If bounteous Carus should refuse to buy?
But each vile scribbler's happy on that score -
He'll find some Carus still to read him o'er.

Dr Tyson's portrait is in the College. It was presented by his great nephew, Richard Tyson, MD, 25th June, 1764.