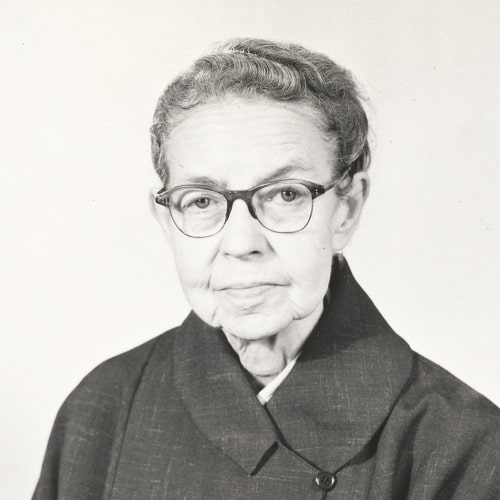 Doris Baker was a true Londoner; born in Kensington, educated at Kensington High School, and spending most of her working life within the sound of Bow Bells. She was the second child of Edward Baker, who was in the drapery business, and his wife Fanny Peek Manning. The older child was a son. The ruling spirit in the home was quite evidently Mother — who supervised education, instilled good manners, and to whom Doris was devoted. The male members of the family remain rather remote and nebulous and, indeed, vanish altogether from the scene at a fairly early period. Mother and daughter remained together all through the mother’s long life; Mrs Baker reached her 80s and died during the second world war. In her later years she developed glaucoma and eventually became quite blind. This made her very dependent on her daughter and Doris’s life, after working hours, was given over to her. In holiday times the two travelled abroad in trains and buses, Doris describing all that she saw and Mrs Baker conjuring it all up and remembering what she was told so that anyone not knowing the extent of her disability would have thought she had seen it.

After leaving school, Doris took a course at Chelsea Physical Training College. She was always reticent about this period and one does not know how it fitted into the scheme of things. It does, however, appear to give a slant to the direction she was to take. She decided on medicine, taking the first MB as an external student and then entering the Medical School of St Mary’s Hospital, Paddington. At this time men were flooding back from the Forces following the end of World War I and the Medical School was very full. It was a difficult moment for a woman to obtain a house post but, on qualifying in 1924 with the Conjoint Board she became clinical assistant to the Ophthalmic Department, and - the final MB BS over — house physician to the Medical Unit, a post she had always wanted. When this ended she was appointed Junior Pathologist at the Elizabeth Garrett Anderson Hospital and studied for the MD and DOMS, in both of which she was successful. There followed the MRCP which she gained at the first attempt, and she was launched into Medicine.

Keeping herself going by clinical assistantship locums, and small appointments, the next step was Medical Registrar at the Elizabeth Garrett Anderson Hospital; then Physician there, and later Physician to the South London Hospital for Women. She also began her work in rheumatism, in clinics for the LCC School Service. This led eventually to a post at the Arthur Stanley Institute of the Middlesex Hospital. She published two treatises on functional anomalies she had followed up at her clinics, tachycardia and sighing respiration.

At the outbreak of World War II she was appointed to a hospital at Farnham where she had charge of the geriatric wards. At this time geriatrics was the Cinderella of medicine and it gave her much cause for thought. Her long care of her mother had given her deep sympathy with old age, but the urge to do more active war service became too strong and she joined the RAMC with the rank of Major, specialising in physical medicine. In this capacity she travelled widely in the British Isles, examining entrants to the WAAC and organizing remedial treatment to fit them for the service. At the end of hostilities she served in Germany also. It was during this period that she contracted ‘influenza’ and, being determined not to go off duty, she carried on with her work — a decision she was to rue tor many years to come. The ‘influenza’ settled into a low grade pneumonia and ultimately into bronchiectasis and a pulmonary abscess, the after effects of which dogged her for the rest of her life.

Her army work finished, Doris Baker returned to London and took up her old appointments in General and Physical Medicine. She became active at the Royal Society of Medicine, served on the Council, and was twice elected President of the Section of Physical Medicine. After the introduction of the National Health Service she served on hospital committees at the Elizabeth Garrett Anderson, the Royal Free and the South London - and in some cases as Chairman - lectured to medical and nursing students, and saw patients in consultation both privately and for the National Health Service. This made a very full day for anyone living outside London (by then she had bought a house at Richmond) and who was constantly struggling with an infected bronchiectasis. Eventually she entered the Brompton Hospital for a lobectomy. When this was over she returned to work undaunted and carried on until retiring age, although her health remained precarious.

But retirement was not for her. The ensuing years had more locum work than leisure, travelling increased distances to hospitals outside London, starting earlier on account of rush-hour traffic, using all her will and determination and the very utmost of her strength until even these gave out. Throughout she maintained her customary kindness and consideration to patients, and courtesy towards staff and colleagues.

Doris Baker was a humanist. Her work was to help humanity and her pleasures were in the things that grace life; music, art, fine furniture and good books. If personal happiness was not in the programme, she had a deep satisfaction in feeling she had fulfilled her potentialities.