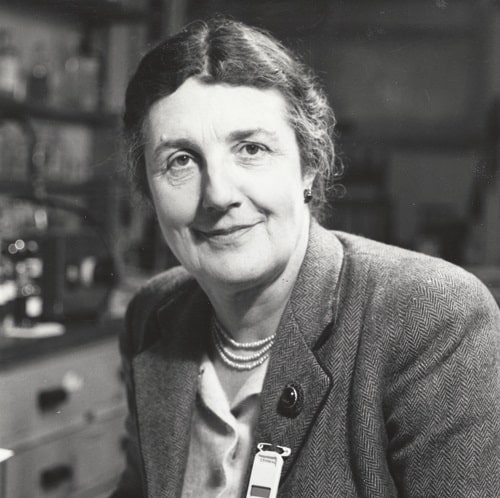 Dame Janet Maria Vaughan was one of the six women who were featured in the BBC’s series Women of our Century in 1984. She was tall and distinguished looking and at first acquaintance a rather imperious personage who would clearly stand no nonsense; yet deep down she was warm and generous. She was the daughter of William Vaughan, headmaster of Rugby School, and his wife Margaret Symonds, both of whom had had ancestors distinguished in medicine and historical research, according to Janet Adam Smith in The Independent 14 January 1993. One ancestor had been an 18th century president of the College and her grandfathers, Halford Vaughan and John Addington Symonds, had been respectively regius professor of history at Oxford and an historian of the Italian Renaissance.

Janet herself was educated at home until she was 15 and it was only after a struggle that she managed to get admitted to Somerville College, Oxford, where she obtained a first class degree in physiology. She had developed a keen interest in politics and this led her to study medicine in the belief that a career in medicine would best enable her to fight social injustice and poverty. She pursued her clinical studies at University College Hospital in London, where she had obtained a Goldsmith’s entrance scholarship. After qualification, following an appointment as assistant clinical pathologist at UCH, she was awarded successively a Rockefeller fellowship 1929-30, a Beit memorial fellowship 1930-33, and a Leverhulme fellowship 1933-34. During these appointments she came under the stimulating influence of several outstanding men of her time, including Sir Thomas Lewis [Munk’s Roll, Vol.IV, p.531], Montague Maizels [Munk’s Roll, Vol.VII, p.372] and Cecil Price-Jones at UCH; Donald Hunter [Munk’s Roll, Vol.VII, p.288] and Hubert Turnbull [Munk’s Roll, Vol.V, p. 425] at The London Hospital and George Minot [Munk’s Roll, Vol.V, p.286] and William Castle [q.v.] at the Boston City Hospital; she remembered her year at the Thorndike Laboratory in Boston as one during which she learned the full meaning of medicine both as an art and a science’. In 1934 she was appointed to the potentially important post of assistant in clinical pathology at the newly founded British Postgraduate Medical School (now the Royal Postgraduate).

She had early become interested in anaemia and was a pioneer in the use of liver extracts, at first home-made by herself, in pernicious anaemia. It was not long before she became a leader in the then almost embryonic specialty - in the UK at least - of haematology. In addition to her work on pernicious anaemia and liver extracts, she participated in the characterization of the various types of anaemia which was being brought about in the early 1930s by the careful measurement of red cell diameter, volume, thickness and haemoglobin content. In 1934 she summarized her own discoveries and experience, and the contemporary literature, in a remarkable book The Anaemias, Oxford, OUP, 2nd edn 1936, a classic of its time.

At the British Postgraduate Medical School, although appointed as clinical pathologist, her remit was in effect to teach haematology to postgraduates, to carry out research and to take charge of the routine haematological and blood transfusion services at Hammersmith Hospital. She undertook these tasks with apparently tireless enthusiasm and a rigorous insistence on high standards. She insisted, for instance, that all blood films should be kept as part of each patient’s laboratory record. She stressed, too, the importance of carefully standardizing laboratory methods and the necessity of having proper controls. Her research interest widened - from the establishment of normal haematological values to leuco-erythroblastic anaemia, myelosclerosis, acholuric jaundice (hereditary spherocytosis) and the anaemia of infection.

In 1938 and ’39 she began to take an increasing interest in blood transfusion. She had recognized its vital importance in the resuscitation of the wounded, as demonstrated by the need for blood in the Spanish Civil War. Her drive played a most important national role in the setting up of transfusion depots in the London area in anticipation of the casualties that were expected to result from air raids on London. She herself was appointed director of the NW London Transfusion Depot which was set up at Slough. In this position she played a major part in the evolution of transfusion practice and in the use of blood substitutes in the treatment of hypovolaemic shock. In 1945 she went on behalf of the MRC to Brussels to see to what extent she could, by observation and measurement, help in the resuscitation of liberated British prisoners of war who were suffering from starvation. From Brussels she went to Belsen concentration camp to a still more gruesome assignment, to help in the treatment of inmates actually dying of starvation and in particular to assess the value of concentrated protein preparations.

From Belsen she returned to Oxford as principal of her old college, Somerville, a post which she held with great distinction until her retirement in 1967. Her career as a haematologist had come to an end: she had been the author of 40 papers, written alone or in collaboration, which were published between 1928-1948 and she had played a major part in establishing haematology as a clinical and laboratory specialty. In Oxford she managed to combine the duties of principal of a college with a new career in science.

As a college principal she undertook her responsibilities with remarkable energy; she has been said to have regularly dealt with college business by 9.30am, a method of working which left her time to undertake other important social responsibilities and, above all, to pursue her thirst for research. She had been chairman of the Oxford regional hospital board in 1950-51 and a member of the Phillips Committee on the economic and financial problems of the provision for old age in 1953-54. Earlier she had been a member of the Commission on Equal Pay and had been appointed a Nuffield Trustee in 1945. One of her self-appointed tasks was to promote the cause of science in the University and in this she was remarkably successful. In relation to Somerville College she worked indefatigably for additional buildings and more staff; for more places for science students and overseas graduates. Her ability to get things done in Oxford - which had in fact been a strong personal characteristic throughout her life - earned her the title, according to the late Gwyn Macfarlane [Munk's Roll, Vol VIII, p.303], of ‘The Active Principal (or Principle?)’. She appears to have been well liked and generally respected and admired for her energy. She was also a staunch advocate of mixed sex colleges.

Her career in science at Oxford was a remarkable one. She directed her thoughts and energy to a serious contemporary problem - the use of nuclear energy for both civil and military purposes. She formed and led, eventually as honorary director, an MRC unit for research on bone seeking isotopes, a highly productive ‘school’ investigating the metabolism in laboratory animals - and in man - of nuclear fission products and fissile materials. Eventually she came to be regarded as a world authority on plutonium. The results of her and her colleagues’ research were described between 1950-76 in 62 publications and two books: The physiology of bone, Oxford, Clarendon Press, 3rd edn 1981 (first published in 1970) and The effects of radiation on the skeleton, Oxford, Clarendon Press, 1973.

In 1930 Janet Vaughan married David Gourley of the Wayfarers’ Travel Agency and they had two daughters. In her appreciation of Janet Vaughan in The Independent, Janet Adam Smith refers to the way in which David Gourley provided the right balance to his wife’s brilliance and how, as a consort to the principal of Somerville, he played his part beautifully ‘... with a kind of amused detachment...’. She regarded their holidays abroad as being high points in her life. When interviewed in connection with the BBC’s Women of our Century programme, Janet’s closing words were ‘I would like to be remembered as a scientist, but as one who combined work with a normal [family] life.’ She was truly a great and remarkable lady.