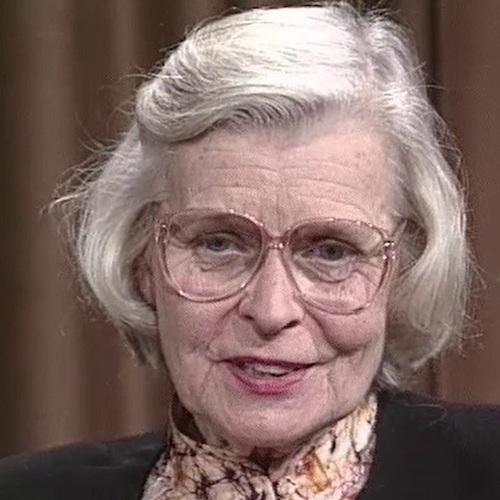 Dame Rosemary Rue was a highly effective and influential medical administrator who will perhaps be best remembered for her pioneering work helping to open up opportunities for women in the medical profession. She also played an important part in the re-shaping of public health as a new medical specialty, and in ensuring that doctors played an important role in directing and managing the emergent National Health Service.

Elsie Rosemary Rue was born in Hutton, Essex. The family moved to London when she was a small child, but she then found herself evacuated to Devon to avoid the Blitz. There she contracted spinal and abdominal TB, and it was while in hospital for a prolonged period that she decided to become a doctor. In 1945 she duly enrolled as a medical student at the Royal Free, one of the few hospitals where women could then study medicine. But when she became married three years later she had to move to Oxford to complete her training, as the Royal Free barred married students. She qualified as a doctor in 1951. Initially she found work in an Oxford hospital (Cowley Road), but was dismissed when the hospital’s administrators discovered that she was married and moreover was pregnant. It was quite usual in the early 1950s for hospitals to refuse to employ women doctors if they were married. She then found work in a general practice in east Oxford, but sadly in 1954 made what she often referred to as her ‘biggest mistake’ – contracting the polio virus from a patient only six months before the Salk vaccine was available. She was acutely ill, and was left so badly paralysed in one leg that she could no longer work as a GP.

Rosemary Rue spent the next 10 years in a variety of jobs as she slowly recovered function. Initially she taught chemistry and biology in a girl’s school. When her leg recovered enough she became an assistant in general practice once more. Shortly after she became assistant county medical officer and part-time paediatrician in Watford. Then in 1965, at the age of 37, she applied for the post of assistant senior medical officer to the Oxford Regional Hospital Board (ORHB). This move determined the rest of her career and gave her the wherewithal to bring about some of the changes that she was by now convinced were needed.

Over the next 25 years Rosemary Rue had an enormous influence on medicine and the health service, both within the Oxford region (Oxfordshire, Berkshire, Buckinghamshire and Northamptonshire) and nationally. She stayed at the ORHB when it became the Oxford Regional Health Authority (ORHA) in the mid 1970s, and became regional medical officer. Subsequently, in 1983, she was appointed as its first regional general manager when these posts were created following the Griffiths report on NHS management (1983). She was the only woman and the only doctor to be appointed to one of these 14 powerful positions.

Rosemary Rue’s most enduring legacy is almost certainly the changes she brought about which enabled women doctors to develop careers at the same time as having a family. In the Oxford region she set up a variety of part-time training schemes and ‘retainer arrangements’ which allowed women to take maternity leave without sacrificing all hope of returning to a career path. In order to do this she had to persuade and cajole local consultants and the medical Royal Colleges to support her. These schemes soon gained wider attention, and eventually they became standard practice all over the country. In 1953 Rosemary Rue had lost her job as a doctor simply for being married. Forty years later, not only were such attitudes and practices confined to the pages of history, but largely thanks to Rosemary Rue’s efforts, women medical graduates could chose to pursue any branch of medicine and know that they would not be at a disadvantage. Rosemary Rue was elected president of the Medical Women’s Federation in 1982.

Another of her legacies is the development of health services for Milton Keynes. Milton Keynes was designated as a ‘new town’ in 1967 and over the next 25 years grew from a green field site to a town with a population of some 200,000. Rosemary Rue’s vision was pivotal throughout this period in planning and implementing appropriate health services for the new town, as well as balancing those in the surrounding areas.

Those who were lucky enough to work with Rosemary will always be grateful for the experience. She had a quiet determination and shrewd political judgement, and usually managed to achieve her objectives. She had a broad knowledge of health services, and was equally at home discussing the latest surgical technology or the provision of community mental health services for the elderly. She worked hard, seldom leaving her office in the ORHA building (now officially called the Rosemary Rue building) before 7.30pm, and often a great deal later. Those who were still in the building would often put their heads around the door later in the evening in the hope of being rewarded with some good conversation about the issues of the day and a glass of cold dry sherry.

Rosemary Rue went on to a very active ‘retirement’ in 1988. At various times she was president of the Faculty of Community Medicine (now Public Health), president of the BMA (from 1990 to 1991), professor of public health at the London School of Hygiene and Tropical Medicine (when it was going through some difficult times and needed a steady hand), chairman of the Margaret Pyke Foundation and of the Wyndham Housing Association, and a vice president of the Alzheimer’s Society. She was actively involved with the Family Welfare Association and with the Worshipful Society of Apothecaries. She was made a Dame of the British Empire in 1989.

In her last few years Rosemary continued to take an active interest in health service matters, despite having to deal with both breast and colon cancer, which she did with immense courage. She died at the age of 76, at the cottage in Stanton St John which had been her home for nearly 40 years, supported by her sons and grandchildren, of whom she had always been immensely proud.

Related pages
Dame Rosemary Rue and the Married Women’s Training Scheme
Browse Indexes Return to Results
We use cookies on this website. By using this site, you agree that we may store and access cookies on your device. Find out more.