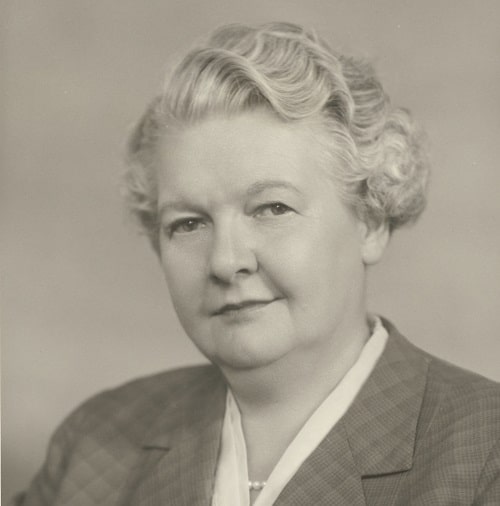 Albertine Winner was born in London. Her father Isidore Winner (formerly Weiner) came originally from the Netherlands; her mother Annie Stonex from this country. She was educated at the Francis Holland School in Clarence Gate, where she was head girl, and at University College London, where she took her BSc with honours in physiology, and then at University College Hospital, qualifying with the University gold medal.

In her early medical career she worked with and was much influenced by Sir Thomas Lewis [Munk’s Roll, Vol.IV, p.531] and Sir Francis Walshe [Munk's Roll, Vol.VI, p.448]. Walshe gave her an abiding interest in neurology, which was finally of great help in developing palliative treatment of motor neurone disease at St Christopher’s Hospice when she returned to clinical medicine as a final end to her varied and most distinguished career.

After a time as physician to the Elizabeth Garrett Anderson Hospital and the Mothers’ Hospital, Woolwich, she joined the RAMC in 1940, becoming lieutenant colonel and later consultant to the Women’s Services. This experience revealed her liking and aptitude for administration, and after a brief return to the Elizabeth Garrett Anderson Hospital she joined the Ministry of Health. Here she kept her intense interest in patients’ welfare, particularly in the chronic sick. She became deputy chief medical officer, the first woman to hold that office.

At this time, Sir Max (later Lord) Rosenheim [Munk's Roll, Vol.VI, p.394] persuaded her to become the College’s Linacre Fellow. She was not quite the first person to occupy this post, since Charles Newman briefly doubled up as Harveian Librarian and Linacre Fellow, but Albertine was the first to serve for any length of time - eleven years -and she certainly set the standard for her successors. As, again, she was the first woman to serve as a College officer, she might be regarded as a feminist ice-breaker; she did break ice, not as a feminist but simply as an extremely competent and reliable administrator who succeeded in getting to the top in what was at the time very much a man’s world.

As Linacre fellow, Albertine was responsible for developing the training posts that were to be recognized by the newly-formed JCHMT. She visited most of these posts herself until their number grew too great. She then appointed visiting teams to carry out the task, holding herself in reserve to lean on recalcitrant colleagues who were reluctant to accept the College’s recommendations.

She became DBE in 1967 as she retired, but this was but the beginning of yet another career as deputy medical director of St Christopher’s Hospice. This interest began in 1961 when she heard of the plans for St Christopher’s, the first research and teaching hospice, and joined in a ward round at St Joseph’s Hospice. Her clinical acumen and personal interest in people in need was at once aroused and she carried on a quiet campaign of advice and support for the Hospice from then on. It was typical of her that she should go on a refresher course in medicine before returning to clinical duties. As she said: ‘The moment I began to examine a patient my hands took over and I was back.’

Albertine worked at St Christopher’s part-time from 1967-73, helping to establish both its clinical and administrative standards and fill the rest of her time with many other interests. She was on the council of the Disabled Living Foundation; was one of a group of physicians who travelled to assess Issel’s controversial cancer clinic in Bavaria, and was an active member of the Medical Women’s Federation and its president in 1971. She retained her interest in the expansion of hospice work as part of a generally accepted clinical challenge. She was fond of describing it as ‘...just good medicine in a special setting.’

She became chairman of St Christopher’s in 1973 and was elected president in 1985, and was also much involved in founding the North London Hospice, with its special Jewish interest and inter-faith connexions.

Brought up in a Jewish home, she joined the Christian foundation of St Christopher’s as a ‘sympathetic agnostic’. In later years she returned to the faith of her fathers, fitting in as well as ever in the Hospice ‘community of the unlike’.

Dame Albertine’s interests were as wide as her medical career. A perceptive observer of art, she built up a valuable collection of Japanese prints, and she was an enthusiastic opera lover. She played tennis for the university, and retained her interest in sport and travel.

To some she appeared formidable, but to all she was kind, giving the best in sensitive and utterly reliable moral support. A superlatively good clinician, she finally became a cooperative and unfailingly courteous patient, much loved by all who had the care of her. Of her nursing staff she said: ‘They will always come’. Her patients and her many friends would say the same of her.