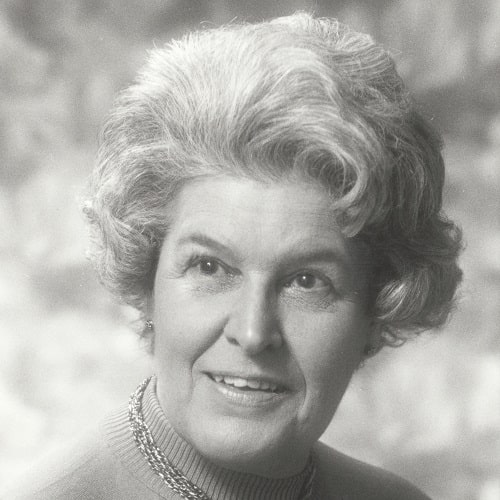 Christine Elizabeth (Tina) Cooper was the eldest daughter of William Francis Cooper, an analytical chemist and physician in general practice in Watford. Her mother, Christine Hall-Jones, died when she was six months old. Her father remarried and Christine had a close relationship with all her siblings. Her early education was at St John’s School, Bexhill-on-sea, during which she developed an interest in the welfare of children and later spent two years qualifying as a nursery nurse at Cromwell House in London. She soon realized that she should qualify in medicine if she were to use her gifts to the best advantage. She studied medicine at Girton College, Cambridge, followed by clinical work at the Royal Free Hospital, and graduated in 1945 after a distinguished undergraduate career.

After qualification Christine spent her early years in London as house physician, senior house officer in obstetrics, and first assistant in the children’s department at the Royal Free Hospital. In 1949 she was invited by Elsie Wright to visit the children’s department in Newcastle. She was captivated by the personality and philosophy of James Spence, later Sir James [Munk's Roll, Vol.V, p.386], and the following year became his senior registrar. In 1952 she succeeded Elsie Wright as consultant at the Newcastle General Hospital, where she built up a reputation as a gifted clinician and teacher.

Christine Cooper was always interested in the emotional as well as the physical needs of children, particularly those who were deprived. She therefore never worked full time in the National Health Service and devoted a few sessions a week to the wider aspects of paediatrics. Initially this led her to explore the problems of children who were fostered or adopted, and she became medical adviser to the Northern Counties Adoption Society. From 1960 she served on the council of the Association of British Adoption and Fostering Agencies. As a member of the Home Office departmental committee on adoption (the Houghton committee) she played an important part in producing the report which formed the basis of the 1975 Children’s Act.

She was one of the first paediatricians in Britain to recognize the extent and nature of child abuse - physical, psychological and sexual. She had a remarkable gift for talking with families and gaining their trust. Her clear vision of the need to protect children was combined with an understanding and compassion for stressed and damaged parents. Her wisdom and experience, gained through much hardwork and pain, meant that she was consulted widely, whilst her example inspired many paediatricians in training. She was a member of the Tunbridge Wells study group on child abuse, which guided national policy in the 1970s, and she succeeded Alfred White Franklin (q.v.) as president of the British Association for the Study and Prevention of Child Abuse and Neglect. She had close friends who were also involved in this subject, such as Anna Freud. Dermod MacCarthy (q.v.),and Henry Kempe, and her library of relevant books - which she gave to the University of Newcastle-upon-Tyne - was unique.

Christine’s interest in children extended beyond Britain. She travelled and lectured widely, and was an authority on cultural differences in child rearing. In 1964 she was invited to advise the government of Sierra Leone on child health services in that country and she worked there for two years. In the words of Davison Nichol, vice-chancellor of the University of Sierra Leone: ‘She developed the paediatric services of the nation to a high level by her constant encouragement and advice to those who worked with her and for her. She travelled widely in the interior, and established a country-wide service of immunization against measles and other children’s diseases. She saved many lives, and endeared herself to many by her directness, sympathy and warmth.’ A friend who worked with her at that time described a characteristic visit to a health clinic in the ‘bush’. When they arrived, dozens of laughing mothers with their babies on their backs were strolling in, and having walked long distances in the hot sun they made a rush for the standpipe. But Tina got there first and, to their amazement, no mother was allowed to drink until each had given her baby as much water as he or she could hold. Then the mothers drank, and this was followed by a talk on the dangers of dehydration in terms they could understand and in circumstances they would never forget. She was awarded the OBE for her work in Sierra Leone.

After she retired in 1983, Christine Cooper remained very active. She was invited to South Africa as a visiting professor, and it was a lasting sadness to her that she did not feel it right to accept an official invitation to a country whose children she longed to help. She continued to consult, advise and lecture virtually to the end of her life. She was thrilled that during her terminal illness she was able to treat a disturbed family which, as a result of her help and contrary to all predictions, was able to love and keep the baby.

Christine Cooper’s work for children was untiring and she spent long hours seeing families at home and in hospital. Through her example and teaching, she opened the eyes of the toughest organic medicine enthusiasts to the need to consider all aspects of the child’s environment. The majority of junior doctors who at first were taken aback by Tina’s apparent lack of need for nourishment and sleep ended by doing without much of either themselves and, contrary to their first reaction, remained her faithful followers and friends.

Tina also managed to have wide interests. She was knowledgeable about many aspects of the arts, and in particular of opera. She loved travel in which work and play were combined, and in the ten years between 1969 and 1978 she visited Rotterdam, Uppsala, Athens, Jerusalem and Bangkok. She had an extensive library of books on art, travel, history and philosophy, most of which she had read. But above all she loved her family, her godchildren and her friends. She had a remarkable capacity for friendship and, once established, her friendships were maintained by planned meetings and faithful correspondence. It was always a delight to visit her.

Tina Cooper was a remarkable person. She was tall, imposing and good looking and her intelligence, honesty and strength of character meant that she was held in awe by those who met her only formally. Yet she was essentially warm, feminine and a delightful, interesting companion who was dearly loved and respected by those who had the privilege to know her.