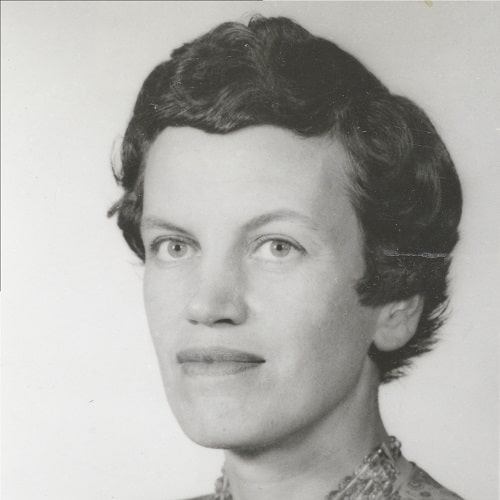 Catherine Annie Neill was a pioneer in the care of children with congenital heart defects. She was born in London, the first of four children of Sir Thomas and Lady Annie Strachan Neill (née Bishop). Although of a non-medical family, her career was undoubtedly shaped by her father’s leading role in the National Health Insurance Scheme of 1911 and her mother’s unfulfilled aspiration to study medicine. Her brothers, the Right Honorable Sir Brian Neill, Desmond Neill and Patrick, Lord Neill of Bladen QC, pursued careers in law and literature.

Her medical education at the Royal Free Hospital began her pathway to children’s health care. She completed her diploma in child health in 1946 and remained on at Queen Elizabeth Hospital for Children as a registrar working with Helen Mackay [Munk’s Roll, Vol.V, p.253], a pioneering woman member of the British Paediatric Association and the first woman Fellow of the College. There Catherine developed a particular interest in children with congenital heart defects, often going out in the middle of the night to admit and bleed those with polycythaemic crises.

Those were heady times; the war had brought rapid advances in both medicine and surgery. For children with cyanotic heart defects, the ‘blue baby operation’ was the first treatment for a usually lethal condition. In September 1947, the College honored Alfred Blalock and Helen Taussig of Johns Hopkins, Baltimore, for the pioneering surgical procedure that bears their names. Catherine recalled that lecture as the turning point of her career; resolving to seek additional training in the rapidly emerging field of paediatric cardiology.

In 1950, she travelled to the Hospital for Sick Children in Toronto, Canada, to work with John Keith. Her next stop was Baltimore, where a planned one year fellowship with Helen Taussig stretched to three. Taussig later said, “She was among the ablest I have trained.” In addition to her clinical training, Catherine studied human cardiac embryology at the Carnegie Institution in Baltimore and her work remains to this day the classic description of pulmonary vein development.

Catherine returned to Queen Elizabeth Hospital for Children in 1954 as a consultant paediatrician and joined J Maurice H Campbell [Munk’s Roll, Vol.VI, p.86] in analysing the natural history of adults with congenital heart defects. Two years later, Taussig summoned her back to Baltimore to be her first assistant and apparent successor. Later in life Catherine described herself as a “…mid-Atlantic person rather than an ‘expatriate’ as I have worked happily in both the UK and USA.”

At Hopkins, Catherine quickly became immersed in a new wave in clinical care: the newly perfected heart lung machine now rendered correction of some defects possible. She provided the medical care for the patients while the surgical teams operated with great sophistication and success. She also attended to the emerging psychosocial needs of survivors of heart surgery and trained a new generation of physicians.

Medicine was changing, attracting increasing numbers of women and Hopkins, with its tradition of unbiased enrolment, was an epicentre of this movement. Catherine, a tall handsome woman with her British accent, had an imposing presence. Yet she made all feel welcome with an uncanny skill with words, presentation and actions; a sense of theatre which she once identified as her second career choice, and a dry sense of humour that shielded a soft and reserved soul.

Indeed, her shyness was evident when visiting friends and family. An inveterate traveller, she would appear for a stay and on her own unannounced schedule set off quietly and unexpectedly with impeccable timing, leaving her hosts with a comfortable lingering sense of her presence.

Catherine taught well in all settings and particularly at the bedside. She had extraordinary diagnostic skills and was a master of the clinical examination: observation, palpation, percussion and auscultation. She was a fixture of the medical students’ early experience and she naturally became a mentor to scores of fellows, students and young faculty.

She played a key role in revolutionary studies of the aetiology of congenital heart defects. Teaming with Charlotte Ferencz, she began a ground-breaking population-based study of environmental factors associated with heart defects. Assessing cases and control patients in the Baltimore-Washington DC area, they proposed an elegant and powerful study design. Yet there were barriers to the study’s implementation. With her ever-present good grace and good will, Catherine breached institutional differences and personal rivalries to launch an analysis that identified genetic risk factors for the aetiology of many heart defects.

Catherine stayed on at Hopkins for the better part of six decades; never as the chief and always as the integrator, who maintained the program through five changes of leadership. She retired from the faculty first in 1989. She returned to an active clinical role in a time of great clinical need and in 1992 was promoted to professor of paediatrics and senior consultant in paediatric cardiology.

Catherine remained firmly connected to Hopkins. In her retirement years she worked as a volunteer in the institutional archives, taught physical diagnosis and wrote about caring for families and the history of paediatric cardiology. In the months prior to her death, she began yet another major project.

Her time at Hopkins spanned nearly half of the institutional history and thus she logically was called to consult on the movie Something the Lord made, which dramatised the golden years of Taussig, Blalock and Vivien Thomas. She never married. Her progeny are all those children whose lives she saved or transformed, and all those junior colleagues whom she mentored and supported in guiding successive generations of physicians.

During a long anticipated visit to London for a family celebration, she recognised her own terminal illness. Rejecting radical treatment for comfort and care, she spent the remainder of her days in places of fond memories, surrounded by her family who she loved deeply, dying gently in the city in which she was born.