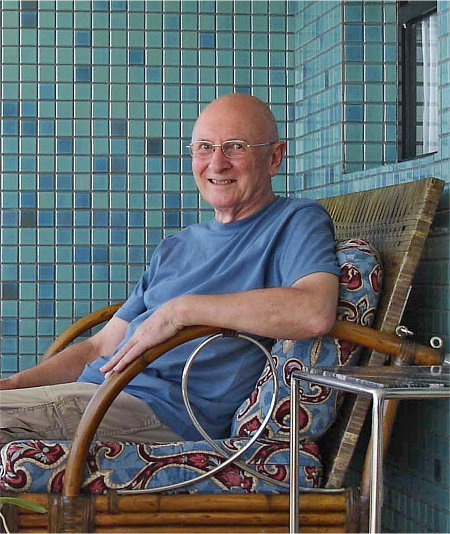 Brian Robinson was the first professor of cardiovascular medicine at St George’s Hospital Medical School, London. He was born in Carshalton, Surrey and educated at Sutton Grammar School during the Second World War when there was a shortage of teachers. Despite this, he received a very good education and quickly became interested in science, first in chemistry and then biology. Although it was suggested he should study mathematics at Cambridge, he decided on medicine, anatomy and physiology at King's College, London, with clinical studies at St George's Hospital, then at Hyde Park Corner. He was lucky to get a place in medical school; just after the end of the war many places were reserved for men who were being demobilised from the armed services. King's College was a fortunate choice: it was a place of scientific excellence, where, at about the same time, photographic and X-ray diffraction work was taking place, essential to confirming the structure of the genetic code.

Young doctors with grammar school backgrounds were somewhat rare at a time when most of his colleagues were privately educated and from wealthy families, although these circumstances changed quite dramatically after the Second World War. However, Brian was able to overcome the still somewhat rigidly class-structured profession of the time and, as a house officer at St George’s, he was one of the first to receive a small payment for very long working hours and extended periods of live-in residence. Previously, it was thought that gentlemen need not be paid during their early years in medicine.

After house posts, he carried out his National Service. Brian was destined for the Army, which he dreaded, but strings were pulled and he joined the Royal Air Force as a doctor, where he rose to the rank of squadron leader. He returned to St George’s, where he spent the rest of his career, becoming a senior lecturer, later a reader and then the first professor of cardiovascular medicine, an appointment which acknowledged his preeminent contribution to his chosen field of research.

Brian was by character uninterested in the rivalries of medical school politics or career advancement through building up a large department and didn't enjoy attending long committee meetings. He chose instead to concentrate on research and teaching, both areas in which he excelled. Antony Dornhorst was an early influence and Brian considered that he had a brilliant mind, but he tended to be pessimistic as to chances of success in new avenues of research. However, at St George's in Tooting, Brian doggedly continued to research into the mechanisms of peripheral vein dilation and arterial blood flow, inspiring his colleagues with whom he collaborated.

With Dornhurst in London he published papers on human pharmacological studies. During a two-year period of research at the National Institutes of Health in Bethesda, Maryland (from 1965 to 1967), he published with Eugene Braunwald – the first to define the pathophysiology of hypertrophic cardiomyopathy – and with Stephen E Epstein, chief of the cardiology branch of the National Heart, Lung and Blood Institute. Back in London, over a 30-year period, research colleagues included Sir John Vane, J R Collier and Patrick Vallance, among others.

Vallance, who later went on to do important research in related areas, described how Brian helped him when he was a young doctor. As he was starting his own research career, Brian was ‘…a personal inspiration…someone whose clarity of thought, conceptual insights into the cardiovascular system, generosity with his time and help were all of great importance’. He remembers Brian's undergraduate lectures as certainly one of the things that inspired him to study the cardiovascular system.

Brian was able to advance research with great brilliance and distinction, and was widely admired as an inspirational teacher and researcher. Always extremely modest and reserved, he chose not to seek credit for innovation, yet somehow this reserve undoubtedly contributed significantly to his reputation for integrity within a competitive field.

As a child, Brian had enjoyed holidays with his aunt in Dorset, where she nurtured his interest in plants and wildlife. He had always loved the west of England and took the opportunity to share a second home with his civil partner, Sheridan Tandy, in Milverton, Somerset, the village where Thomas Young, another St George's physician, had been born. Then, after retirement, Brian left Wimbledon in south London to buy, with Tandy, an ancient manor house near Taunton, where they lived for a further 25 years of the 45 years they spent together.

In 1974, Brian joined the LGBT counselling organisation, London Friend, offering medical advice alongside psychologists and social workers to help bring about some fundamental social changes. In this respect, as in others, he proved to be a quiet pioneer. Through a connection formed at this time, Brian received a request to join a committee within the HM Prison Service advising the Home Office. In 2014, he worked on methods to alleviate the risk of HIV infection amongst prison inmates and collaborated on training programmes for prison staff.

After a teenage conversion to the Roman Catholicism, Brian later turned to Buddhism for faith and inspiration. In due course, he became chairman of trustees of the Devon Buddhist Vihara and a Buddhist chaplain at Dartmoor Prison, Devon, where his extraordinary ability to impress everybody with his sincerity and kindness, and the ease with which he could communicate with the inmates, was appreciated by both prison staff and inmates alike.

Towards the end of his life, he moved to Wapping in London and died at the Royal London Hospital, Whitechapel aged 91 years after a six-month illness.