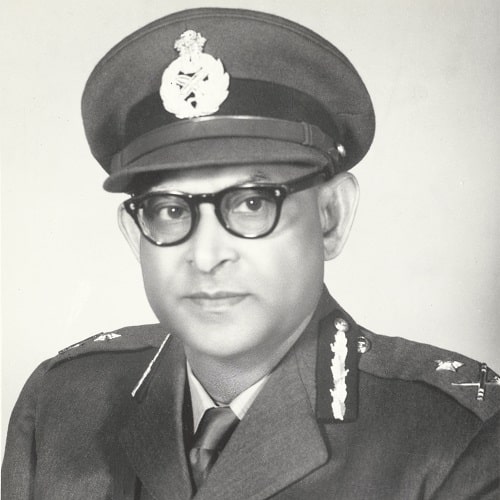 Lieutenant general Bidya Pati Bhattacharjya had a distinguished career in the Indian Army Medical Corps, eventually retiring as director general of the Armed Forces Medical Services. He followed his family’s record of public service - his father worked for the local state government and his mother’s family were civil servants. He was born in West Bengal, but grew up in Bihar State, in Eastern India, where he attended a local high school. He went on to study at Patna University, completing the MB BS degree from Prince of Wales Medical College and Hospital in 1935, achieving top grades. He continued his medical training in the UK.

On returning to India in 1937 he began a military career, joining the Indian Medical Service, later to be renamed the Army Medical Corps. During the Second World War he served in the Middle East, travelling in Persia and Iraq. He was later involved in the Chinese operations of the early sixties.

In service he was a medical specialist in various field and peace hospitals, consultant in psychiatry, adviser in various commands and associate professor at the Armed Forces Medical College at Poona. From 1957 he served in several senior administrative posts, including director of medical services for the Army. He achieved national and international recognition, becoming a fellow of the Academy of Medical Sciences of India in 1967 and serving as president of the Indian Psychiatric Society. His army career was honoured when he was mentioned in despatches in 1954 and received the Param Vishit Seva medal in 1969.

He published numerous articles and wrote Army medicine and allied topics, New Delhi, Army Educational Stores, 1968. Writing was one of his principal interests. He wrote literary works under the pen name Ban Bhatta, and was awarded the prestigious Ananda prize by the All India Bengali Literary Society for his translation of Ghalib’s verses. His other work included a translation of Kalidasa’s Kumar-sambhava and Raghuvamsa, and a philosophical treatise based on the teachings of the Gita and Upanishads. He also listed sport and drama among his interests, acting and directing Tagore’s plays. At medical college he played football and cricket.

After his retirement in 1969 he continued to be involved in humanitarian work, offering free consultations and working as the chairman of the Cheshire Home at Ranchi from its beginnings to 1977. He was chairman of several educational institutions.

He married his wife Rani Bhanbani in 1934 and had one son and three daughters. He died of a lung infection in his home city, Calcutta, in 1993.